It’s Monday night and in a hotel on the outskirts of Istanbul a group of exiled Syrians, eyes red with exhaustion, are allowing themselves a small moment of satisfaction.

After days of discussion – frequently heated – organisers of the Syrian National Council (SNC) movement feel they have come as close as anyone to forming a nationally representative body that can begin to offer an alternative voice Bashar al-Assad’s regime in Damascus.

“What happened [on Sunday] was a breakthrough,” says professor Monzer Makhous, a Syrian exiled in France, and one of the newly-designated committee members with a foreign affairs portfolio on the new provisional 29-member Secretariat. His hands tremble with fatigue. “We have been waiting for this for a long time. Only yesterday did we come to an agreement between all political groups.”

One of the last remaining obstacles appears to have been conservatives represented by the sheikhs of the Syrian tribal groups. Set up obstinately in a separate hotel in Istanbul, the sheikhs were looking for an alliance only with the Syrian Muslim Brotherhood. But when the Brotherhood decided to pledge allegiance to the aims of the SNC, tribal leaders had the choice whether to follow their exampleor be left out. They came on board.

For longer-standing members of the SNC, the satisfaction is fleeting because the crisis in their country is so painful.  A commitment to peaceful protest as the only legitimate form of opposition is creaking under the strain of a violent and sustained Syrian government crackdown.

“Every day we are living with unimaginable brutality on the streets and in the prisons,” says Hassan Hachimi, another secretariat member living mainly in Canada, but with close family still in Syria. “It is the prisoners I really feel for… When we are receiving their dead bodies we are seeing the brutality, the torture they have gone through – it is indescribable.”

Hachimi fled his hometown of Aleppo aged 16, never to return, after his father was persecuted for involvement in the Muslim Brotherhood. Despite a successful career as an architect and academic, the pain of exile is written on his face.

“We don’t want to go down the road of international intervention, but the people are now crying out for help. They are starting to ridicule our demands to keep it peaceful.”

It’s clear that some in the alliance are now willing to contemplate a shift to armed resistance and international involvement. But the risks of this option are also clear to all. Unlike Libya, where there was a workable international consensus on intervention – including most importantly the Arab League – there is no agreement on Syria. Everyone is concerned that an appeal to a body like NATO, would attract rivalrous and unhelpful involvement from other countries who do not agree.

“We don’t want a Libyan scenario,” says Hachimi “It won’t help us in the same way.” The statement issued in Istanbul said the outside world had a “humanitarian obligation to protect the Syrian people”.  For some members of the SNC, that could mean a no-fly zone, but for others this is a step too far.

The SNC is asking everyone who will meet with them for expertise and advice on how to protect civilians. “We have to think out of the box,” says Hachimi.

For professor Monzer Makhous, part of that could be a protected zone along the Turkey-Syria border “a safe area for defectors and refugees”.  It would – in essence – mean the creation of a temporary ‘revolutionary province’ under Turkish protection. But this is something the Turkish government – while highly critical of Damascus and verbally supportive of the Syrian people’s rights – is at best ambivalent about.

One of the most energised delegates at the hotel was Abdul Basset Sieda, Kurdish SNC representative of the Syrian Democratic Organisation, based in Sweden. “Sweden has been good to us,” he beamed.

Syria’s Kurds have been squeezed even harder than the Kurds of Turkey and Iran and many of the Kurdish PKK fighters in Turkey are of Syrian origin. Turkey had hoped for President Bashar al-Assad’s co-operation on bringing their own Kurdish ‘problem’ under control but now Syria’s Kurds are an integral part of the Syrian peoples’ new struggle.

There was discussion at the SNC conference in Istanbul of what might have happened to Syrian Lt Col Hussein Harmoush, to date the highest ranking Syrian military defector to arrive in Turkey. He disappeared on August 29 from a Turkish refugee camp. The prevailing belief – denied by the Turkish Foreign Minister – was that Turkish security forces had traded him with Assad’s regime for wanted PKK members in Syria.  When Harmoush appeared on Syrian TV in a televised confession he himself said he was “shocked to be used in a trade”.  Turkish authorities meanwhile said they have arrested one Iranian and two Syrian agents in Turkey as part of their investigation into Lt Col Harmoush’s disappearance.

Conference co-ordinator Adib Shishakly and SNC member told me he felt under constant threat and surveillance from Damascus. But he mentioned it as an aside, as the inevitable price they have to pay. Eyes swollen from days of little sleep, said he’d lost track of the threatening phone calls and hostile attacks on his Facebook account. “I get assassination threats all the time,” he sighed.

The extent of the threat is documented in an Amnesty International report, released on Tuesday which documents a systematic campaign of intimidation by the Syrian regime against activists all over the world – and their relatives back home in Syria. Amnesty asked Syrian exiles’ host countries to do more to protect them from the Syrian agents carrying out the intimidation.

In the meantime, international government representatives met members of the SNC in Ankara two weeks ago, keen to establish how competent and representative this newly formed body really is. Under the stewardship of Canada, the meeting included national representatives from Europe and the US. The SNC members asked for international support and recognition, a declaration of illegitimacy or a repudiation of the Assad regime, and any amount of expertise and advice for the fledgling opposition. They told me they felt warmly welcomed.

But they are still questioning what genuine support there is from their Arab brothers. A meeting with Qatar a few weeks ago ended when the Qataris appeared prepared to defend “the security of the regime”, according to Shishakly. For the SNC, the starting point is the one issue on which all its diverse members agree: The Assad regime must end, and its members face justice.

SNC members explained that the world needs to recognise that the consequences of the Syrian uprising, together with a failure by the international community to help Syria resolve the conflict and protect innocent citizens would be serious – and would spread far beyond Syria itself.

Makhous warns of a massive regional refugee crisis, and a new explosion of terrorism from alienated young Syrians if they feel the world has abandoned them. It would be like Iraq, like Afghanistan, he says.

“This is where the position of the West and of the Arabic countries is very decisive – it is the key factor in the situation.”

But so far the UN Security Council has been unable even to agree to holding a vote on sanctions against Damascus, although European members on Tuesday pushed once again for a resolution.

“One must be a big dreamer to think the regime will be over in a few weeks, or even a few months,” says professor Makhous. “But also now no one can imagine this regime will stay – it’s only a question of how and when it will fall.” 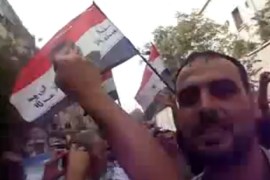 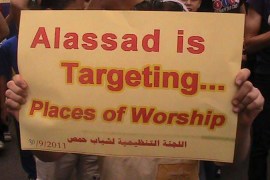