By
Sangwon Yoon and
Mohammad Alsaafin

One thousand and twenty-seven Palestinians for one Israeli – this is the deal made between Hamas and Israel last week.

The agreement has been dubbed “the Shalit swap deal” – named after Gilad Shalit, the 25-year-old Israeli soldier who has been held in the Gaza Strip for more than five years – and will see Palestinian prisoners released in two phases.

The first phase of this “historic” deal will take place on Tuesday, when Cpl Shalit will return to his home in Mitzpe Hila in the western Galilee, to his parents Noam and Aviva and his older brother and sister.

But to where and to whom will the first batch of 477 Palestinian prisoners return? Who are the Noams and Avivas of these hundreds of Palestinians who will be released in exchange for Gilad?

“Mohammad was half-way through 11th grade when he was arrested. He was focused on school and a hard worker. He worked after school at a garage, he would just come home, eat, change and go to work. On weekends, he would work 12 hours a day to help us.

“He was arrested with a group of friends one day after going out to eat after work.

“An Israeli patrol grabbed them and took them to a military base. They abused them. During the arrest they broke Mohammad’s leg, and he was on crutches for three months.

“At his trial, he was in very bad shape. His left leg was broken and they had beaten him on his right leg, too.

“The charges were trumped up and he was convicted of throwing a petrol bomb. Two months later, his cousin Mojahed was arrested on the same charge.

“Mohammad will turn 18 in 20 days, and we haven’t seen his or Mojahed’s name on the list of prisoners to be freed, even though Hamas said all children will be freed. So we will see.

“I can’t wait to see my son freed, but if he doesn’t get released earlier in this deal, I have to accept his fate.

“I can’t describe how hard it is to be away from my son like this.

“If Mohammad has to serve a three year sentence to ensure those serving 20 years or more go free, then so be it.”

“The Israelis accused Duaa of transporting an attacker to Netanya, an industrial city on the coast.

“For the first year or so after her arrest, we had no idea where she was because the Israelis didn’t tell us. Since then, we have visited her whenever we could.

“It usually takes us five or six months for each permit. And sometimes after we get that permit, we get to the prison, and they turn us back and we have to start again.

“Duaa is my only daughter, I only have her and my son – who was seriously wounded by the Israelis. So you can imagine what it means to know she should be coming home soon.

“The night I heard the deal was agreed, I was sceptical … because we had heard several times before of almost-complete deals which never happened.

“But this time, when they confirmed it, I fell on the floor and started sobbing. I was over the moon that I would be seeing Duaa again.

“She only had a semester left at An-Najah University when she was arrested. I want her to finish her degree and just live. We have had enough suffering.

“I don’t know how I’ll react when I see her. I might fall. We’re having a party to welcome her back, but I don’t know what state of mind I’ll be in. Prison was so hard. I haven’t touched her for ten years.

“Even when we visit, they put a barrier between us and we could only speak on the phone. They treat them very very badly in jail.

“I thank God that those who pulled this off insisted on releasing the women, and I hope soon we will see all of our prisoners free.”

“My father was arrested on May 23, 1987, for killing the Israeli army commander of Nablus.

“He was a father of five on the day of his arrest. His oldest daughter, Sawsan, was 12 years old and his youngest was two-weeks-old.

“Today, Sawsan has a daughter who is in her last year of high school. She was born while he was in jail, but he always promised her to take her to school one day. That was his dream.

“My father was a poor builder. He always found it difficult to reconcile the fact that he was too poor to finish his education.

“Even when in jail he always instilled in us the importance of education. We all have university degrees, and my brother is finishing his doctorate in the UK.

“I was also in prison for a while and spent some time with my dad. We shared a cell and he used to tell me how much he looked forward to coming back to his house, back to his family, back to his land.

“I haven’t seen him in a while. Because of my previous imprisonment I’m allowed to visit only once, though we can’t come close or touch. My older sister used to visit, but this year the Israelis suddenly, and without explanation, stopped issuing her permits.

“We received information that he has been leading the hunger strike in Eshel prison, and that the Israelis transferred him to solitary confinement. We don’t know what has happened to him since.

“When we first heard about the swap, we were elated. You can not describe the feeling you get when something you’ve waited for for 25 years is almost upon you.

“But then we found my father’s name among those who are being deported. We were absolutely shocked.

“I know this was a complicated deal with years of negotiations, but I think I would have preferred Hamas to hold the Israeli prisoner for another 20 years so to ensure everyone [all Palestinian prisoners] comes home. People are trying to comfort us, saying deportation is better than jail.

“Maybe, but deportation is not easy. Not at all.

“They say someday he will be allowed back, but the Israelis have a long history of deporting Palestinians. And we know from experience that it is very, very rare for them to ever be allowed back. Nobody has spoken to us, nobody has explained anything to us. We don’t even know where he will be sent to. It is very difficult.

“But I don’t understand why someone like my father would be deported, and why Hamas agreed to this.

“He has lived the last 25 years just dreaming of returning to his house.

“Now he is going somewhere abroad, nobody knows where, and will keep dreaming of coming home. The deportation is an unexpectedly bitter pill we’ll just have to swallow.”

“Mahmoud was in his last year of high school when he was convicted of stone throwing. He was sentenced to three months in prison.

“I hope nobody ever has to go through what we went through. The moment I saw him at his first trial … I will live and die and never will forget the expression on his face – the humiliation and the emptiness.

“From that day on, we never felt even content. We haven’t haven’t eaten right. I sent the money for the 500 shekel fine today. His sentence ends on Thursday anyway.

“He’s been in jail for a several months so I don’t want to throw a big party in the streets.

“Lina was accused of what the Israelis call ‘assisting the enemy during wartime’ and of belonging to Islamic Jihad.

“We can not wait to see her again. Our feelings can’t be described, we want to see her and hold her again, to have her among us. But our happiness will be still tampered by the fact that thousands will be left behind in jail.

“We are not sure exactly if and when she will be among those being released, so we’re being careful but we’re hopeful. We haven’t planned a party or anything. Our local town committee has prepared some things, but we’re careful until we’re sure she comes out.

“Being inside the green line, this to us signifies that the Arab people are one, whatever borders and divisions [the Israelis] try to place on us. We Palestinians are one people.

“We visit twice a month, every other Friday. She is strong, even though they face constant abuse in jail.

“Our feelings can’t be described, our hearts have been tired, we can’t wait to see her again. We are not sure exactly if and when she will be among those being released, so we’re being careful but we’re hopeful.

“The list that Hamas released has Lina’s name, but the Israeli list excludes her. We are not sure what’s going on. We don’t know what the Israelis are doing, they’re playing some sort of game.

“Nobody has spoken to us or explained anything.

“We are confused and very disappointed. Hamas explicitly said all female prisoners will be freed. 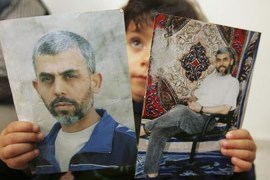