Much has been written about the role technology played in bringing social and political change across much of the Middle East and North Africa, but less is known about the technological revolution that is taking place and transforming people’s lives in sub-Saharan Africa.

It is estimated that by 2015 sub-Saharan Africa will have more people with mobile phone network access than electricity access at home. People with internet and no home electricity will reach 138 million, according to the Cisco Global Mobile Data Traffic Forecast for 2010-2015.

This deep and rapid mobile penetration is catapulting developing countries into the 21st century and bringing new and previously unimagined opportunities. While schools in the developed world enforce strict policies to keep mobile phones out of the classroom, African schools and universities are now exploring the use of mobile technology to assist teaching.

In Tanzania, it is estimated that more than 50 per cent of children that complete primary school are unable to adequately read or demonstrate adequate maths and science skills, according to the International Youth Foundation (IYF).

To improve educational quality and student achievement, a number of primary schools in the country are now using mobile and video technology to assist teachers.

Under the BridgeIt initiative, known locally as Elimu kwa Teknologia or Education through Technology, teachers download video content using Nokia N95 mobile phones, which are connected to TVs in their classrooms, allowing rural schools and communities access to a digital catalogue of locally-developed or adapted educational content.

Videos are typically four to seven minutes long and take one to two minutes to download from the server. Each video comes with a lesson plan designed to allow teachers and students to interact with the ideas introduced by the video.

The use of videos in the classrooms is not new in Africa. Other schools, especially private ones, often use videos or DVDs, but according to BridgeIt advisor, Joseph Mattogoro, the programme: “Is unique because it uses mobile phones to download the videos. The use of mobile phones to download is more efficient than sending video packages to all the schools, and the storage of content is more reliable.”

The initiative has received a positive response from teachers and students.

“Watching videos makes it easier to understand the teacher, especially during the science lessons because I see what she is trying to explain. During examinations I remember what I saw in the class and it helps me answer the questions,” said Sia Idrisa, 13, from Kinondoni primary school.

“I have 70 students in my class, the use of video helps me stimulate interest and keep their attention as they seem to enjoy learning in this way. Most of my fellow teachers appreciate the use of this technology in the class, but at the moment we only have one TV and mobile phone per school, which isn’t enough,” said Dorika Myamataga, a teacher at Bryceson primary school in Kinondoni, Dar Salaam.

BridgeIt is currently being implemented in 150 schools, seven regions and 17 districts in the country by IYF in partnership with the Tanzanian government, Nokia and Vodacom with funding from USAID.

Implementing the programme has its own challenges, such as electricity shortages, especially in rural areas as well the cost of preparation. To make sure the programme is sustainable and replicable, local governments have started budgeting for BridgeIt. Other African countries have also shown interest in the initiative.

In South Africa the concept of using mobile technology to support distant learners is also gaining ground. Pretoria University considers it an extension of e-learning – where distance learners use the internet to access materials to support their studies.

Dolf Jordaan, the head of e-learning at Pretoria University, said the standard e-learning model was not feasible in this case because “technological profiling showed that less than one per cent of students had regular access to the internet whereas 99 per cent out of students had mobile phones”.

Following a successful pilot project, the university now uses mobile technology to support its paper based distance learning programmes offered to postgraduate students in deep rural areas with little or no internet connection.

Distant learners can now dial a number and listen to pre-recorded mini lectures about concepts which they might have trouble understanding. The university also sends bulk text messages during the academic year to remind students of deadlines, examination dates and face-to face contact sessions they have to attend.

Since the delivery of mail in rural areas in Africa can be slow and unreliable, the immediacy of communication offered by mobile phones means the benefits of using text messages to communicate with students were almost immediately felt.

“There was an increase in student participation. More students registered on time, attended face-to-face contact sessions and respond quickly to text messages. This engagement and participation provides support and makes it easier for students to complete their studies,” said Jordaan.

He added: “While the university currently uses mobile technology primarily as an administrative and supportive tool rather than a primary mode of learning, there is potential to expand the use of mobile phones to support education in sub-Saharan Africa.”

An app for that

The use of mobile technology in Africa is not limited to the field of education. In Kenya, high mobile penetration spurred the development of ground-breaking applications that are positioning the country as a regional leader in technology.

Ushahidi, which means “bearing witness” in Swahili, is a website that was developed to map the post election violence in Kenya in 2008. The website depended on eye witness reports from Kenyan citizens who submitted the information via the mobile phones. This information was then used to update the crisis map on Google maps; the information collected highlighted areas most affected by the violence and allowed NGOs to act fast in delivering aid.

It has since received international praise and has been used to map out the earthquake in Haiti and China, but the application that has made the most difference to the lives of ordinary Kenyans is perhaps M-pesa, a mobile phone based money transfer service.

M-pesa users can deposit and withdraw money, pay their bills and receive or send money to other users, using only their mobile phones. The application, developed entirely by Kenyans, removes the need to use a bank, and for people in rural areas receiving remittance from their relatives has never been easier. 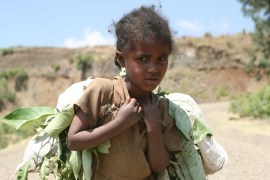 The extraordinary story of how a large rural area of Ethiopia is taking itself out of poverty.