Seriously injured in a shell attack, his Tamil Tiger comrades dead, Mano (pseudonym) tried to end his own life by biting on the cyanide pill that, like all hardened fighters, he wore around his neck. But an elderly woman nearby rushed to give him water and he survived. Alone, he languished on the sand for six days, surrounded by the bodies of his friends and the ruins of war.

“There wasn’t anybody there, not a drop of water. I was just lying there in the sun,” he said as he recalled the final days of the fighting between the Liberation Tigers of Tamil Eelam (LTTE) and the Sri Lankan military. “Then I heard voices and, 200m away, saw soldiers advancing. They took me away.”

More than 11,000 people were detained by the Sri Lankan authorities at the end of the war on suspicion of being members of the Tamil Tigers, who fought a 26-year battle for an independent Tamil homeland. Some gave themselves up, but no detainees have access to lawyers and few are charged, their families left to find out for themselves the location of their loved ones. More than two-thirds have now been released, but amid a pervasive military presence many struggle to resume a normal life.

“A sense of impunity and that the worst can happen is still prevalent,” said Jehan Perera, Executive Director of the National Peace Council in the Sri Lankan capital, Colombo. “There’s been no break with the past.”

Mano spent nearly a year in a government-run rehabilitation camp and has been living with his family in the northern town of Vavuniya since his release in April 2010. The rehabilitation programme includes psychological counselling as well as skills training. Although some former LTTE members have found good jobs in government-run reconstruction projects, many find it hard to get regular work. Mano occasionally works in a shop but relies mainly on his family for support.

With a continuous military presence in the former conflict zone, few are prepared to risk association with former LTTE members, and LTTE families don’t advertise their past. There are numerous bases along the A9 road north to Jaffna and smaller camps spread among civilian villages across the Vanni. Military approval is required for large gatherings, and soldiers will often enquire about smaller meetings. Few of those interviewed for this story wanted to reveal their identities and would meet only at a “safe” house.

Markandu Arulananthan is an exception. He’s been displaced numerous times in the course of the Sri Lankan conflict and now lives with his wife, daughter and two sons in a rented house in Jaffna. But his eldest son, Ayengaran, who was taken by the Tigers in 2002, is missing and Arulananthan’s search for him has yielded little but a growing record of his fruitless search.

He’s alerted the ICRC and the Human Rights Commission, visited known detention centres, army camps and police stations, noting diligently the details of every meeting in a small Red Cross notebook. Arulananthan is convinced Ayengaran is still alive but the search and the uncertainty has exhausted him, and his family.

No safety in peace

Having lost a son and her husband – both members of the Tigers – to the fighting and with another son in detention, Mathi is searching desperately for her remaining son who went missing in the final stages of the conflict.

It happened in Mullivaikal, a village squeezed onto a narrow spit of sand between the Nandikadal lagoon and the Indian Ocean on the island’s northeastern coast, a place declared a civilian “safe zone” by the government. As the Sri Lankan army advanced, the coconut husks and palmyra leaves littering the ground caught fire. It was in what Mathi describes as an “inferno” and under almost constant bombardment, that her son disappeared. Like Arulananthan, she has kept a file of her increasingly desperate search.

“It’s important that we should be told where he is,” Mathi said. “Whether he’s injured or whether he’s dead he would ultimately be with the military because there was nobody else there. They must know.”

But even those who’ve found their family members still struggle. Few can afford the cost of travelling to detention centres for visits or the costs of legal advice. In their desperation, some find themselves cheated.

Vidhya (pseudonym) lives with her sister and brother-in-law in the village where she was born. Her family and her lawyer are the only ones who know that her husband was a Sea Tiger and surrendered to the army at the end of the war.

It took Vidhya two months to find out where he was but she’s now heavily in debt, having borrowed 500,000 rupees and pawned her sister’s jewellery to pay people who convinced her they could get her husband freed. The jewellery will be forfeited if Vidhya, who has no income, doesn’t pay by the end of this month.

“Without him, I don’t have anyone to talk to, anyone to share my problems with,” she says. Her four-year-old son, sitting on her lap, gently wipes the tears from her face as she speaks.

“People say we have peace but the peace we have is a negative peace – the absence of war and violence,” said Perera. “We don’t have a peace where there’s reconciliation and trust. That’s what we need to work towards.”

The Tamil National Alliance, which swept recent local elections in the Northeast, has asked the government to release the names of all those in custody and their place of detention, but it has yet to do so.

In some ways, Mano’s family was lucky. Their son was returned to them.

But for others, the agonising wait continues. 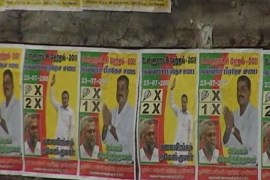 Local polls are the first since the end of ethnic conflict. 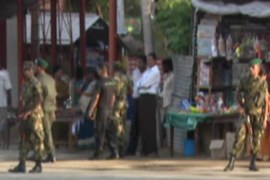 Minority Tamils say military retains too strong a hold over their daily lives. 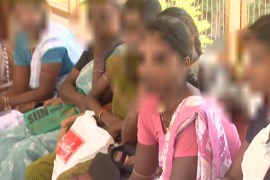 Young women tell Al Jazeera about rapes and sexual exploitation, in some cases by officials and army. 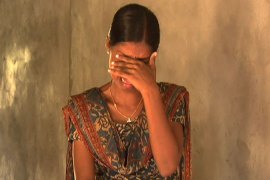 Sri Lankans are rebuilding after decades of conflict but for many the traumas of war are still raw.