As both houses of Congress began debating the 11th-hour debt limit deal hashed out Sunday night by senior lawmakers and the White House, neo-conservatives and other national security hawks complained bitterly Monday that the final package may force major cuts in defense spending in the coming years.

“If this deal governs policy for the next decade, it will be hard for the US to remain a sole superpower,” warned Weekly Standard editor and leading neo-conservative ideologue William Kristol.

“This is the best day the Chinese have ever had,” he went on. “This deal embodies a vision of America in decline,” he added.

Former Acting US Ambassador to the United Nations, John Bolton – whose analysis bounced all around the right-wing blogosphere Monday – was no less hyperbolic, calling the possible military implications of the deal no less than “catastrophic”.

“Make no mistake, this deal, by risking massive defense cutbacks, potentially points a dagger at the heart of our national security,” Bolton, who now sits at the American Enterprise Institute, warned.

More dovish military analysts, on the other hand, also expressed disappointment with the package, albeit for entirely different reasons.

“The proposed deal does not go far enough in reining in a military budget which in real terms is higher than at any time since World War II,” noted Lawrence Korb, a senior Pentagon official under Ronald Reagan and currently with the Center for American Progress (CAP).

“In the short term, the budget deal crafted by the president and the congressional leadership gives the Pentagon virtually a free ride,” complained William Hartung, director of the Arms Security Project at the Center for International Policy. He noted that military spending will be reduced by less than one per cent at most over the next two years, according to the deal and that bigger cuts would only take effect in 2013.

The package, which must be passed by both houses and signed by President Barack Obama before the close of business Tuesday to ensure that the government can keep paying its bills, would lift Washington’s current debt ceiling of $14.3tn and require cuts in projected federal spending by some $2.4tn over the next decade.

Of those cuts, between $900m and $1tn will be taken from discretionary programmes over the next ten years and cannot be made up through tax increases or other forms of revenue “enhancements”.

Of that total, up to $350bn may be taken from the Pentagon, or $50bn less than what Obama had already told his military leadership to plan for.

The remaining $1.4-1.5tn in savings – which, unlike the first tranche, could be achieved by reforming the tax code, as well as by programme cuts – will be determined by a new, 12-member congressional committee divided equally between Republican and Democratic lawmakers.

It has a deadline of late November – in time for the Thanksgiving holiday – to formulate a package. It, in turn, must be approved by Congress by the Christmas holiday, in late December.

If, however, the committee fails to agree on a package, or if either house of Congress fails to approve it, then across-the-board cuts totalling $1.2bn would automatically take effect.

It’s that possibility that alarms the hawks, who have been railing against the $400bn in cuts over the next 12 years already ordered by Obama and endorsed – albeit without much enthusiasm – by the former Pentagon chief Robert Gates and the military chiefs in April.

“It’s hard to see what incentive there is for the committee to recommend anything very different from the default 50-50 split now enshrined in the sequestration – in which case the defence budget is going to have to eat another $500-600bn,” Kristol wrote on the Standard‘s blog.

The Pentagon’s current base annual budget, however, stands at about $550bn, or more than the military budgets of the 20 next-biggest militaries combined. When the costs of the US wars in Afghanistan and Iraq are added, the total budget will exceed $700bn in 2011, or almost twice what the Pentagon was spending before the 9/11 attacks.

In addition to its operations in Iraq and Afghanistan, the budget is based on the post-Cold War notion that Washington should be able to fight and win two major conventional wars at the same time, a strategy whose relevance has come under increasing question given the degree to which the country has found itself engaged in entirely different kinds of combat over the last decade.

As the deficit issue has loomed ever larger on the political horizon here, particularly after the eruption of the 2008 financial crisis, a great debate over the defence budget’s future has been building steadily.

Most Democrats have called for deep cuts, while Republicans have been split between military hawks, like Kristol and Bolton, who argue Washington must maintain its global dominance at all costs, and deficit hawks, who say defense should not be exempt from the overriding need to cut the deficit.

But Pentagon and independent hawks have argued that such cuts would require major changes in US defense strategy that these commissions have not taken into consideration. And the White House has declined to endorse the commissions’ recommendations.

“To avoid reductions that are arbitrary and capricious requires clarity of strategic purpose,” noted Andrew Bacevich, a retired Army colonel at Boston University who has published a number of books critical of US Cold War and post-Cold War strategy.

“The big question is not how many billions should come out of the Pentagon’s bloated budget,” he said. “No, the big question is: given our strained economic circumstances and in light of the monumental catastrophes of the past decade, what is America’s proper role in the world? Simply reciting cliches about ‘global leadership’ won’t cut it. The time to make hard choices is at hand,” he said.

Jim Lobe‘s blog on US foreign policy can be read at http://www.lobelog.com/. 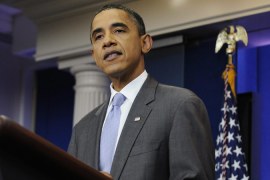 Details of US debt plan

The hotly debated inner workings of the compromise must still be approved by US congress. 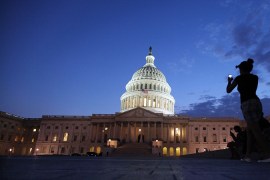 Vote due on US debt compromise deal

President Obama and congressional leaders agree to lift the ceiling on US borrowing before August 2 deadline. 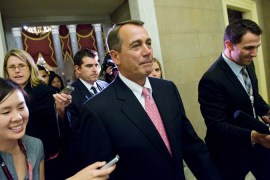 US senate due to vote on debt deal

Deal to avoid default already passed by House of Representatives, but fears of credit downgrade persist.