Nine years ago, Bhagwati Devi Gautam was a field labourer in Rukum, one of Nepal’s worst insurgency-hit districts. Hurrying to attend a programme on the occasion of International Women’s Day, she was forced to halt at a police checkpoint for the mandatory examination of her handbag.

With dozens of people waiting to have their belongings checked by gun-wielding policemen, the then 40-year-old tried to sidestep the queue.

There was a flash of blinding light and a peal of thunder, and Gautam knew no more.

When she regained consciousness, she was told she had stepped on a landmine, and that the doctors had to remove half her right leg.

“I regard the incident in two different ways,” said Purna Shova Chitrakar, coordinator of the Ban Landmines Campaign Nepal, a non-profit organisation founded in 1995 to raise public awareness about the loss of life and property caused by mines. “It was undoubtedly a tragedy. But on the other hand, it was a turning point, exposing the hollowness of the government’s claim that it was not using landmines.”

The Bhagwati Gautam incident created a furore, forced the government to acknowledge that it was using mines, start fencing them off and plant warning signs. “It also drew international attention to Nepal as a country using landmines,” Chitrakar added.

But while the destruction of the last minefield marks the end of a dark chapter in Nepal’s history, there is widespread concern that it is not the end of the story.

In 1996, Nepal’s Maoist party went underground and began waging war on the state, demanding the abolition of the monarchy and the drafting of a constitution by and for the people. After police forces failed to subdue the guerrillas, the government deployed the army, which then began to plant mines to protect their garrisons and vital installations like telecom towers, airports and power projects.

“The army planted 10,941 mines in 53 key areas,” said Army spokesman Brig. Gen. Ramindra Chhetri. The civil war ended in 2006 with the signing of a peace accord. “From October 2007, the army began to demolish the mines it had laid,” Chhetri said.

The accord pledged to demolish within 60 days all mines as well as improvised explosive devices (IEDs). But it took the turbulent republic – wracked by political instability and a succession of governments – five years to accomplish part of the task.

In 2007, the UN sent a monitoring agency to Nepal to watch over the army as well as the Maoist People’s Liberation Army (PLA). The government asked the UN body for help in destroying the mines and IEDs.

“Besides the mines, the army also planted IEDs in more than 275 areas while the PLA had more than 52,000 IEDs in its arsenal,” said Shaligram Sharma, undersecretary for peace and reconstruction. “The PLA handed over its stock to the UN which destroyed them, while the army cleaned up 170 areas.”

Nepal needed over eight million dollars to train the army to de-mine the conflict areas, with the British and Danish governments providing the bulk of financial assistance.

Since the civil war ended, 473 casualties, including 78 deaths, have been reported. More than half the victims were children aged between eight and 14 years. Women, especially those venturing into forested areas to collect fodder and firewood, formed the second-largest group.

Victims have complained of bureaucratic red tape preventing them from claiming compensation, although an assistance plan for the injured and the families of those killed is supposed to be in place.

“The procedure is long and unfriendly,” said Chitrakar. “The victims have to submit all bills to the chief district officer and then chase them through two ministries. From remote villages they have to trudge to four-storey offices in the capital where there are no lifts to assist people without a leg, arm or eye. People sell their livestock and assets to see them through hospitals but often receive only a fraction of what they spent.”

The Bandarmude bus explosion is a case in point. In 2005, when the Maoist rebellion was at its peak, the guerrillas blasted a public bus in the picturesque southern district of Chitwan frequented by tourists. While 38 people were killed on the spot, one more died in hospital and over 70 were injured. One survivor reportedly committed suicide while another went insane.

It was the worst attack in the course of the decade-old conflict, yet none of the victims received any compensation.

There is also the threat of explosive remnants of war. “While the army kept records of the mines and IEDs they used, the Maoists haven’t,” says Sharma. Some PLA fighters who knew where the mines were planted have either died or fled the country, leaving hidden bombs that unwary civilians or even stray animals could detonate.

With new rebel groups mushrooming, the government is calling for dialogue, while anti-mine activists like Chitrakar and the UN are urging Nepal to sign the Ottawa Treaty that bans the use of mines.

“I urge the government to remember the victims of explosions these past few years and agree on two words: never again,” says Robert Piper, the UN’s resident coordinator in Nepal. “While we are celebrating the clearance of all minefields in the country, it would be fitting (for Nepal to sign) the Ottawa Land Mine Treaty, becoming the 157th country to commit to the prohibition of the use, stockpiling, production and transfer of anti-personnel mines and their destruction.” 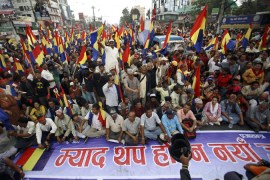 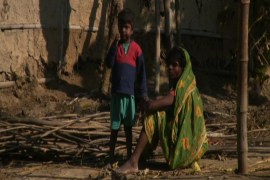 Slow land reform frustrates Nepal’s poor in a region where access to land linked to prosperity. 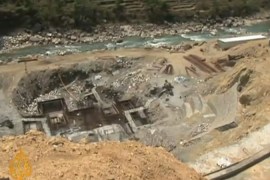