Vince Cable, the British business minister, has been stripped of power over the media sector after he was secretly taped “declaring war” on Rupert Murdoch, the chief executive of News Corp, the global mega multimedia organisation.

David Cameron, the prime minister, regarded Cable’s comments as “unacceptable and inappropriate”, his office said in a statement which reprimanded Cable and curtailed his influence.

The Department for Culture, Media and Sport, led by Jeremy Hunt, a Conservative, will take charge of media regulation including News Corp’s bid to take full control of pay TV operator BSkyB.

News Corp wants to buy the 61 per cent of BSkyB it does not already own for $12.2 bn to consolidate the business it helped build.

The European Commission on Tuesday granted unconditional approval for the bid, putting the ball back in Britain’s court.

Political analysts said the removal of Cable from the equation would reduce the chances of it being blocked.

Hunt has in the past praised Murdoch’s role in developing Britain’s television news market.

Cable, 67, is one of the best known members of the Liberal Democrats, the junior partner in the Conservative-led government which took office in May, the country’s first coalition government since World War Two.

His pivotal role in the party and the desire not to disrupt the coalition saved his skin.

“The coalition needs a Vince Cable, first of all to keep the Lib Dems on board, he’s the man who can communicate with them far more than (party leader) Nick Clegg,” Steven Fielding, director of Nottingham University’s Centre for British Politics, said.

Opposition Labour called Cable a “lame duck” and his diminished role could limit his ability to rein in on bank bonuses, an issue on which he has been outspoken.

In comments originally made to two undercover reporters from the Daily Telegraph newspaper and obtained by the BBC, Cable said: “I have declared war on Mr Murdoch and I think we are going to win”.

Murdoch, an Australian-born US citizen, is one of the best known media figures in Britain. He was a strong supporter of Margaret Thatcher, the Conservative prime minister in the 1980s, and broke the power of the unions in the print industry.

“News Corporation is shocked and dismayed at the reports of Mr Cable’s comments. They raise serious questions about fairness and due process,” it said in a statement.

Cable apologised for his comments.

“I fully accept the decision of the prime minister and deputy prime minister. I deeply regret the comments I made and apologise for the embarrassment that I have caused the government,” he said in a statement.

The British communications regulator Ofcom is examining the BSkyB deal to see if it would give News Corp too much control of the media in Britain, with the focus on content types, audiences, media platforms, control of media enterprises and future developments in the media landscape.

Analysts said a more dispassionate approach would reduce the chances of the bid being blocked.

“It means that the issues are more likely to be looked at in an evidence-based and factual way rather than being dealt with by a minister who has already determined the outcome he wants,” Steve Hewlett, a media consultant, said.

“It’s now fair to say not that the deal will go through but that the scrutiny will be of a different character.” 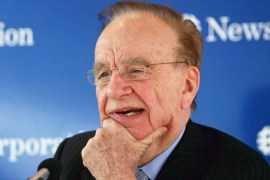 The CEO of News Corp, one of the world’s biggest media companies, built a global news and entertainment empire.