While there is a chance that Iran will meet with six major powers in Turkey to discuss its controversial nuclear programme, the sanctions against the country will not be off the table any time soon.

And the efficacy of the sanctions rest primarily in how well they succeed in economically isolating Iran – if the fiscal pain imposed by those sanctions is enough to alter the course of its actions.

Sanctions, of course, are the diplomatic alternative to military action, the preferred option of neocons and Israel. But will the ones against Iran have the desired effect? Or, as is often the case with Iran, will exemptions and back-door deals make the sanctions – which Iran has endured since its 1979 Islamic revolution – a moot point?

The country has been hit with new rounds from the UN, US, Canada, South Korea, Japan and the EU that cover multiple fronts, from nuclear enrichment materials to pistachios. Among other restrictions, the EU sanctions, which became law on October 27, aim to block oil and gas investment in Iran, as well as placing limitations on Iran’s oil refinement capability.

Even though the sanctions are far from airtight, they have serious potential ramifications for Iran, which is OPEC’s second-largest oil exporting country after Saudi Arabia (and fifth overall).

Despite the unlikelihood of it being true, Mahdi Ghazanfari, Iran’s commerce minister, said that sanctions imposed on the country have been “ineffective”, adding that they “have not affected our trade with other countries so far”.

Mahmoud Ahmadinejad, the Iranian president, has also brushed off the sanctions with a trademark shrug. On his presidential website, he recently stated that the sanctions against Iran are “the most ridiculous political decision” and said that despite them, Iran’s foreign currency reserves exceed $100bn.

Thus far, the only sign from Iran that the sanctions are beginning to pinch came via Mohammad Nahavandian, the president of the Iranian chamber of commerce, who recently said that the cost of imported goods had risen by 15 to 30 per cent.

When the UN voted in the fourth round of sanctions against Iran in June, Hillary Clinton, the US secretary of state, said that they sent a “message to the entire Iranian leadership”, encouraging it to “participate and work” with the UN on its uranium enrichment issues.

But the stated purpose of the sanctions – Iran’s nuclear activities – seems an uncertain goal.

What will surely be achieved, despite the loopholes and persistent interest from countries such as South Korea, China and Turkey, is a decrease in foreign investment in Iran. And that, according to Djavad Salehi-Isfahani, a professor of economics at Virginia Polytechnic Institute and State University, will hardly be helpful to US interests.

“Private investment is the only way Iran’s economy can grow,” said Salehi-Isfahani.

The sanctions, he says, affect investment in Iran, thereby preventing Iran from recovering from the current recession. The US is risking losing the “bigger game” in Iran – by “alienating Iran’s youth, perhaps the only demographic group in the Middle East that has shown a keen interest in globalisation and looks up to the West as its source of future prosperity”.

He says the US is about to make the same mistake it made with Cuba 60 years ago, boycotting and isolating it in the hope of forcing regime change. But that, he argues, will not work with the Iranian government, which is somewhat isolationist to start with.

“It’s not like Ahmadinejad is searching to get into the World Trade Organisation (WTO),” said Salehi-Isfahani. What the sanctions and lack of foreign investment in Iran are likely to do is to plunge Iran’s young powerful demographic into a chaotic system with “malfunctioning basic services”.

“Now, if you have 10 to 15 years of sanctions and misery … and with enough terrorists in the region, I don’t think it is science fiction to say that Iran’s youth could be radicalised,” said Salehi-Isfahani, adding that instability in Iran could adversely affect Afghanistan and Iraq.

It is important to note that these lost foreign investments are not just centred on the energy industry. On October 22, Iran’s state television reported that the country had more than doubled its exports to the US between April and September to $77mn. Iran’s exports to the US typically include caviar, carpets and pistachios. The evaporation of that revenue will represent a significant loss to local industries.

Even though Robert Gates, the US secretary of defence, said in September that sanctions against Iran “have ended up being more effective and more severe than perhaps we might have expected,” the fact remains that so far, there is little sign of change in the direction of Iran’s nuclear programme.

A recent US congressional report stated that while Iran’s economy is being harmed “to the point where domestic pressure could build on Iranian leaders to accept a nuclear compromise, there is a consensus that US and UN sanctions have not, to date, caused a demonstrable shift in Iran’s commitment to its nuclear programme – the key strategic objective of the sanctions”.

Ian Anthony, the programme director of the Stockholm International Peace Research Institute’s arms control and non-proliferation programme said, via an e-mailed interview that it is too soon to tell how sanctions can work to curb weapons amassment.

“The use of targeted sanctions by the international community as a preventive non-proliferation measure is new and we have little experience to call on in evaluating the probability of success,” said Anthony, who is unsure of the exact nature of Iran’s nuclear programme. He also said it was unlikely that Iran will change its policy.

“Iran does not seem to lack the financing needed to buy items for its nuclear programme and the individuals and entities under sanctions had sufficient notice to make alternative arrangements. The sanctions will probably make life more difficult for the general economy and impede legitimate economic cooperation but the Iranian government will probably be able to shield the nuclear programme.”

Taking into account the scope and increasingly tough nature of these multiple rounds of sanctions, it seems unlikely that the average, work-a-day Iranian will not take the brunt of these restrictions, while the government, which is the intended target of the sanctions, has already taken advantage of loopholes.

Shortly after US sanctions went into effect, the Washington Post reported that several Chinese companies had found ways to work around them, helping Iran develop its nuclear technology. And where sanctions prevent direct trade, the Iranian government has enlisted private companies as fronts, used offshore offices to do business and the paperless havaleh method of transferring funds.

Despite the US rebuffing pressure from Binyamin Netanyahu, the Israeli prime minister, to impose “crippling sanctions” on Iran, it seems possible that things could get tougher for Iran.

An unnamed senior US official told The Associated Press that if Iran did not agree to ship out a substantial amount of low-enriched uranium to be turned into fuel for a research reactor that the UN might “go for the jugular” with even tougher sanctions.

Kimberly Ann Elliott, a sanctions expert and senior researcher at the Center for Global Development, said that while we could see tighter implementation of the current sanctions, barring a precipitating event, additional UN sanctions would be surprising at this point.

Implementation of the current sanctions, which Elliott sees as being rather effective as far as the financial and banking restrictions go, is tricky in part because they can be interpreted broadly, as done by the EU, or narrowly, as done by China.

“There’s enough wiggle room so that they [Chinese businesses] can still be in compliance with the sanctions while still continuing to do business with Iran,” said Elliott.

In the case of Iran, the sanctions are rather wide sweeping, the relationship between the US and Iran has been sour for decades and, Elliott points out, “the cost of defiance has to be greater than the cost of compliance”.

It seems unlikely that Iran would allow the US to guard its nuclear facilities – as it does in Pakistan. And as long as countries bordering it on the east and west are occupied by the US, it seems security concerns will remain.

If nuclear weapons are deemed necessary to national security or stability, then there is nothing that can dissuade Iran from pursuing them (if, indeed, that is the case). The only hope would be if the sanctions were part of a broader strategy that would take into account Iran’s security concerns.

So, how optimistic can we be about the prospects of the sanctions curbing Iran’s nuclear programme?

“It’s not impossible that a bargain might be possible,” said Elliott, chuckling at how cautiously she had to couch any optimistic outcome.

The question remains: Are those odds enough to risk damaging Iran – and stability in the region – in the long run? 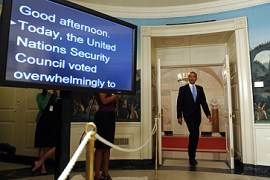 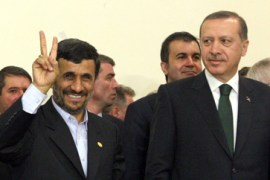 The tragicomedy of Iran sanctions