From his farm house in northern Canada, Tim Ewert has watched hundreds of elite security forces hunt the bomber responsible for attacking six gas installations in the past two years.

Then, he says, he watched most of Canada’s famed mounted police pack up and head home without catching their man.

Canada is the largest foreign supplier of oil to the US, so the repercussions from attacks have been felt in the boardrooms of Houston and the halls of power in Washington and Ottawa, far away from the rolling hills of northeastern British Columbia province.

The sabotage campaign led EnCana, North America’s largest extractor of natural gas and the exclusive target of the attacks, to offer a $1mn reward for information leading to the saboteur’s conviction. It is reportedly tied for the largest award ever offered in Canadian history. The stakes are high.

The first attack hit a gas pipeline in October 2008, days after local media and corporate officials received threatening, hand-written letters demanding that EnCana “close down operations [and stop] endangering our families with crazy expansion of deadly gas wells in our homelands”.

No one has been charged over the bombings, which police say constitute “domestic terrorism”.

But through a series of interviews with people in the affected areas, Al Jazeera has learned that security forces have all-but-given-up on their hunt for the bomber.

“It all happened very suddenly,” said Ewert, who lives in the small community of Tomslake at the epicentre of the sabotage campaign. “Police pulled off our road and removed the cameras.”

“It is a little odd how this thing has gone from a heightened state of emergency to ‘no problem at all’,” says the organic farmer, who police once considered a suspect in the bombings because he complained about pollution and safety violations committed by the gas industry.

While security forces maintain that they have not closed the case, Sgt. Darren Traichevich, a spokesman for the Royal Canadian Mounted Police in Dawson Creek, admits they have “scaled back patrols in the area”.

He would not comment on the removal of security cameras or “what was taken down – if anything”.

This is a marked change from 2009 when an estimated 250 elite officers from Canada’s Integrated National Security Enforcement Team [INSET], including a sniper who was apparently flown back from Afghanistan to help with the operation, scoured the back-roads around Tomslake and Pouce Coupe in northeastern British Columbia province, searching for the saboteur.

Traichevich says police are now “passing information on to INSET in Vancouver” – a 16 hour drive from the crime scene INSET is supposed to be investigating.

John Thompson, a security analyst with the right-wing Mackenzie Institute think-tank, says he is not sure if moving the national investigation team to Vancouver is “the best decision,” although he acknowledges that “keeping field work going is expensive”.

But in rural gas stations, dinners and coffee shops, there are rumours about something more conspiratorial than shifting budgetary priorities.

“A lot of people around here are subscribing to the theory that it [sabotage] was a corporate and police thing and there was never a local person involved,” Ewert says. “People believe the whole thing was orchestrated.”

While the rumours may seem outlandish, they are not without precedent; a similar sabotage situation unfolded in neighbouring Alberta province during the late 1990s.

In 2000, a court convicted Wiebo Ludwig, an evangelical preacher for launching attacks against the Alberta Energy Company [AEC].

Ludwig blames oil industry toxins,  specifically deadly hydrogen sulfide, or sour gas, for causing his wife to miscarry one of their children.

Court documents show that police themselves bombed one of the AEC sites, in Operation Kabriole, as a ploy to gain credibility for an informant.

Police arrested Ludwig in January 2010, in connection with the latest round of bombings in British Columbia, but he was released without charge after a lengthy interrogation.

Locals residents say police began scaling back their operation and removing cameras after Ludwig’s release, perhaps because INSET operatives were being sent to Vancouver to police the 2010 Winter Olympics.

While Ludwig and co-conspirator Richard Boonstra caused millions of dollars worth of property damage in the 1990s, police participation in sabotage did not win them respect in local communities.

“Any conspiracy theories circulating are reflective of a distrustful relationship between the local population and the police,” says Paul Joosse, a sociologist at the University of Alberta who studies radical environmental movements.

According to police files which came out during Ludwig’s trial, AEC helped directly plan the attack, with company officials meeting police officers.

In 2002, AEC merged with PanCanadian to form EnCana – the firm which has been the exclusive target of the recent attacks in British Columbia.

Traichevich says the RCMP has “learned a few lessons” since it blew-up infrastructure in Alberta, but refused to comment further on the AEC debacle or the fear and mistrust it caused in rural communities.

A climate of fear, however, is not all bad for oil exporters.

Internal documents from Canadian security forces marked “confidential” obtained by Al Jazeera through an Access to Information request, show that Canada’s western provinces, Alberta and British Columbia, both of which are petroleum exporters, could benefit from a “market psychology of fear” and “geopolitical premium on oil prices” which increases energy revenues when threats against the industry are made by “terrorists”.

While al-Qaeda directly threatened Canada’s oil industry in a 2007 article in Voice of Jihad magazine, security forces believe the attacks in British Columbia are related to grievances from people living in the area.

“The Western Canadian oil industry [two lines blanked out] encounters many opponents. Pollution, the use of lands owned or claimed by native communities, [and] the employment of people living in the area … are examples of the issues that create tension,” say government documents obtained by Al Jazeera.

Stephen Harper, Canada’s Conservative prime minister and the son of an accountant with Imperial Oil, hails from the country’s western petroleum exporting heartland.

And, while most local residents deplore the attacks, some sympathise with the bomber’s critiques of the industry’s environmental failings and say that Harper’s drive to turn Canada into an “energy super power” has led to a lax approach to resource management.

“The biggest worry where I live would be water use [from the petroleum industry],” says Gwen Johansson, a municipal councilor in Hudson’s Hope in northern British Columbia.

An October 2010 study from the University of Toronto says that Canada’s gas boom could be threatened by a lack of water, and government regulators have not “raised any substantive questions about [shale gas’] impact on water resources”.

Johansson says federal and provincial governments “abdicate responsibility … because revenue [royalty dollars and campaign contributions] comes from the oil and gas industry. The government pays more attention to them than other sectors”.

Throughout their investigations into the bombings, police and corporate officials repeatedly stated that the saboteur was jeopardising public safety.

But protecting the public is not the authorities’ main concern, Ewert says. “Last November, a gas well near our house corroded and exploded, releasing deadly sour gas into the air.”

“Supposedly the police and EnCana were on high alert, but it took EnCana two hours to respond,” to a safety breach which released far more gas than all six bombings combined.

“It took the police an hour to send one car,” Ewert says, adding that local residents, who believe security forces played a role in the bombings, took the slow response to mean officials knew the leak was not caused by a saboteur.

Residents had to organise an evacuation on their own, after a farmer drove through a cloud of poison gas.

EnCana apologised for the incident stating that “clearly, procedures were not followed”. But no one was charged over the accident which was more dangerous to the public than so-called acts of terrorism.

In mid-October 2010, police announced that they had discovered DNA on a letter sent by someone claiming to be the bomber, although Traichevich refused to comment any further on this latest development in the long running case.

Despite some renewed publicity, rumours of a police cover-up and corporate complicity still abound in the rural north. And, more importantly, residents say many of their larger concerns about the industry’s environmental impact have not been addressed. 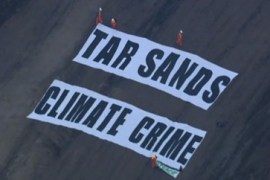 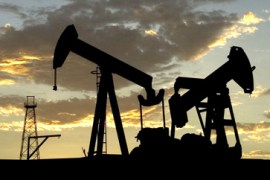 Ottawa fears the US president-elect could adopt policies that hurt its oil industry.