Thousands of students have attended a rally in central London against a proposed rise in university tuition fees.

Between 30,000 and 50,000 people were reported to have attended the march on Wednesday, which also saw scenes of violence as some protesters attempted to force their way into the headquarters of the ruling Conservative Party.

At the heart of many of the students’ anger is the breaking of a pre-election promise made by the Liberal Democrats, who formed a coalition government with the Conservatives in May, who had said they would oppose any rise in tuition fees.

The demonstration has also raised the question as to whether the UK, which has witnessed relatively little in the way of protests against recent austerity measures, is about to experience wider action against the government.

The National Union of Students (NUS) has said it will try to recall legislators from the Liberal Democrats currently in parliament who vote in favour of the fee increase.

Tony Travers, a political analyst and academic at the London School of Economics, told Al Jazeera the protesters were attempting to target Liberal Democrat MPs, who have traditionally fought for improved welfare, as opposed to Conservatives, their centre-right coalition partners.

“I can see that they are trying to target Liberal Democrat MPs so that they may go against the changes when it comes to enacting them,” Travers said.

“But there are enough Liberal Democrat MPs that will go with them for the changes to be put into effect.”

On Thursday, Nick Clegg, deputy prime minister and leader of the Liberal Democrats, admitted he “should have been more careful” when he signed the pre-election pledge to oppose any rise in tuition fees.

He was singled out for strong personal criticism for his reversal in policy during the march, with hundreds of students chanting his name in anger.

Clegg says when his party, who traditionally poll well among students, made the pledge before the election it had not realised just how bad the country’s economic situation was.

A total of 14 people, including seven police officers, were injured in Wednesday’s protests.

Nick Herbert, the police minister, blamed the violence on a “hardcore” minority, while their have been claims that anarchist groups were mainly behind the events.

The NUS, who organised the demonstration along with the UCU (the lecturers’ union), said they deplored the violence, although some Conservative supporters asserted that the opposite was true.

However, he also condemned those protesters that entered his party’s HQ, stating that that they must be punished.

Fifty-one people were arrested due to the unrest.

The coalition government is aiming to slash $128bn from runaway public expenditure over the next four years and Travers said that the protests were unlikely to stop the government’s deficit-cutting zeal.

“I would be surprised if they changed anything,” Travers said. “But then again nothing is certain in politics.”

Tuition fees are set to rise from the current level of about $5,000 to up to $14,000 annually for undergraduates, while at the same time university budgets are to be slashed by 40 per cent.

This has left many students and potential students asking why they should pay more if they get less funding and resources in return.

Humanities and arts are likely to be hit hardest, lacking the protection that other disciplines such as science and medicine, will receive.

Fears have thus been stoked that only the rich will be able to access more expensive courses.

The Conservative-Liberal Democrat coalition government has said that the current system of taxing to pay for tertiary education is elitist, while scholarships will pick up the shortfall of poorer students’ entering universities once the fees change.

The government has said it is increasing tuition fees to stave off a worsening budget deficit, with, they say, more than half of young people in the population expected to go to university in the next few years.

The previous Labour government introduced the first fees for students soon after it was elected in 1997, while Scotland abolished tuition fees in 2000.

Whether or not Wednesday’s protest is the beginning of greater activism against large and wide-ranging public sector cuts, the most severe drop in spending since the Second World War, remains to be seen.

Before Wednesday’s protests there had been little public display of opposition to the measures that will see tax hikes, reductions in welfare payments, and layoffs in the public sector.

This is in stark comparison to France, where strikes and demonstrations against austerity measures have caused fuel shortages and the halting of public services.

Travers said: “Student dissent is not new in this country or elsewhere. And in some ways the demonstration yesterday [Wednesday] highlights the strongly muted or lack of response so far from the rest of the UK public sector.

“I’m not saying that there won’t be further protests but … this is not France.” 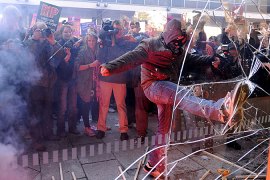