One of Iraq’s members of parliament spends her time doing charity work. Another has been busy writing his master’s thesis. Dozens of others have spent the past eight months vacationing overseas.

“I’ve been using this time to write my master’s thesis on comparative literature … I hope I don’t complete both my master’s and my PhD while parliament is still not in session,” said legislator Hakim Al Zamily of the Al Ahrar bloc loyal to populist Shia cleric Muqtada Al Sadr.

Since Iraq’s inconclusive March 7 elections, the 325-member parliament has met only once – and for less than 20 minutes. It has remained in an ambiguous “open session” indefinitely, an attempt to give politicians the opportunity to agree on a unity government.

Not one of the blocs that won seats in the elections secured an outright majority to form a government on its own – a stalemate that has been exacerbated by an acute rivalry between former prime minister Iyad Allawi, whose Iraqiya list won 91 seats, and incumbent premier Nouri al-Maliki whose State of Law Coalition came second with 89 seats.

Caught in the middle have been the country’s elected representatives, who’ve been doing all but actually govern.

Al Zamily, who previously served as a deputy for the minister of health said he ran for elections with a genuine interest in bringing about change, namely “fighting rampant corruption … a plague that’s seen Iraq now ranked the third corrupt country in the world.”

“But I’ve been incapable of doing anything. Needy constituents come to me all the time asking for services, jobs, and other things. But I am unable to help them, I feel incapacitated,” he said as he sipped tea in an empty office set up to meet constituents.

Wahida Al Jumeily of Allawi’s Iraqiya list was previously elected to Baghdad’s Provincial Council. Looking for broader powers to provide services, namely in health and education, she ran in the parliamentary elections.

“Our main duty as MP’s is to legislate and monitor the performance of the government,” she said. “But until now, I haven’t been able to do my job … I’m frustrated and I fear, we, as parliament, are going to fail.”

Al Jumeily said she has stopped attending informal talks at the parliament building “because we go there, people talk, and they never agree on anything. It’s a waste of time”.

Instead, she’s been dishing out from her own salary (and earnings as a successful businesswoman) to do charity work, including distributing stationary to needy students and encouraging women to attend literacy classes – a welcome effort in a nation where legislators have been accused of wasting public funds by amassing exuberant salaries despite their inaction.

Simply put, in Iraq, MP’s are financially privileged, with perks and bonuses that put them ahead of even members of the US Congress.

Iraqi politicians make about $11,000 a month. In addition, they get a monthly allowance of more than $12,000 for housing and security, pay only six per cent of their base salary in taxes, and have already collected a non-refundable stipend of $90,000 after they were sworn in, in June.

By contrast, an average Iraqi civil servant gets paid around $600 a month, and estimates indicate that at least one in four Iraqis live below the poverty line.

The divide has prompted lawsuits and protests.

More than a dozen non-governmental organisations came together and formed The Civil Initiative to Preserve the Constitution.

They have held protests in Baghdad’s popular intersections, demanding parliament resume its sessions. In a recent gathering in Tahrir Square, they staged a play mocking Iraq’s politicians.

It featured a poor, old man unable to sit on a chair as three other people scramble for it – ultimately one manages to sit and stomps his feet on the others.

The activists have already recorded a success in their battle.

Last month, Iraq’s highest court ordered Parliament to meet, saying the delay in its sessions is unconstitutional. The decision came after these civil society groups had filed a lawsuit against acting Parliament speaker, Fouad Massoum.

“We are not after political gains,” said Waleed Al Mashhadani of Al Farqadein NGO for relief and development.

“This is at the heart of our role as civil society members. The delay in government formation has meant a hiring freeze. There are no jobs, no services, nothing.”

Following the high court’s verdict and stepped-up pressure in the wake of bloody attacks that gripped the country in recent weeks, Massoum announced parliament will meet on November 11 to elect a speaker.

But the necessary prerequisites to guarantee the success of that session are far from achieved.

In recent days, the leaders of Iraq’s main political blocs have been holding a series of face-to-face meetings – for the first time since the March elections – to discuss power sharing, but with little success so far.

The blocs are clinging on to their demands: The Kurds want the presidency, the Shia alliance is backing Maliki for a second term, and Iraqiya wants constitutional amendments to curtail the influence of the prime minister, whom they accuse of monopolising and consolidating power.

It’s not only a grim sign that the deadlock is going to last, but it could also mean that parliament may not be able to meet, and that parliamentarians will continue to exhaust the nation’s already fragile budget for nothing in return.

During the previous parliament session, a group of MP’s tried more than once to pass a law to cut legislators’ salaries.

But they faced overwhelming resistance, and in some cases, even threats against their lives. Some have insisted the proposed bill must be a priority for this session if and when parliament meets.

“They’re now saying some 50 MPs will be performing (the annual Muslim pilgrimage of) Hajj in Saudi Arabia on the government’s expense,” said activist Mohammed Saad of The Civil Initiative to Protect the Constitution at their latest protest in Baghdad’s Tahrir Square.

“Such lack of conscience! This is unacceptable. They’re doing that instead of compensating the widows and orphans who have been victimised by terrorist attacks!

“This waste of public money must come to an end.” 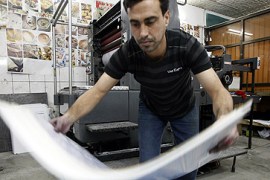 A review of events in the country’s political process since the US-led invasion in 2003.