China’s imperious behaviour in recent territorial spats with its edgy neighbours has touched a raw nerve. Anxiety about its intentions and the future outlook loom large as leaders of the 16-nation East Asia Summit gather this weekend in Hanoi, Vietnam’s capital, to discuss regional matters.

As tensions up north between Beijing and Tokyo show few signs of abating, many are voicing fears that China’s surpassing of Japan as the world’s second largest economy has put into fast forward its ambitions about fulfilling its dream of unification through reclaiming lost territories.

Some even say that the restoration of an international order where the Middle Kingdom gains supremacy in the region and beyond is on the agenda of the Chinese leadership.

An October article in the online edition of the US-based Foreign Policy magazine claimed that Beijing has abandoned its philosophy of a “peaceful rise”. It argues that China is harking back to a Sino-centric view of the world where it sits atop the political hierarchy and other sovereign states are seen as lesser entities in deference to the Middle Kingdom.

Disquiet about the revival of a Sino-centric mentality among the Chinese ruling elite has surfaced even in hardcore nationalistic media outlets like China’s Global Times newspaper.

“China’s success is the result of reform and opening up but success has not brought a more open mind. On the contrary, it has caused the return of a self-centred ideology,” said a signed opinion piece on October 11. “The cultures around China have, historically, worried about being engulfed by other powerful civilisations. Now they feel uncomfortable with …China’s over- emphasis on its own civilisation,” it said.

In September, the same paper emphatically stated that China’s claims over the disputed Senkaku/Diaoyu islands are part of a broader claim to the Okinawa prefecture, which it said Japan snatched from the Qing dynasty that ruled China in the early 19th century.

When disputes over the rocky isles claimed by both China and Japan boiled over in September, Beijing cancelled diplomatic meetings with Tokyo, cut off the export of rare earth materials upon which Japan depends, and demanded an apology after Tokyo gave in to its demands and released the detained crew of a Chinese fishing trawler.

Beijing also reacted with fury to comments by the Japanese foreign minister describing its retaliatory action as “hysterical”.

Beijing’s anger was palpable too when China’s growing assertiveness over the disputed territories in the South China Sea was countered earlier this year by the United States with arguments about the area being “maritime commons”.

At a July security meeting of Association of South-East Asian Nations (ASEAN) countries, US Secretary of State Hillary Clinton stressed the importance that the United States attaches to the freedom of navigation in the South China Sea, calling it a US “national interest”. In those busy international shipping lanes, there are islets like the Spratlys and the Paracels that are claimed in part or in full by not less than six countries.

Chinese Foreign Minister Yang Jiechi retorted that Beijing considers the South China Sea a “core national interest” and that “China is a big country and other countries are small countries and that is just a fact.”

In August, Beijing announced that it had dispatched a manned submarine beneath the South China Sea to plant the Chinese flag on the seabed and begin a search for valuable undersea mineral deposits. Not coincidentally, the Senkaku/Diaoyu islands in the Yellow Sea are believed to be sitting on underwater deposits of natural gas too.

China’s emphasis on sea rights is not new, having occurred under the rule of late economic reform architect Deng Xiaoping. Unlike Mao Zedong who waged wars with neighbouring countries on land, Deng stressed the importance of China’s sovereignty and sea rights.

As China’s economy continues to grow at staggering pace, straining the country’s resources and energy supplies, sea exploration and development is acquiring a new urgency.

In recent years, China has taken steps to strengthen its maritime defence, streamline its complicated system of sea management rights and build up a modern China Coast Guard parallel to those of the United States and Japan.

From Beijing’s point of view, the escalation of recent territorial disputes is entirely due to the United States’ high-profile “re-engagement” with the region. In September, US President Obama held a summit with leaders of the 10-member ASEAN and pledged that the United States will play a “leadership role in Asia”.

“Already Clinton’s declaration about the South China Sea as maritime commons was meant to announce the return of the United States to Asia,” says Liu Ming, Asia researcher with the Shanghai Academy of Social Sciences. “The US (government) wants to internationalise an issue that is meant to be resolved between China and relevant parties on bilateral basis. This is not a multilateral matter. Going the US way would make things in the South China sea only more complicated.”

Some are already warning that the re-emergence of the US factor in the region will rob ASEAN of the opportunity to speak with its own voice. The fifth East Asia Summit on October 30 is expected to invite the leaders of Russia and the United States to participate in it starting from 2011. But to Beijing, this welcome extended to “big powers” like the United States and Russia to the region’s decision-making table is a poorly thought out attempt to counterbalance the rise of China.

“The United States is trying to sow mistrust between China and ASEAN,” says Ma Ying of the Shanghai Institute for International Studies, cautioning that the region may become entangled in the battle for influence between the two superpowers. 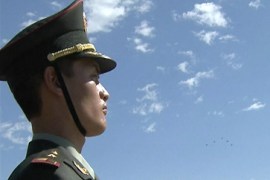 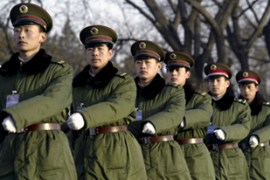 Further harm to relations foreseen if $6.4bn weapons package for Taiwan goes ahead. 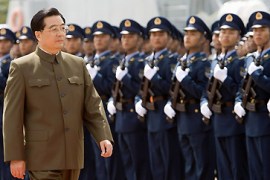 Armed forces to get new $800m uniforms as China upgrades its military.