Ngoun Thy shuffled through the darkened room. To the right, mortar shells, lined up in a row. To the left, a spool of aged wiring and a pile of metal.

“Anti-tank mines,” he said. The squat, rusting cylinders had been stacked up in a rough pile.

Ngoun, a senior instructor at Cambodia’s national training centre for demining operations in central Kampong Chhnang province, walked to the back of the hall. “Oh, these ones,” Ngoun said, crouching in a corner: “Bombies.”

He picked up two half-circles the size of tennis balls; the metal shells clinked harmlessly in his hands.

This quiet hall on the outskirts of the provincial capital in central Cambodia could be a showroom for the deadly legacies of war. It is filled with the relics of almost three decades of conflict in this South-east Asian nation — rusty mines laid by once violent factions; cluster submunitions – bombies – dropped in the millions as part of the US government’s secretive campaign over Cambodia in the early 1970s.

But for officials with the government’s demining operation, the Cambodian Mine Action Centre (CMAC), this room also represents hope. Each of the former weapons has been painstakingly unearthed, disarmed, then left here as a reminder.

Cambodia is one of the most contaminated countries in the world when it comes to land mines and unexploded ordnance (UXO). But with almost two decades of experience slowly cleaning away that legacy from contaminated rice fields and jungle brush across the country, Cambodian authorities have also become reluctant experts. They are now hoping to use that expertise to help other developing countries afflicted with similar problems.

Cambodian deminers have participated in peacekeeping operations as part of UN missions in countries like Sudan. Cambodia is also offering its experience at the strategy level. In September, a delegation from Colombia is expected to visit Cambodia as part of ongoing training.

Roath Kanith, CMAC’s director of training, research and development, compares the landmine situation in Colombia with what Cambodia faced a dozen years ago.

“Before 1998, Cambodia was partly secure, partly insecure,” Roath said. “If you conduct mine/UXO operations in an insecure area, what do you do? It’s the same thing in Colombia. Part of the country is secure, but part of the country is not under government control. So we can share the information we learned.”

Advocates see this kind of South-South partnership among developing countries as a way to reduce dependence on developed nations’ aid.

Roath, however, said such information exchanges make fiscal – and moral – sense. “Remember that Cambodia has received the support of the world community for almost 20 years. I think it’s time for Cambodia to pay back to the world,” he said. “Even if we don’t have the money to pay directly to mine operations, we can at least export our knowledge and experience.”

CMAC itself has grown from a small demining project in the early 1990s, as peace was being negotiated in Cambodia, to a national organisation with more than 2,300 deminers today.

As CMAC grew more independent, it also grew less reliant on foreign expertise. Roath said there were more than 100 foreign technical advisers at CMAC when he started working there 12 years ago. Now, he estimates, there are “two or three” throughout the entire organisation.

“In terms of training, in terms of mine/UXO clearance, we have the capability to handle all those issues,” he said.

Heng Ratana, CMAC’s director general and an advisor to the prime minister, said it makes sense for the country’s largest demining operation to be as independent as possible.

“We have had many short-term technical advisers in the past. They can speak very good English … but maybe not so sure about technical skills and experience in the field,” Heng said. “So I think promoting UXO-affected countries to share their experiences among themselves is very important.”

The significance of landmines and UXO in Cambodia cannot be overstated. Surveys have estimated that landmines affected almost half of the country’s villages. The mere threat that a stretch of land may be contaminated has rendered entire plots of arable land too dangerous to farm. Indeed, landmines are seen as such a barrier standing in the way of the country’s development that Cambodia has included mine eradication as one of the specific targets under its Millennium Development Goals aimed at ending poverty.

“Most of the affected communities are living in rural areas. These are people who are living under the poverty line,” Heng said. “People need to use safe land. So it is our obligation to provide them with that safe land for generations to come.” But although Cambodian authorities now lead demining efforts in their own country, they are still reliant on donors to fund these operations.

Government officials and those with demining NGOs have complained of “donor fatigue” – fluctuations in year-to-year funding that may threaten future plans, as well as Cambodia’s recently revised goal to clear severely contaminated areas within the next 10 years.

“The funding situation is fluctuating at this stage,” Heng said. “Projects are on and off. There are gaps for a few months. It makes it very difficult for mine clearance in this country.” 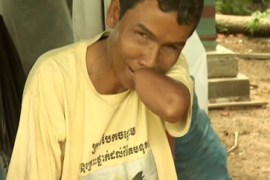 Cambodia in clasp of cluster bombs

Bombs dropped during Vietnam War still maim, but government refuses to sign treaty to clear them. 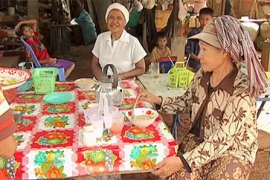 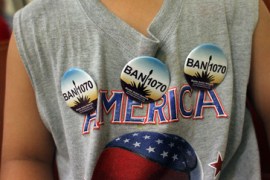 From globalisation to migration 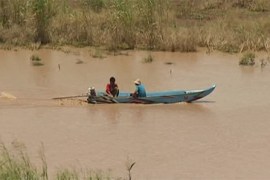