Alma Guillermoprieto was one of only two journalists to investigate rumours of the notorious massacre in El Mozote, El Salvador in December 1981. Because the slaughter of 1,000 unarmed civilians was perpetrated by the US-backed Salvadorian Army, the Ronald Reagan administration attempted to discredit her work.

But Guillermoprieto refused to back down, and finally the US government was forced to confirm her story.

On Tuesday, Guillermoprieto – along with three other extraordinary women – was honoured for her work at the 2010 Courage in Journalism Awards at the Waldorf Astoria hotel in New York.

Organised by the International Women’s Media Foundation (IWMF), the awards pay homage to intrepid women across the world who continue to penetrate press barriers in order to report from the frontlines of their countries and communities.

This year’s ceremony coincided with the 20th anniversary of IWMF, and was as much a celebration of the group’s two decades of groundbreaking work in women’s media freedom as it was a tribute to the recipients.

“This [awards ceremony] is a tremendous cure for the loneliness of our craft,” Guillermoprieto said as she accepted the Lifetime Achievement Award for decades of fearless reporting, adding that this kind of recognition was a salve to the lesions caused by ignorance and censorship.

The other three winners had equally compelling, inspiring tales to tell. Claudia Duque, a Colombian journalist whose reporting has run the gamut from child trafficking to illegal adoption to human rights violations committed by state paramilitaries, could not hold back her tears as she accepted her award, so touched was she by the presence of her heroic colleagues.

Since Duque exposed Colombia’s secret police, the Administrative Department of Security (DAS), for tampering with evidence in the murder of political journalist Jaime Garzon, she has been kidnapped on multiple occasions, robbed, and issued countless death threats. But what is most vile about Duque’s predators is their continuous threat to torture, rape and murder her 10-year-old daughter.

“The government intercepted my emails,” Duque said. “In one of them I had told my friend that I was worried about my daughter because she is my weak point. One month later she was threatened.”

Undeterred by the terror campaign, Duque continues to write. “This award is dedicated to my daughter,” she said, “who has been at my side despite all the bad moments we have lived. Darling, you are the bravest one, this award is yours.”

Vicky Ntetema, a Tanzanian journalist who has been reporting for the BBC since 1991, stressed that the gravest task of journalism is to be a voice for the voiceless, to “write about the people, for the people”.

When Ntetema began to investigate rumours of an odious blackmarket in Tanzania that bought and sold the body parts of mutilated albinos, she single-handedly uncovered a story of genocide that has put her in critical danger.

In 2007, Ntetema heard that four albino Tanzanians had been brutally murdered by witchdoctors who used their arms, legs and hair in potions supposed to bring good fortune. Posing as a customer, Ntetema gained access to the repugnant inner workings of the industry, but was exposed when her recording device fell out of her pocket.

Since then, despite countless death threats, Ntetema has continued to shed light on the practices of the witchdoctors who hold tremendous political power in traditional African society. “Eighty percent of Tanzanians survive on a dollar a day,” Ntetema said. “And these potions go for a thousand US dollars a pat. The demand comes from the rich.”

Ntetema’s expose brought her into the thick of the albino community and she is now as much an advocate as she is a reporter. She currently serves as the executive director of media and international affairs for the Canadian advocacy organization Under The Same Sun (UTSS), which exists to promote the welfare and well-being of marginalized and disadvantaged people.

“The reason why I am no longer reporting fulltime for the BBC is because I have crossed a line,” Ntetema said, “and we can’t have that in journalism. As an advocate of Persons With Albinism (PWA), it’s going to be difficult for me to not be one-sided.”

Ntetema recognised organisations like IWMF as essential for the survival and proliferation of the international community of women journalists. “Women are discriminated against in any field and journalism is no exception,” Ntetema said. “It’s a man’s world out there.”

Sadly, Tsering Woeser, a Beijing-based Tibetan freelance writer and blogger, could not attend the awards due to the confiscation of her passport by the Chinese government. In a pre-recorded acceptance speech, she stressed the importance of new media in circumventing the great ‘Firewall’ in China. She referred to herself as a “media machine, a weapon for the powerless against the power of the world, a weapon of non-violence and non-cooperation.”

Guillermoprieto ended the ceremony by calling attention to the border city Reynosa in Mexico, where the Gulf criminal group controls the government, the police, street vendors and media, according to the Committee to Protect Journalists.

Referring to CPJ’s recent September report, Guillermoprieto described the situation in Reynosa as a “social experiment on the absolute absence of news reporting”.

What this ‘experiment’ proves is that a world devoid of the press is lawless, macabre and bleak, she said. Without it there can be no democracy, no freedom and certainly no hope for a more promising tomorrow. 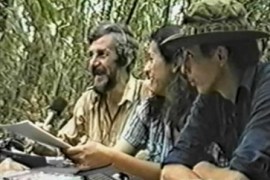 Left-wing activists take to the airwaves to promote message of change. 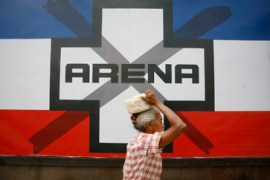 Video: Salvador looks to the left