Hassan Khan has stars in his eyes.

“I never thought there would be an opportunity for a British Asian to really break through into the Bollywood market… I thought it would be in India.

Khan is one of eight pupils all recently enrolled in the Actor Prepares London acting school, run by Bollywood star Anupam Kher.

Kher, who has played roles in hit films like Bend it like Beckham and Bride and Prejudice, opened the school, which is a spin-off from the prestigious Actor Prepares academy in Mumbai, on Thursday.

Auditions for the school’s selected places were held over the summer, with a panel of judges that included Kher and Tannishtha Chatterjee, who played the lead role in the film Brick Lane.

“The auditions were quite daunting,” Khan said. “I had to prepare an English monologue and a Hindi monologue.

“But I love all the clichés about Bollywood. The melodrama, the heavy emotions… You get everything – emotion, drama, tragedy – it is a formula I was brought up on. I love the colour and the actors have style. I am drawn to that over Hollywood stars.”

In his welcome speech on the school’s opening day  on Thursday, Kher, 54, said: “I have reasons to be proud as an actor. But this is my most proud moment.

“I am from a small town in India from the hills of the Himalayas. I dreamt of being an actor but I never dreamt of having an acting school in London.”

Kher told Al Jazeera he chose the UK because of the nation’s increasing love affair with all things Bollywood.

“Ten years back we were not prepared to have a drama school. There is a misconception there that anyone can act – acting can’t be taught.

“After establishing the school for three years in Bombay it did well and it was obvious to have an international branch of the school because London is the cultural capital of the world.”

Not all of the students at the school are British. Anu Singh, 20, flew to London from her hometown in California after she found out she had been selected.

“I’ve come here for the basic training and for the general respect that comes with Anupam Kher’s name,” she said.

“My end goal is to become an actress for the Bollywood film industry. I’ve grown up on Indian films…I love the dance aspect of it and how it reflects our culture.”

Pirah Palijo, another student who came ollywood comes to Britainfrom Pakistan for the course, said she did not expect non-Indian actors to be treated any differently in the industry from those who grew up in the country.

“Even if we live outside India we maintain the same beliefs,” Palijo said.

“I speak Hindi and Punjabi at home. It should be factored on your talent – because we have a common South Asian thinking.

“Performing arts knows no limits. We have different geographies but we’re aiming for one thing and that is to be able to act.”

At the end of the course there will be a one-week optional visit for the students to Mumbai to take a look at Bollywood sets and meet the stars there.

Kher says he already has plans to continue launching similar schools around the world. “I am looking at Durban and Sydney,” he said.

The Indian film industry is one of the largest in the world, producing more than 1,000 films every year.

It is believed to draw audiences of more than 3.5 billion people – half of the world’s population. 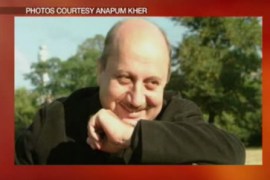 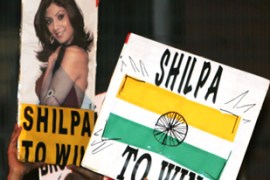 Shilpa Shetty wins television show, in which she was subjected to racial taunts.