Toshiba has said it is abandoning the HD DVD format for next-generation video, effectively surrendering to Sony’s rival Blu-ray system.

The Japanese electronics giant said late on Tuesday that it would no longer develop, make or market HD DVD players and recorders.

The move follows days of speculation that Toshiba was preparing to concede defeat in the relatively short-lived format war over high-definition video.

“We concluded that a swift decision would be best,” Atsutoshi Nishida, Toshiba’s president, told reporters at his company’s Tokyo office.

Toshiba said shipments of new HD DVD machines to retailers would stop by the end of March.

The move deals a blow to an estimated one million consumers worldwide who have purchased HD DVD players and recorders, which are now set to become obsolete.

Nishida said the recent decision by Hollywood studio Warner Bros. to release movie discs only in the Blu-ray format made the decision inevitable.

“That had tremendous impact,” he said. “If we had continued, that would have created problems for consumers, and we simply had no chance to win.”

Warner’s announcement came just days after US retail giant Wal-Mart announced it was stopping sales of HD DVD players and discs and would only stock Blu-ray.

Blu-ray is backed by manufacturers Sony and Matsushita – owners of the Panasonic brand, among others, as well as five major Hollywood movie studios.

The expected collapse of HD DVD is also likely to deal a heavy blow to Microsoft, which had backed the format, incorporating a player into its latest Xbox 360 gaming consoles.

But despite the blow to Toshiba’s pride as well as hundreds of millions of dollars in write-offs, analysts say the decision to halt HD DVD exit would likely be good for business.

Earlier Goldman Sachs said such a move would improve Toshiba’s profitability by between $370m-$463m.

On Monday shares in Toshiba jumped more than 6 per cent in Tokyo on speculation that an announcement on HD DVD was imminent.

Both Blu-ray and HD DVD deliver superior video and audio quality compared with standard DVDs, but they are incompatible with each other.

Analysts say the rival formats led many consumers to avoid upgrading to high-definition DVD players because they were unwilling to invest in technology that may become obsolete.

Toshiba was also criticised for poor marketing and its failure to secure solid backing from Hollywood for the HD DVD format.

Sony, by contrast, was able to use its own strong connections to the film industry to woo five of the big seven studios over to Blu-ray.

The battle over the next generation DVD formats had been likened to the home video tape war of the 1980s between VHS, developed by JVC, and Betamax, backed by Sony.

Betamax eventually lost out in the consumer market, despite its superior picture quality. 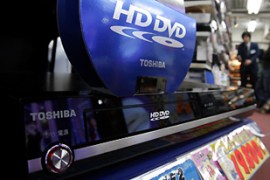 Debate on DVD formats heats up

In the entertainment industry, disagreements have risen to the level of tradition when the talk is about which format is best for recording video.

Hollywood studios are locked in a battle over adopting a standard for high-definition digital video disc technology, in an apparent replay of the 1980s struggle between VHS and Betamax video formats.