The intake of breath. The tensing of the muscles. The knowledge that the blow is coming. The hope that it won’t be too painful.

That’s what it’s like in Ukraine, waiting for the next wave of Russian missile strikes.

Everyone knows it’s inevitable. It’s just a question of when. And how bad.

Since October 10, every few days, Russia has deployed its strategic bombers and warships to unleash aerial devastation on Ukraine’s critical infrastructure.

Cruise missiles have smashed into power plants and water facilities.

Most are shot down by Ukrainian air defence. But enough get through to take large parts of the energy grid down completely.

For days after, people shiver in dark, cold homes. They cook on camping stoves in candlelit kitchens. They put on all their clothes to sleep and cover themselves with every blanket they own.

Engineers work double or triple shifts to repair or replace fried circuits and blackened transformers. After a few days, the power is fixed.

Then, Russia does it again.

Cumulatively the effect is bringing the country’s energy network to its knees. Capacity has been significantly reduced. Emergency and scheduled blackouts continue, even when the power is restored.

Ukraine and its allies say that Russia is using winter as a weapon – and it’s hard to disagree with that.

And while Ukraine insists Russia is committing a war crime, the international laws of warfare are not so clear cut.

Electrical systems can be claimed as legitimate targets if they’re used by the military, as well as civilians. Most militaries do, and Ukraine’s is no exception. The United States has targeted energy infrastructure in North Korea, Vietnam, and Iraq.

The other day, I went out with the team to film in Kyiv’s suburbs on a gloomy, powerless, late autumn day.

The recent snow was starting to show its age – thawing into big, dirty brown puddles as the temperature hovered just above zero.  At random, we stopped at a looming Soviet-era residential tower block.

We turned our head torches on in the pitch-black lobby. Our frosty breath billowed in the beams of light as we trudged up seemingly endless flights of stairs. 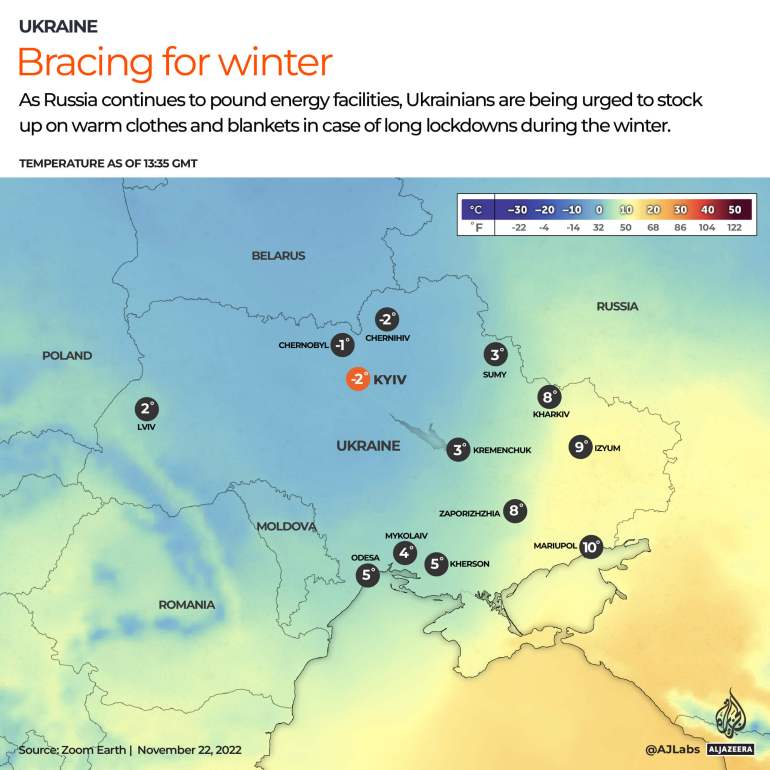 On the eighth floor, we tried a few doors.

The only one to open was Alyona’s. And amazingly, she welcomed in the strange men loitering in the dark corridor.

Alyona lives in a two-room flat with her toddler son and her truck driver husband.

She’d rigged up battery-powered fairy lights to combat the murk.

“Like Christmas atmosphere in November,” she said with a grin. The family sleeps in the same bed which helps to keep warm.

I asked Alyona what effect the air strikes and the blackouts were having on morale.

“No one I know is ready to have negotiations with Russia because of these strikes,” she told me. “It just makes us hate them more.”

It’s the type of defiance you hear much of in Ukraine. The message is simple: If living without electricity means Ukrainians can live without Russia, then they say they’ll take it.

I chose to film my reporter’s piece to camera back out on the tower block’s chilly stairwell.

Between takes, we paused. Voices were reverberating up from far below. It seemed an age until their owners reached us.

It was a woman, Lyudmilla, and her two kids. She was staggering up with one of the children in her arms, puffing on the stairs as she cursed the Russians flamboyantly.

As she passed us, she smiled and gasped the words that have become the national greeting since the war began: “Slava Ukraiina!” – Glory to Ukraine.