Moscow, Russia – Sanctions have noticeably complicated life for Alexander, a 23-year-old art museum worker from Moscow. Surging prices have forced him to cut back his spending and explore getting a side job to help pay the bills. At the same time, finding certain goods that he once took for granted, such as furniture and other household items, has become a far more cumbersome process.

Nevertheless, Alexander, who declined to give his last name, is optimistic that sanctions will provide some unexpected benefits for Russia in the long run. “It’s as though we have more opportunities now and our country has remembered that it is also capable of producing its own goods,” he said. “This could potentially open the door for something new and positive.”

Over the past six months, sanctions have dramatically changed Russia’s economic relationship with the outside world. In the three decades after the collapse of the Soviet Union, Russia readily embraced the tenets of globalised capitalism. Even though political relations between Moscow and the West were often tense, economic ties between the two remained robust. Middle-class Russians could easily book flights to Europe or buy the latest Western consumer products, ranging from smartphones to jeans. Basic financial operations such as sending or receiving money abroad could be done in a matter of minutes.

Now that era may be over for good. Following the Kremlin’s decision to send troops into Ukraine, the United States and its allies in Europe and Asia quickly moved to impose unprecedented sanctions against the Russian economy.

Some of the measures they adopted include freezing nearly half of Russia’s financial reserves, expelling several of the country’s largest banks from the SWIFT payments system, prohibiting Russian ships and planes from entering their ports and airspace, introducing export restrictions for certain advanced technologies, and placing an embargo on Russian oil and coal.

Simultaneously, more than 1,200 foreign companies have either suspended or curtailed their operations in Russia since the start of the conflict in Ukraine, according to a database from Yale University’s Chief Executive Leadership Institute. Among the big names on that list are brands such as Apple, McDonald’s, IKEA, Visa, and MasterCard.

So far, the new sanctions regime has brought mixed results. On the one hand, Russia’s gross domestic product (GDP) fell by 4 percent in the second quarter compared with the same period last year, a decline that is expected to accelerate to 7 percent in the third quarter. The new supply restrictions have not only caused inflation to climb into the double digits, but also undercut Russian manufacturers by depriving them of imported components that are critical to assembling their final products. Russia’s car production, for instance, plummeted by a stunning 61.8 percent during the first six months of this year.

Many Russian officials have admitted that it will be especially challenging to find replacement for certain high-end electronic components, such as microchips, which are still overwhelmingly developed using Western technologies.

At the same time, however, the Russian economy has so far demonstrated greater resilience than many initially expected. Despite losing more than 30 percent of its value in late February and early March, the Russian rouble has since rebounded to become the best-performing currency of the year. Inflation has begun to gradually slow down in recent months, falling from its peak rate of 17.8 percent in April to 14.9 percent in August. Meanwhile, Russia’s current account surplus has swelled to a record high of $167bn between January and July, more than triple from a year ago.

So far, sanctions have not done much to dampen life in Moscow at least. Construction workers taking part in the Russian capital’s annual street renovation programme are seemingly everywhere. Downtown restaurants, bars, and cafes are teeming with boisterous patrons. Shopping malls are likewise filled with people, even though many Western-owned stores have been closed for months. During a trip to the grocery store, the average consumer is greeted by a wide range of products, including foreign treats.

“People are tired of constantly feeling anxious so they’re doing their best to return to a more normal life,” said Alexander, the Moscow art museum worker. “I see very few people limiting themselves when it comes to meals at restaurants and things of that nature. They may have less money than before, but they still have some.” 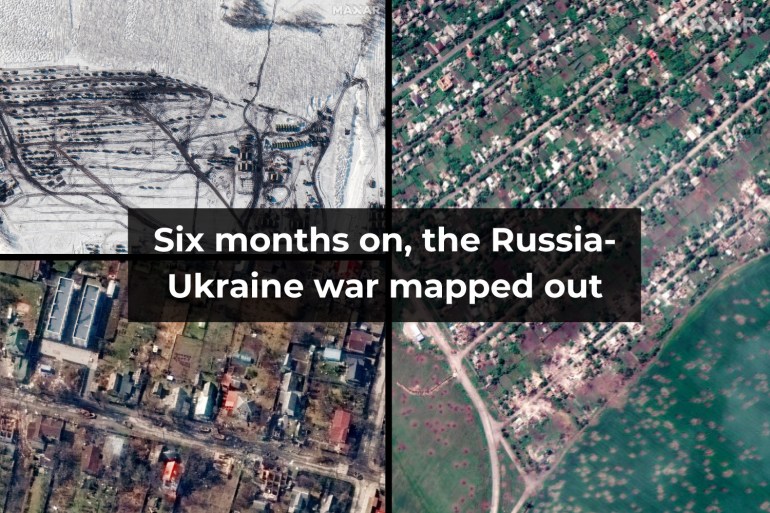 Last month, the International Monetary Fund improved its economic outlook for Russia in 2022, predicting that the country’s GDP would shrink by 6 percent instead of the originally projected 8.5 percent. That is still a significant decline, but much less than some of the more dire initial forecasts.

Anton Tabakh, chief economist at Moscow-based credit assessor Expert RA, told Al Jazeera that two factors had buoyed the Russian economy during the first six months of the new sanctions regime. The first was a big surge in commodity exports, especially energy. According to a government document seen by Reuters news agency, Russia is expected to earn more than $337bn from its energy sales this year, a 38 percent increase from 2021. The second factor is a rise in government spending.

Tabakh said Russia’s export boom has likely peaked due to falling global demand and new embargo restrictions coming into force. At the same time, he noted that Russia’s imports have gradually begun to recover after a sharp fall earlier this year. The main driving forces behind this rebound have been the stabilisation of the rouble and improved logistics.

“The key question now is how Russia’s economy will undergo what the Russian Central Bank calls a process of structural transformation,” Tabakh said. “We’re talking about the consumers switching to new products, the emergence of new supply chains and financial intermediaries, and companies adapting to the new restrictions. By my estimates and those of the Central Bank, we’re currently in the most difficult phase of the process, which could last anywhere between nine months to a year.” 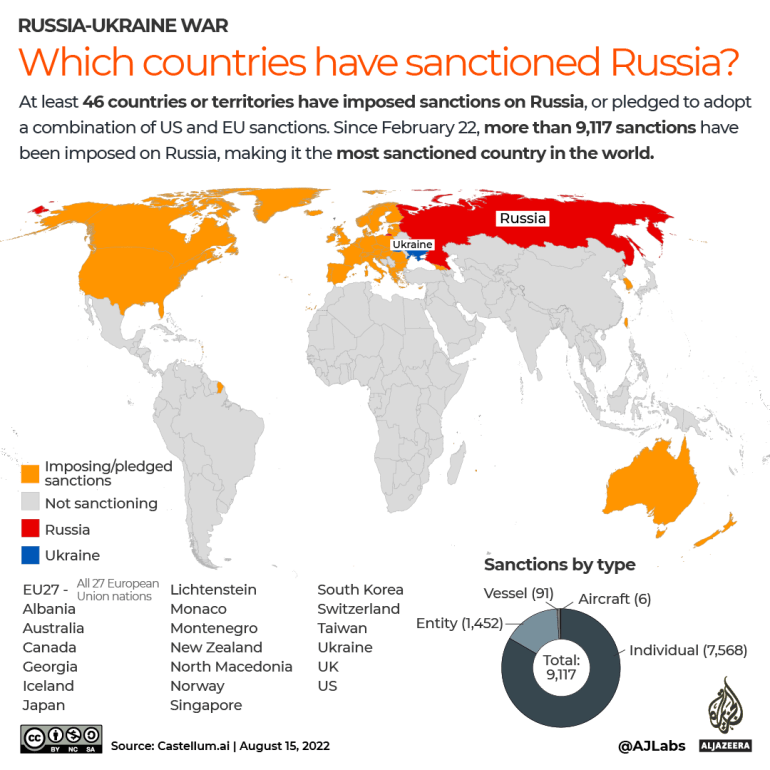 For some Russian entrepreneurs, sanctions have become an unexpected source of opportunity. Nikolai Dunaev, the vice president of Opora Russia, a national association of small and medium business owners, said the mass exodus of multinational giants from Russia has created an opening for domestic companies to expand their market share — especially in areas such as food products, cosmetics, clothing, tourism, and construction.

“There is an overall fall in demand among consumers, but this is not being felt as severely in Russia because much of the remaining demand has shifted toward domestic producers,” he said.

Non-Western economies are also playing an increasingly important role in Russia’s sanctions response strategy. For instance, the growth in manufacturing in Asia and the Middle East in recent decades has made it easier for Russia to find replacements for most kinds of Western goods, Tabakh pointed out.

At the same time, Moscow has begun filling in its economic gaps through parallel import schemes, under which Russian companies import Western branded goods including smartphones, cars and clothing from third-party countries and then resell them on the Russian market without permission from the trademark owners.

“These sort of options are almost always more expensive and less user-friendly, but in the end, they help ease the blow from sanctions,” Tabakh said. “The fact that we even have such options illustrates how much the world has changed from the way it was 30 years ago, when the West totally dominated.”

The bigger question is to what extent Russia’s economy will be able to undergo its “structural transformation” in the long run, however. Can Russia successfully rebuild its economy on a new foundation or is doomed to years of economic and technological decline?

There are two important factors that could potentially work in Russia’s favour, according to Chris Devonshire-Ellis, founder of Dezan Shira & Associates, a pan-Asian investment consulting firm.

The first is that Moscow possesses many of the natural resources that are critical to the broader global economy. “When you look at Russia, it has the first, second and third highest reserves globally of practically everything,” he said. “From energy to diamonds, to fresh water, to rare earths and other minerals, it’s an extremely rich country.”

And despite its current estrangement from the West, the Kremlin was far from being geopolitically isolated, Devonshire-Ellis said. “Russia has some powerful friends, such as China, India, and Iran, and some increasingly powerful acquaintances, such as Saudi Arabia, Turkiye, Brazil, and much of Africa,” he said. “On balance, therefore, I suspect that Russia will prevail.”