By Sankalp Phartiyal and Saritha RaiBloomberg

Apple Inc. plans to begin manufacturing the iPhone 14 in India about two months after the product’s initial release out of China, narrowing the gap between the two countries but not closing it completely as some had anticipated.

The company has been working with suppliers to ramp up manufacturing in India and shorten the lag in production of the new iPhone from the typical six to nine months for previous launches, according to people familiar with the matter. Apple, which long made most of its iPhones in China, is seeking alternatives as Xi Jinping’s administration clashes with the US government and imposes lockdowns across the country that have disrupted economic activity.

Analysts such as Ming-Chi Kuo of TF International Securities Group have said they anticipate Apple will ship the next iPhone from both countries at roughly the same time, which would have been a significant benchmark in Apple’s efforts to diversify its supply chain and build redundancy.

Foxconn Technology Group, the primary manufacturer of iPhones, studied the process of shipping components from China and assembling the iPhone 14 device at its plant outside the southern Indian city of Chennai, said the people, who asked not to be identified because the efforts are confidential. That included looking at ways to maintain Apple’s high standards for confidentiality.

Apple and Foxconn ultimately determined a simultaneous start in India and China isn’t realistic this year, although it remains a long-term goal, said the people. The first iPhone 14s from India are likely to be finished in late October or November, following the initial September release, they said. An ambitious target would be the Diwali festival that begins Oct. 24, one person said.

A spokesman for Cupertino, California-based Apple declined to comment. Foxconn did not immediately respond to requests for comment.

Redington India Ltd., which distributes Apple products in the country, rose as much as 9.5% after Bloomberg’s initial report. 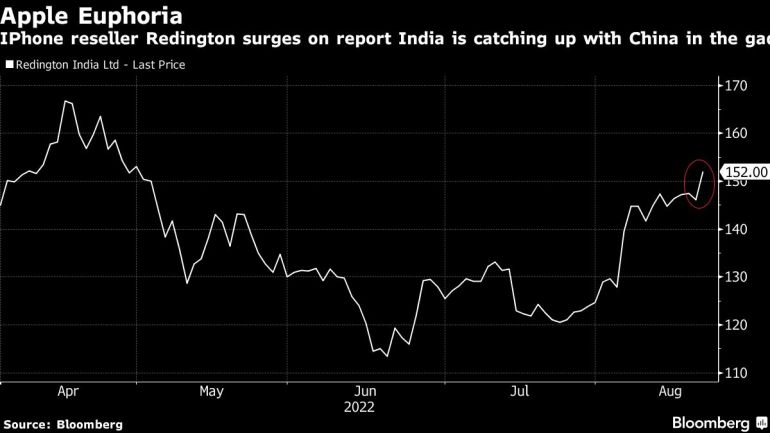 Matching China’s pace of iPhone production would have marked a major milestone for India, which has been touting its attractiveness as an alternative at a time when rolling Covid lockdowns and US sanctions jeopardize China’s position as factory to the world. Assembling iPhones often entails coordination between hundreds of suppliers and meeting Apple’s infamously tight deadlines and quality controls.

Some people within Apple and Foxconn had hoped to begin simultaneous production in India this year, but that was never an official plan. To ensure a smooth launch, Apple wanted to focus on getting the China operations up to speed first and then work out the India production, one of the people said.

Apple’s partners began making iPhones in India in 2017, the start of a yearslong effort to build manufacturing capabilities in the country. Besides offering backup to its existing operations, the country of 1.4 billion people is a promising consumer market and the Modi administration has offered financial incentives for tech production under its Make in India program.

One challenge in narrowing the cap on India production is secrecy. Apple goes to extreme lengths to keep new product details confidential, and imposing the same rigorous controls in a second country would prove difficult.

Local executives in India examined entirely cornering off a section of one of Foxconn’s multiple assembly lines, sequestering workers and scrutinizing all possible ways in which the security around the device could be compromised, according to two of the people. Thus far, the drastic security controls and stringent seclusion of its China facilities would be challenging to replicate, one of the people said.

Apple has also been concerned about Indian customs officials, who typically open up packages to check whether imported materials match their declarations, another potential vulnerability for product secrecy.

Even if Apple and Foxconn intended a simultaneous launch, supply-chain challenges would have stymied the goal. China, the source of many iPhone components, has gone through successive waves of lockdowns, complicating the process of shipping components through the country.

India’s workforce and factories haven’t easily adopted the highly controlled practices that Apple requires from suppliers. Since Apple began assembling iPhones in India through contract manufacturers Foxconn and Wistron Corp. five years ago, workers have revolted over salaries and the quality of food in two prominent incidents.