US job vacancies fell in June to their lowest level in nine months, suggesting that labour market tightness may be loosening up a bit amid mounting economic challenges.

The Job Openings and Labor Turnover Survey, or JOLTS, released by the US Labor Department on Tuesday, revealed that job openings fell to 10.7 million in June from a higher-than-expected 11.3 million in May. The fall of 605,000 was the most since April 2020.

“This improvement in labor market balance suggests that wage growth should slow in the second half of 2022,” economists at Goldman Sachs said in a Tuesday note.

Retail and wholesale trade sectors saw a decrease of 343,000 and 82,000 positions, respectively. Construction also saw a decline of 71,000 openings.

On the upside, job openings increased 79,000 in healthcare and social assistance.

Despite the drop, there are still a lot of open positions. As a result, labour expenses have increased. But many Americans are still seeing salary growth fall behind surging inflation. 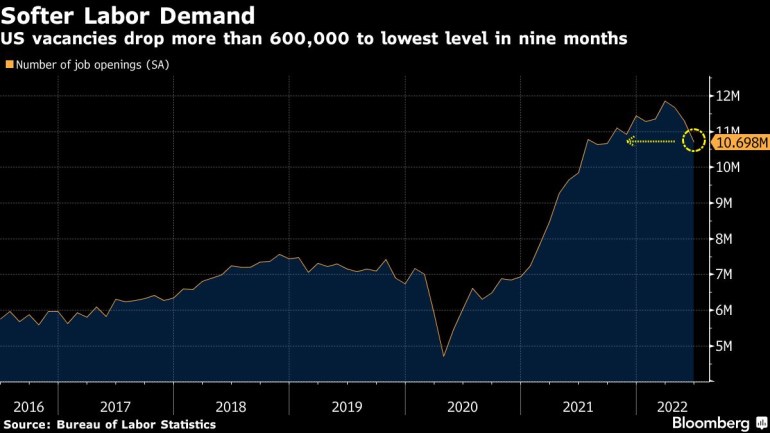 The US labour market has remained robust as the wider economy experiences challenges. Last week, the Federal Reserve raised interest rates 75 basis points for the second consecutive time. It is likely to continue to increase borrowing costs at its next meeting in September.

“The current picture is plain to see. The labour market is extremely tight, and inflation is much too high,” Fed Chair Jerome Powell said last Wednesday.

The US central bank hopes to bring demand into better balance with supply with the ultimate goal of bringing inflation back down to its 2 percent goal. The consumer price index (CPI), a gauge of inflation, jumped 9.1 percent in June from a year earlier – the largest gain since 1981.

There are some signs that the jobs market may be faltering. Several tech giants including Apple, Amazon and Google’s parent Alphabet have recently said that they would slow hiring. E-commerce firm Shopify announced last week that it is cutting 10 percent of its labour force or 1,000 workers after reporting a post-pandemic slowdown in business.

But the JOLTS numbers for June showed that layoffs dropped slightly. Many companies continue to report difficulties in attracting and retaining workers. There were about two jobs available for every unemployed person in June, the Labor Department said.

“Layoffs continue to be low in historical terms and high levels of quits signal workers seeking [and finding] better opportunities,” Elise Gould, senior economist at the Economic Policy Institute, said in a note on Tuesday.

Millions of Americans quit their jobs during the height of the coronavirus pandemic in a phenomenon now called the Great Resignation.

In June, the quits rate, a measure of voluntary job leavers as a share of total employment, held at 2.8 percent.

Some 4.2 million Americans quit their jobs that month.