Tesla Inc Chief Executive Officer Elon Musk sold $6.9bn worth of shares in the electric vehicle maker, tweeting it was important to avoid an emergency sale of Tesla stock amid a legal showdown with Twitter Inc over a $44bn takeover deal.

Musk sold about 7.92 million shares on August 5, according to a series of regulatory filings that landed after US markets closed on Tuesday. He now owns 155.04 million shares in Tesla.

As speculation mounted over the reason for the disposal, Musk responded in a series of late-night tweets, saying he wanted to avert an emergency sale of stock.

Asked by followers if he had finished selling Tesla shares and would buy the stock again if the deal does not close, Musk responded: “Yes.”

But legal experts have suggested that if Musk loses his battle against Twitter and is forced to complete the acquisition or pay a stiff penalty, he could conceivably have to sell more Tesla shares.

Musk tore up his April 25 agreement to buy the social media platform and the two sides face a drawn-out legal battle that could still cost Musk billions of dollars. The two sides head to trial on October 17.

“He certainly is clarifying that he is cashing up for Twitter,” said Charu Chanana, strategist at Saxo Capital Markets Pte in Singapore. “The timing of the sale – just ahead of the US CPI release – does say something, though. The bear market rally has started to falter, and further repricing of Fed expectations could mean more pain for equities ahead, especially in tech.” 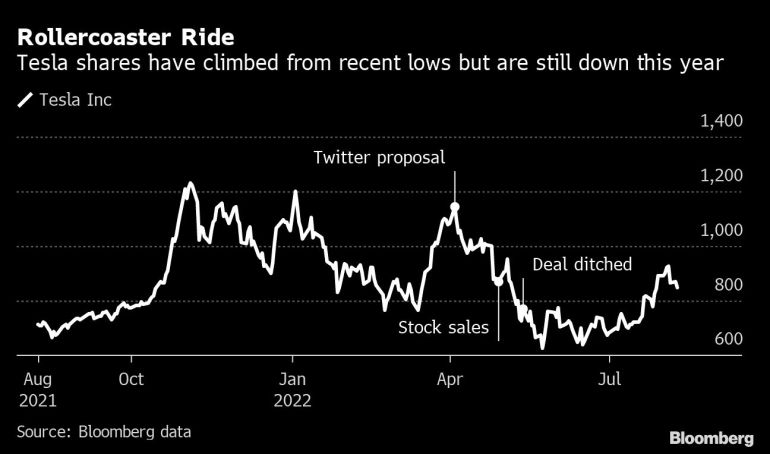 The latest sales bring total stock sales by Musk to about $32bn in less than one year. Tesla shares have risen about 35 percent from this year’s lows, though are still down about 20 percent this year.

Musk, the world’s richest person, had said in April that there were “no further TSLA sales planned” – after he sold $8.5bn worth of shares in the company back then.

Musk’s $250.2bn fortune is the world’s largest, according to the Bloomberg Billionaires Index, but his wealth has fallen by about $20bn this year as Tesla shares declined.

The carmaker’s shareholders approved a three-for-one stock split last week, a move designed to attract an even larger number of retail investors given the shares’ recent rebound. Tesla’s better-than-expected second-quarter earnings have been a tailwind, along with landmark US climate change legislation that aims to boost the use of clean energy through a series of tax incentives.