By Dan Murtaugh and Debjit ChakrabortyBloomberg

Russia has pocketed $24 billion from selling energy to China and India in just three months following its invasion of Ukraine, showing how higher global prices are limiting efforts by the US and Europe to punish President Vladimir Putin.

China spent $18.9 billion on Russian oil, gas and coal in the three months to the end of May, almost double the amount a year earlier, latest customs data show. Meanwhile, India shelled out $5.1 billion in the same period, more than five times the value of a year ago. That’s an extra $13 billion in revenue from both countries compared to the same months in 2021. 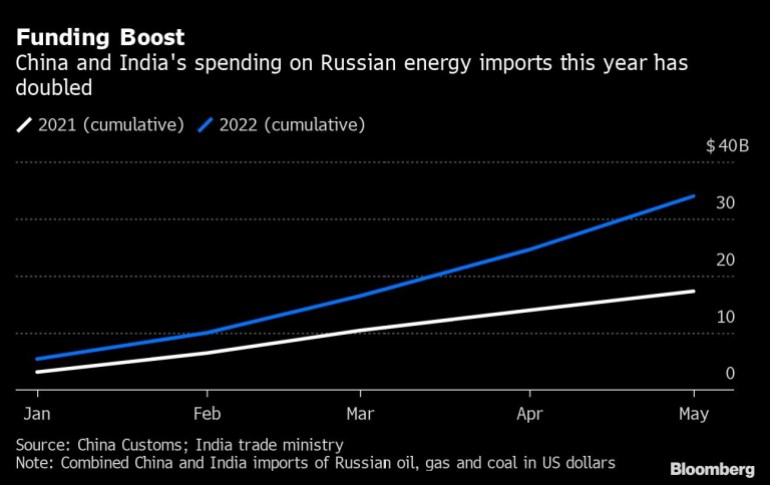 The higher spending is helping make up for decreased purchases from the US and some other nations that have halted or slowed buying to punish Russia for the war. The bans have sent prices for alternative supplies soaring and spurred crippling inflation that threatens to send major economies into recession.

“China is already buying essentially everything that Russia can export via pipelines and Pacific ports,” said Lauri Myllyvirta, lead analyst at the Centre for Research on Energy and Clean Air, who has been tracking Russian energy flows since the war broke out. “India has been the main buyer of the cargoes out of the Atlantic that Europe doesn’t want anymore.” 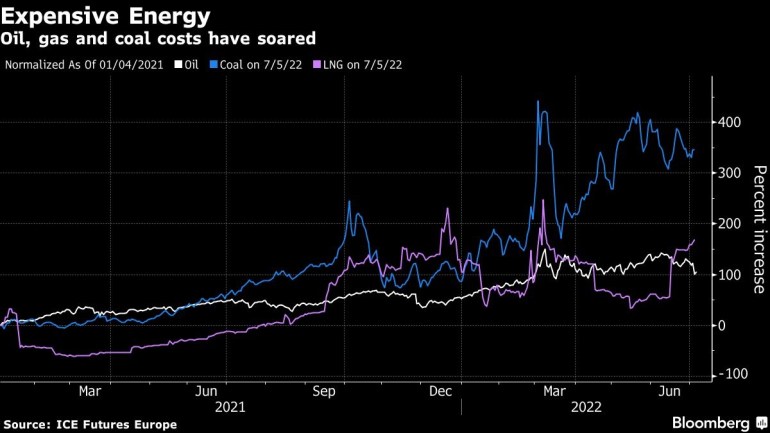 That spree is unlikely to end anytime soon, with energy prices much higher than they were at this time last year, even accounting for the steep discounts to global benchmarks Russia is offering to entice purchasers. On a volume basis, China’s imports continued a slow uptick in June, while India may have incentive to boost purchases even further in the coming months as a European Union ban on Russian oil takes effect, Myllyvirta said.

China and India still trail Europe as a bloc in terms of overall sales this year, according to Myllyvirta’s research. Europe’s purchases will continue to shrink, though, as import bans on coal and oil come into effect and as Russia cuts off gas supplies to some European buyers.

Russia has long-standing trade and strategic relationships with China and India, and along with offering steep price discounts is also accepting payments in local currency to help keep trade flows to the countries strong this year. 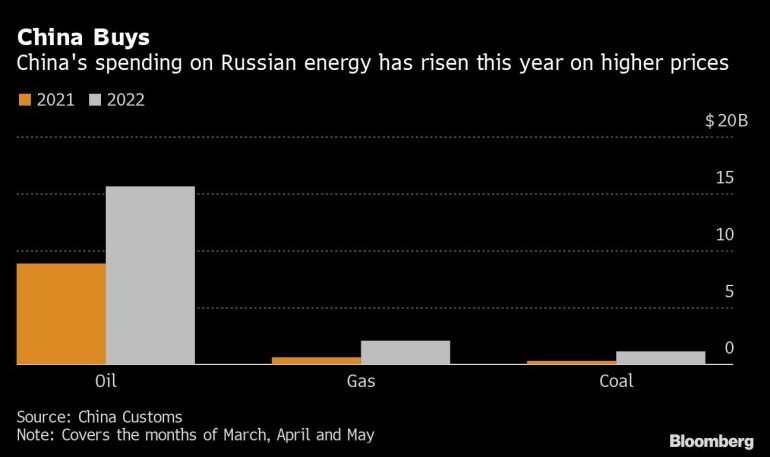 China is the world’s biggest energy importer and has dedicated pipelines for Siberian oil and gas. Even as its energy consumption was curbed over the first half of 2022 — partly due to Covid-19 lockdowns — it spent far more on Russian energy due to higher prices and small increases in volumes.

India’s increase in spending after the war has been far more dramatic, as it doesn’t share a land border with Russia and its ports are normally too far away for cost-efficient shipping. The country spent $8.8 billion on petroleum and coal imports from Feb. 24 to June 30, more than it doled out for all Russian goods for the entire year in 2021, according to a trade ministry official, who requested anonymity as the data is not public. India’s trade ministry spokesperson did not comment.

In addition to big jumps in oil and coal, India also imported three cargoes of Russian liquefied natural gas since the war began, compared to one in the same period last year, according to Bloomberg ship-tracking data. 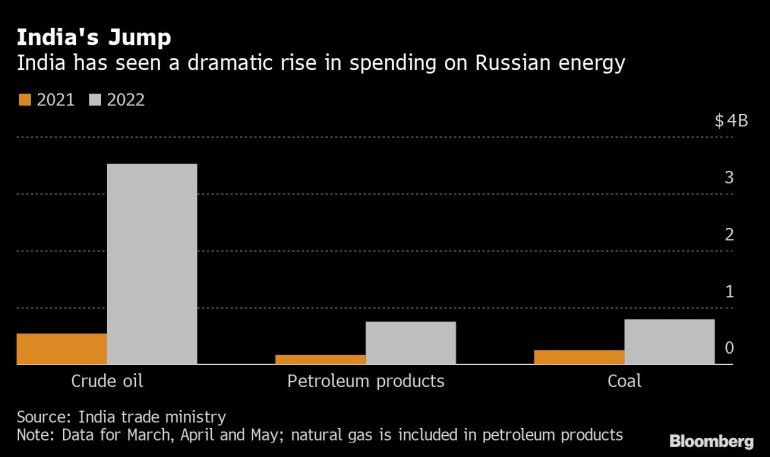 “Historically, India has taken very little Russian oil, but the war in Ukraine and Russian-origin oil embargoes by the Europe Union have led to a rebalancing in oil trade flows,” Wei Cheong Ho, a Rystad Energy analyst, said in a research note last month.

–With assistance from Stephen Stapczynski and Ruchi Bhatia.