US business activity contracted in July for the first time in more than two years as manufacturers and service providers signaled sluggish demand that only adds to heightened recession anxieties.

The S&P Global flash composite purchasing managers output index slid 4.8 points to 47.5, the weakest reading since May 2020, the group reported Friday. Outside of the early months of the pandemic, the July figure is the weakest in data back to 2009. Readings below 50 indicate contraction. The new orders gauge expanded modestly after contracting the previous month. 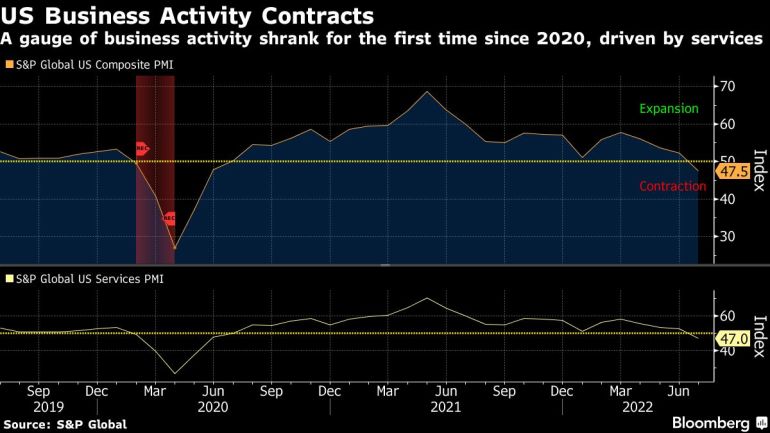 “The preliminary PMI data for July point to a worrying deterioration in the economy,” Chris Williamson, chief business economist at S&P Global Market Intelligence, said in a statement.

“Manufacturing has stalled and the service sector’s rebound from the pandemic has gone into reverse, as the tailwind of pent-up demand has been overcome by the rising cost of living, higher interest rates and growing gloom about the economic outlook,” Williamson said.

Similar results were seen in Europe. The group’s index of activity in the euro area unexpectedly shrank for the first time since early 2021. Output worsened among manufacturers, while growth in the service sector came close to stalling.

The US contraction was led by a steep decline in service-sector activity. The group’s services gauge slid to 47, the lowest print since May 2020. Excluding the pandemic, the July figure was the weakest in records back to 2009. Even so, firms continued to add jobs at a solid pace.

Meantime, the group’s manufacturing index eased to a two-year low of 52.3 in July. New orders shrank for a second month and employment growth slowed. Export orders also contracted as a stronger dollar and grimmer global picture weighed on foreign demand.

Inflation metrics softened somewhat in the month, though remained extremely elevated. The group’s composite gauge of input prices eased to a six-month low and the output prices measure dropped to the lowest since March 2021.

Firms’ expectations for the future also deteriorated, falling to the lowest since 2020, as weaker demand and inflation weighed on sentiment.