Tesla Inc has reported a smaller-than-expected drop in quarterly profit as a string of price increases on its electric vehicles (EVs) helped offset production challenges caused by COVID-19 lockdowns in China.

Chief Financial Officer Zachary Kirkhorn on Wednesday said Tesla was still pushing to reach 50 percent growth in deliveries this year, adding that while the target had become more difficult, “it remains possible with strong execution”.

Chief Executive Elon Musk said he expects inflation to start easing by end-2022 and most commodity prices to stabilise.

Tesla does not have a demand problem but a production problem, Musk told a conference call. He dismissed the idea that global economic issues were hurting interest in Tesla, despite vehicle prices rising to what he called “embarrassing levels”.

Shares of Tesla were up about 1 percent in after-hours trading. The shares are down about 40 percent from their peak in November.

Tesla’s China factory ended the second quarter with a record monthly production level. Musk said new factories in Berlin and Texas aimed to produce 5,000 cars a week by the end of the year, adding that the German plant produced 1,000 cars a week in June.

Musk had previously said the new factories were “gigantic money furnaces” and that he had “a super bad feeling about the economy”.

Morgan Stanley analysts said in a report after Tesla’s earnings announcement that they see “near-term margin headwinds due to (new) challenges with ramping new production, particularly in Berlin”.

Tesla executives acknowledged some continuing tightness in supplies of older-generation microchips, but said there were no significant problems in supplies of chips and batteries, barring unforeseen COVID-related shutdowns. 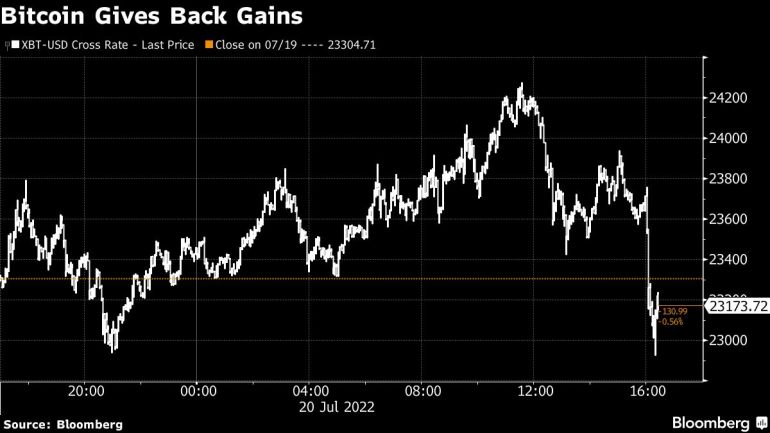 The EV maker posted an adjusted profit of $2.27 per share for the quarter versus analysts’ consensus estimates of $1.81. This was down from $3.22 in the preceding quarter.

Its automotive gross margin fell to 27.9 percent, down from a year earlier and the preceding quarter, amid inflationary pressure.

Tesla’s total revenue fell to $16.93bn in the second quarter from $18.76bn a quarter earlier, ending its streak of posting record revenue in recent quarters.

Analysts were expecting revenue of $17.10bn, according to IBES data from Refinitiv.

Tesla said it had converted approximately 75 percent of its Bitcoin purchases into fiat currency, which added $936m of cash to its balance sheet.

Musk said the sale was made to increase liquidity when Tesla was uncertain about how long the COVID lockdown in China would continue. Tesla has not sold any of its holdings of the Dogecoin cryptocurrency.

“This should be not taken as some verdict on Bitcoin,” he said, adding that Tesla was open to increasing its cryptocurrency holdings in the future.

Musk had said in May last year that Tesla would not sell its Bitcoin.

“The Bitcoin losses point out an important part of the Tesla investment case – its eccentric owner. While Musk’s impressive innovation has served the company well, his personal flair is starting to raise governance questions,” said Laura Hoy, an analyst at Hargreaves Lansdown.

Musk has become a huge influencer in cryptocurrency. He has tweeted favourably about Dogecoin as an alternative currency and posted photos of his dog Floki, which like the Dogecoin mascot is a Shiba Inu. When Tesla held a big party for its new Austin, Texas factory in April, a drone show featured a Dogecoin image.

Musk’s embrace of Bitcoin had helped serve as a catalyst for the digital currency after Tesla briefly accepted the token for purchases, but it later suspended the payment option citing environmental concerns about its mining processes. The further pullback marks a hawkish move from one of the crypto sector’s most prominent bulls during what has been termed as a “crypto winter”.