India’s political ties with the Gulf region may be strained over insulting remarks made by members of India’s ruling Bharatiya Janata Party (BJP) against Prophet Muhammad, but the jury is out on whether tensions will impact the economic relationship that has evolved to new heights in recent years.

Bilateral trade between Asia’s third-largest economy and the six-member Gulf Cooperation Council (GCC) countries – including Saudi Arabia and the United Arab Emirates – increased significantly in the financial year ending March 2022, topping $150bn according to government data. India’s exports to the Gulf were nearly $44bn, up 58 percent from the previous year, and it imported close to $111bn from the region, an 85 percent jump.

Under India’s trade pact with the UAE, which came into force last month, the total value of bilateral trade in goods is expected to increase to more than $100bn, and trade in services to more than $15bn, within five years.

This and other moves like investments in Indian businesses by the sovereign wealth funds of Saudi Arabia and UAE are seen as the maturing of economic ties between India and the Gulf, beyond the decades-old areas of oil and remittances.

However, with hashtags like #BoycottIndiaProducts and  #Stopinsulting_ProphetMuhammad trending on Twitter and Facebook in Gulf countries after two BJP spokespersons were reported late last month to have insulted the Prophet and his wife, raising fears of possible economic repercussions.

It did not help that some Indian goods were pulled off shelves in a supermarket in Kuwait. In all, a dozen countries, including Bahrain, Indonesia, Jordan, the Maldives and the UAE, joined Afghanistan, Iran, Kuwait, Oman, Qatar and Saudi Arabia in lodging official complaints with the Indian government.

The call to boycott Indian products was matched by calls from some quarters in India to boycott Gulf-based airlines like Qatar Airways, according to media reports.

“The problem is with the image [of India] and the narrative,” said Happymon Jacob, a professor of international relations at the New Delhi-based Jawaharlal Nehru University (JNU).

“At the political level, the damage seems to have been contained, there are no barbs being exchanged between the two sides,” he said.

But Gulf countries will be following the ongoing protests in India over the insults to the Prophet and watching how the Indian government deals with them.

“If India is seen going after domestic protesters with a heavy hand, it could create a negative narrative against India in the longer term that could affect economic ties,” Jacob said.

Talmiz Ahmed, a former Indian ambassador to Saudi Arabia, Oman and the UAE agreed that the economic effects of comments by the now-former BJP functionaries could be felt for a while.

“Joint ventures between companies, the recruitments for jobs, for instance, are made by private companies or private individuals … not government-to-government. The partners in the Gulf may say: ‘We don’t know what kind of people [from India] we are recruiting, what kind of views they hold,’ etc. The impact of these things is felt over a period of time,” Ahmed said.

JNU professor of international trade Biswajit Dhar says that economic interdependence between India and the GCC will save the day.

“The two regions are so dependent economically on each other, it is difficult to find substitutes and replacements,” said Dhar. “They may be wary of developments in India, but I don’t think it will escalate beyond this point.”

Ironically, the controversy erupted just as India was working to elevate its ties with the GCC, looking to them as an export market as well as a source of investments in sectors like infrastructure and startups.

The initiative to refashion India’s ties with the Gulf – dubbed its “Look West” policy – is led by Prime Minister Narendra Modi, who visited several countries in the Gulf and Western Asia and hosted their leaders in New Delhi.

The importance of the Gulf

Ask any Indian diplomat about ties between India and the Gulf and they will tell you the two regions have had economic and cultural links for centuries.

In recent decades, these ties have been defined by India’s energy needs, security concerns and the large Indian expatriate community.

India imported 212.2 million metric tonnes of oil, worth nearly $120bn, in the financial year ending March 2022. Of this, a little more than 60 percent came from the Gulf, with Iraq and Saudi Arabia the top two suppliers. India also imports natural gas from Qatar, its largest supplier of LNG, accounting for more than half of Indian LNG imports.

Of the 32 million overseas Indians, eight to nine million are in the Gulf region and they send back roughly half of all remittances. Indians abroad sent back $83bn in remittances in 2020 and were expected to send back $87bn in 2021.

“So yes, this region is vitally important to India,” said JNU’s Dhar.

From a security perspective, the Gulf countries that used to back India’s archrival Pakistan have realised the potential in India – seen as “an engine of growth in Asia” – said a government official familiar with India-GCC commercial relations, who did not want to be named.

“The strength and promise of the Indian economy is something all these countries have witnessed and they are keen to forge ties with us,” the person said, improving security ties along the way.

During his February 2019 visit to India, Saudi Crown Prince Mohammed bin Salman pledged a potential investment of $100bn in energy, infrastructure, agriculture, education and health, among others. 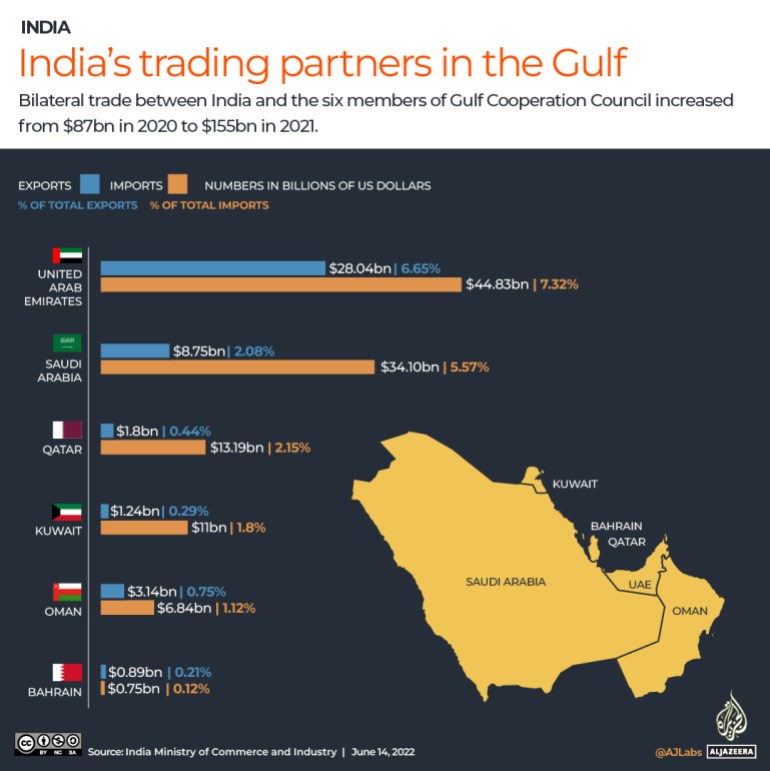 Some of that may be playing out already.

According to Pramit Pal Chaudhury, visiting fellow at New Delhi-based Ananta Aspen Centre think-tank, India’s work on its “new relationship around investment, technology and high-end Indian exports … is much more beneficial to India”.

New Delhi is also hoping to bring Gulf-based businesses to invest in Indian-administered Kashmir. India has been pushing to enter the region more fully and quash a rebellion there against its control – especially since it stripped the region of its autonomy and brought it under New Delhi’s direct rule in August 2019.

On the other hand, India exports wheat, sugar, fruits and vegetables to several Gulf and Middle East nations.

For instance, of the 3.2 million tonnes of basmati rice that India exported between April 2021 and February 2022, 2.12 million tonnes went to Iran, Iraq, Saudi Arabia and the UAE, pointed out former Indian agriculture secretary Siraj Hussain.

“India’s relations with these countries are very deep and despite their protests … their trade relations with India are not going to suffer,” Hussain told Al Jazeera.

Similarly, with hundreds of thousands of Indians using Gulf-based airlines to fly to the US and Europe, the demands to boycott those airlines may be more political posturing than anything else.

“The Gulf is a hub for many airlines,” said Kinjal Shah, vice president at rating agency ICRA Ltd. “That region and the airlines from there are definitely important for passengers travelling [from India] on these [US and Europe] routes,” she said.

With so much at stake, India and the Gulf countries will try to avoid a downward spiral in the relationship, said C U Bhaskar, an analyst with the Society for Policy Studies, a New Delhi think-tank.

The outcome of the protests in India will be watched by the Gulf countries, he said, adding: “All sides will proceed with caution”.