By Matt Robinson and Maxwell AdlerBloomberg

During two consecutive quarters in 2018, the company didn’t make clear that demand from crypto miners was responsible for a significant part of the increase in sales of its graphics processing units that are also used for gaming, according to a Friday statement from the U.S. Securities and Exchange Commission. Crypto mining is the process of obtaining crypto rewards in exchange for verifying transactions on distributed ledgers.

“All issuers, including those that pursue opportunities involving emerging technology, must ensure that their disclosures are timely, complete, and accurate,” Kristina Littman, head of the SEC’s crypto enforcement team, said in the statement.

A Nvidia spokesman declined to comment. The company, which is based in Santa Clara, California, agreed to the penalty without admitting or denying the regulator’s findings.

According to the SEC, Nvidia omitted the information about surging demand from crypto miners while making statements about how digital assets were affecting other business lines. 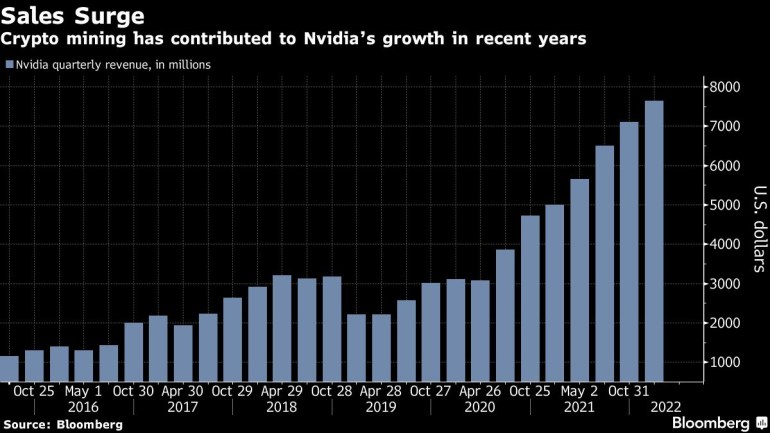 The growth of crypto mining has been a boon to Nvidia in recent years, but it’s also brought headaches.

The firm’s powerful processors designed to handle video-game graphics are considered well-suited for mining cryptocurrencies like Ethereum and Bitcoin — and it’s been hard to tell what task customers are buying the products for.

The situation has made Nvidia’s financial results less predictable.

A surge in demand for graphics chips — fueled in part by the crypto craze — led to a run-up in 2017. But that windfall was short-lived, and the following year the company slashed annual sales forecasts to below analysts’ estimates. The disappointment caused investors to dump the stock, resulting in a 20% decline over two trading days.

To address the volatility, Nvidia is now offering chips designed specifically for crypto mining. And it adjusted its graphics cards so they’re harder to use for that task.

Investors will get a fresh peek at Nvidia’s efforts to navigate the crypto industry on May 25, when the company reports its quarterly results.

–With assistance from Nick Turner.