European countries already reeling from record inflation risk aggravating their plight with the decision to shut themselves off from Russian oil imports.

While European Commission President Ursula von der Leyen promises the planned embargo will be implemented “in a way that allows us and our partners to secure alternative supply routes,” German Economy Minister Robert Habeck has warned the region’s top economy will suffer, citing possible shortages and further upward pressure on prices.

The step is seen as more manageable than disrupting flows of Russian natural gas. But an oil ban leaves the world with less supply as the U.S. and Europe face the fastest inflation in decades alongside wilting confidence because of the war in Ukraine. 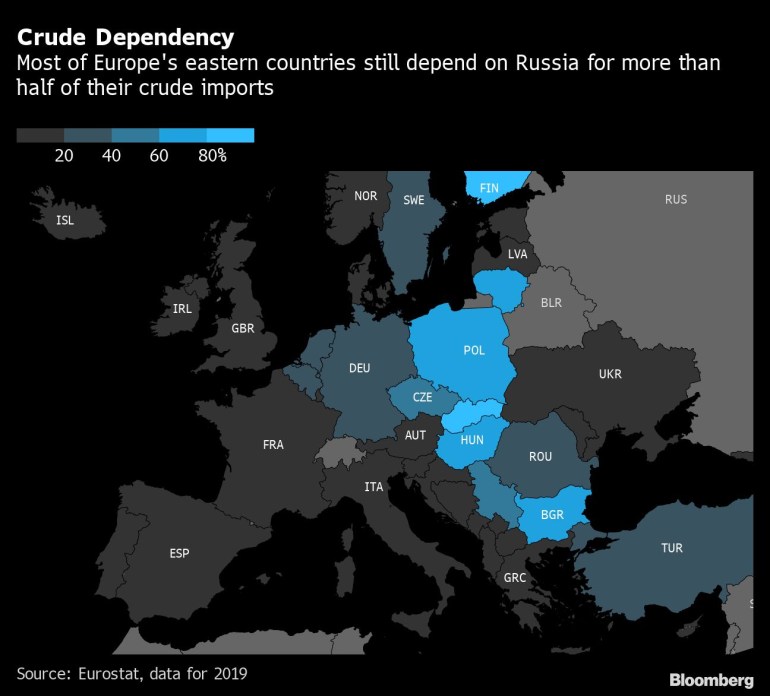 “Russian oil can be replaced on the world market in the short term, but with additional costs and logistical challenges,” German industry trade group BDI said Wednesday. “Given the oil embargo, energy prices will probably to continue to rise.”

The EU has long agonized over whether it can withstand being cut off from a top energy supplier, having received more than a quarter of its oil imports from Russia last year.

The short-term impact of the EU’s proposal should be limited because the timetable is in line with existing plans by governments to wean themselves off Russian oil, according to Klaus-Juergen Gern, an economist at the Kiel Institute for the World Economy.

Even so, markets for refined products like diesel, where Russia is an important supplier, may “become tight, and prices could increase further,” Gern said by phone. And while lockdowns in China could make it easier to find alternatives to Russia for oil — that could change if the Asian country’s economy picks up again.

JPMorgan economists Malcolm Barr and Greg Fuzesi said in a report to clients that the EU’s plans don’t change the economic outlook, cautioning that uncertainties over energy supplies remain.

The most extreme step would be a ban on Russian natural gas, which mostly flows through pipelines and is harder to replace than oil because sea deliveries from other suppliers couldn’t cover the shortfall.

The IMF reckons EU output in 2023 would be about 3% lower without Russian oil and gas imports.

For Germany, the Bundesbank says activity is at risk of shrinking nearly 2% in 2022 if an energy embargo leads to restrictions on power providers and industry. Some analysts have argued that the impact would be less severe, and that the economy would be able to handle the shock.

UBS Global Wealth Management said that while the impact of the embargo on Europe’s economic growth is likely to be “manageable,” uncertainty over supplies will probably “keep energy prices supported.”