Pakistan’s rupee is poised for its biggest monthly decline in more than two years as deteriorating finances and uncertainty over the International Monetary Fund’s bailout plan weigh on the currency.

The rupee has declined about 7% in May, the steepest drop since March 2020, as the country negotiates a bailout package with the IMF and other nations to keep its economy afloat and avert a default. Analysts expect the currency to remain under pressure even as the government took steps to meet the IMF’s demands.

Pakistan needs about $36 billion to $37 billion in financing for the fiscal year starting June, Finance Minister Miftah Ismail said last week. Morgan Stanley estimates the funding gap to be as high as $8 billion this calendar year. A bailout by the IMF has become critical as countries that have typically been generous lenders are proceeding more cautiously now.

“Pakistan’s funding requirement for the upcoming year will be met, but it’ll be pretty tight, and that will keep the rupee under pressure,” said Saad Khan, head of research at IGI Securities Ltd. in Karachi. 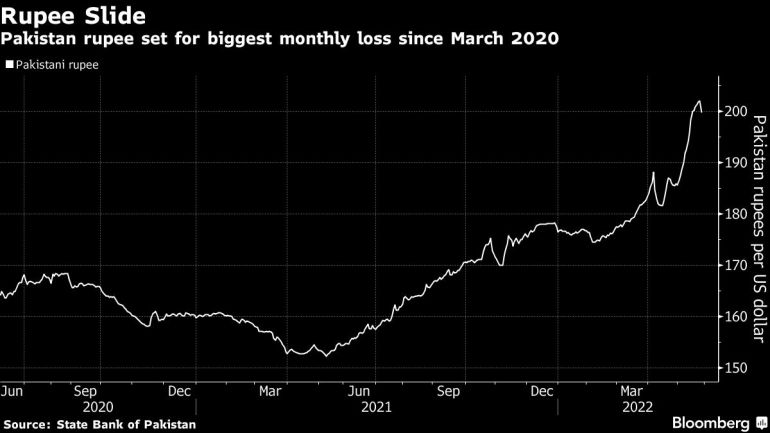 IGI and Ismail Iqbal Securities Pvt. predict the rupee will decline to 220 per dollar by the end of the year. It closed at 199.06 per dollar on Monday.

Pakistan is seeking to secure a staff-level agreement with the fund in June to unlock the remaining $3 billion from its loan program. It has also requested to increase the loan size by $2 billion. It faces $3.2 billion in dollar debt due this year, the highest amount in the next decade, data compiled by Bloomberg show.

“The currency could start to stabilize over the near-term with risk-on sentiment, but we still expect it to weaken over the longer-term,” said Raphael Mok, head of Asia country risk at Fitch Solutions in Singapore. “Pakistan is still running a significant current-account deficit, and will remain dependent on external financing conditions.”