US inflation-adjusted consumer spending rose in April by the most in three months, indicating households were holding up in the face of persistent price pressures by dipping into savings.

The personal consumption expenditures price index, which the Federal Reserve uses for its inflation target, rose 0.2% from a month earlier and was up 6.3% from April 2021. The core PCE price index climbed 0.3% for a third month. 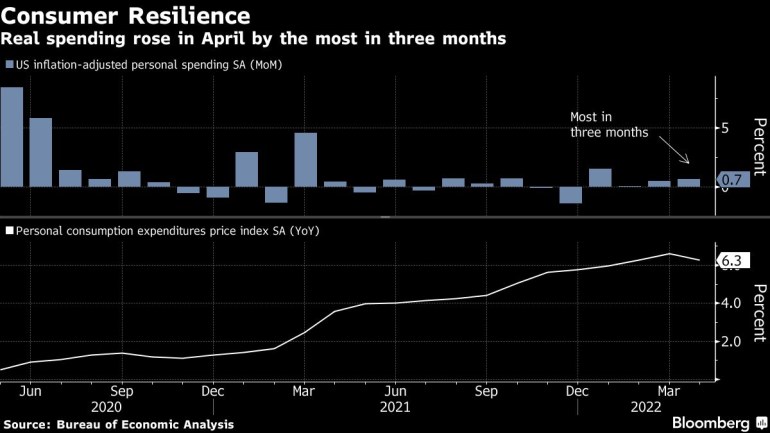 The median forecasts in a Bloomberg survey of economists called for a 0.7% increase in inflation-adjusted spending from the prior month and a 6.2% rise in the price index from April 2021.

Unadjusted for inflation, spending rose 0.9% from the prior month, while personal income climbed 0.4%.

The figures underscore forecasts for spending to stay healthy during the second quarter as consumers remain backstopped by solid job growth and accumulated savings. The deceleration in inflation during the month partly reflected a drop in gasoline prices.

While annual inflation is cooling, it remains three times higher than the Fed’s 2% target and helps explain why policy makers are seen pressing on with half-point hikes in interest rates in coming meetings.

Household purchases are nonetheless at risk of moderating as gas prices are now back at record highs and grocery bills take a bigger toll on budgets. The strain was evident in a drop in the April savings rate to the lowest level since 2008, as well as a pickup in consumer borrowing.

“Having a steady paycheck is key and the still-tight job market assures that support,” said Jennifer Lee, senior economist at BMO Capital Markets. “But high inflation is eating away at what one can buy, hence, the saving rate was drawn down for the fourth straight month.”

In addition to the headline inflation figure, the core PCE price index, which excludes food and energy and is often seen as a more reliable guide to underlying inflation, increased 4.9% from a year earlier, compared with 5.2% in March.

Inflation-adjusted spending on goods 1% from the prior month, led by motor vehicles, while services increased 0.5%. Not adjusted for inflation, the gain in services spending in April was led by components including food services, accommodation and housing, according to the Commerce Department.

–With assistance from Kristy Scheuble.