Ninh Thuan, Vietnam – For up to 12 days every month, Tran Nhu Anh Kiet, a supermarket manager in Vietnam’s Ninh Thuan province, is forced to turn off his solar panels during the most lucrative peak sunshine hours.

“I’m losing on average 40 percent of output,” Kiet told Al Jazeera, referring to the solar panels he installed on the roof of his store so he could sell power to the national grid.

If Kiet did not shut them off of his own accord, the state power company would “come and disconnect them instead”.

Across southern Vietnam and the Central Highlands, authorities are asking small-scale energy producers like Kiet and industrial solar farms alike to limit their operations due to infrastructure limitations.

After an unprecedented boom in renewable energy investment in recent years, the transmission lines that connect solar and wind projects to the national grid lack the capacity to deal with spikes in supply.

Policymakers have not been able to keep up either, leaving regulatory gaps that prevent some investors from monetising the power they harness.

“A [transmission] line takes three years to build, and a wind farm one year to build,” Minh Ha Duong, a clean energy expert, told Al Jazeera. “So lines need to be planned years in advance. This was not possible since in 2018 nobody knew for certain where they would be needed.”

Between 2017 and late 2021, Vietnam offered 20-year contracts to buy electricity from new solar and wind power projects at fixed rates, a common policy used around the world to encourage investment in renewable energy known as feed-in tariff (FIT). At more than $70 per megawatt-hour (MWh), the rates far exceeded what other Southeast Asian countries were offering at the time. The rooftop FIT in Thailand in 2019, for example, was only about $57 per MWh.

“The reason for this policy was to avoid the risk of electricity shortages,” Duong said. “Because the coal and gas power plants we planned to build were not [concluded] on time.”

BIM Energy is among the major Vietnamese investors that jumped on the bandwagon, citing attractive FIT rates and Vietnam’s prior commitment to increase renewable energy’s share in the energy mix from 6 percent in 2016 to 10 percent in 2030.

The coordinated effort enabled the Hanoi-headquartered company to finish 500MW worth of solar and wind farms in time to enjoy favourable FIT rates.

Major government support schemes have included income tax and land lease exemptions. The public’s increasing concern over air pollution caused by coal has also meant that support for clean energy has been on the rise.

In 2019, Vietnam overtook Thailand as the country with the largest installed capacity for solar and wind power in Southeast Asia. By the following year, the country’s total solar power capacity reached 16,500MW, far surpassing the government’s target of 850MW.

Kiet, who hails from the coastal province, experienced the boom firsthand.

Sensing the opportunities offered by falling solar panel prices and government incentives, Kiet in 2019 co-founded Viet Sun, one of about 100 companies that sprung up in Ninh Thuan at the time to install rooftop solar panels. With just 14 staff members, Viet Sun has had more than 300 clients to date, ranging from farmers to his former high school teacher.

As with every boom, the bust soon followed.

During the rollout of its latest FIT which ended in 2020, the government capped solar power eligible for the rate in Ninh Thuan at 2,000MW.

Despite state power employees going door to door towards the end of 2020 telling villagers not to invest any more, installations continued.

With no follow-up pricing mechanism, some solar investors have not been able to sell all the power they generate.

Trung Nam Group’s solar farm Thuan Nam, the largest such facility in Southeast Asia, is among them.

Even though it became operational in October 2020, in time to be eligible for the FIT rate at $.0935 per kilowatt-hour, the farm has not been able to sell 40 percent of its 450MW capacity because Ninh Thuan’s total solar power generation has well exceeded the government’s 2,000MW cap. On top of that, like other investments in southern Vietnam, the project has been facing curtailments due to the limited capacity of transmission lines.

“This is extremely wasteful for the company, and a waste of national resources,” Trung Nam Group told Al Jazeera in a statement. “Our revenue sources have hence experienced difficulties, seriously affecting our ability to balance the books and arrange capital as well as Trung Nam’s reputation in the eyes of our financial partners.”

Last year was particularly difficult for Vietnam’s renewable energy investors. Business closures during COVID-19 lockdowns reduced demand for power, forcing widespread curtailments. In September, about 40 solar investors in Gia Lai province, Central Highlands threatened the government with a lawsuit after they were forced to repeatedly cut supply, putting them in financial difficulty.

“It has affected my ability to pay back debts.”

Uncertainties over curtailments and post-FIT pricing have been plaguing wind power investors, too. Many experienced significant delays in construction, unable to fly in experts and ship wind turbines on time due to global supply chain bottlenecks and travel restrictions in place throughout 2021. As a result, 62 wind power projects missed the October deadline for the wind power FIT.

To date, the government has yet to issue a replacement pricing policy, leaving wind and solar power projects that finished construction after the expiration of their respective FITs unable to sell electricity.

“The wind power companies that have missed the FIT deadline are anxiously awaiting a new mechanism, because they’d already invested money into the project,” Bui Vinh Thang, country manager for the Global Wind Energy Council, told Al Jazeera. “We need a new policy with a clear roadmap.”

But despite the risks, Vietnam’s market for renewables, especially wind, remains attractive and profitable in the eyes of many investors, according to Thang. 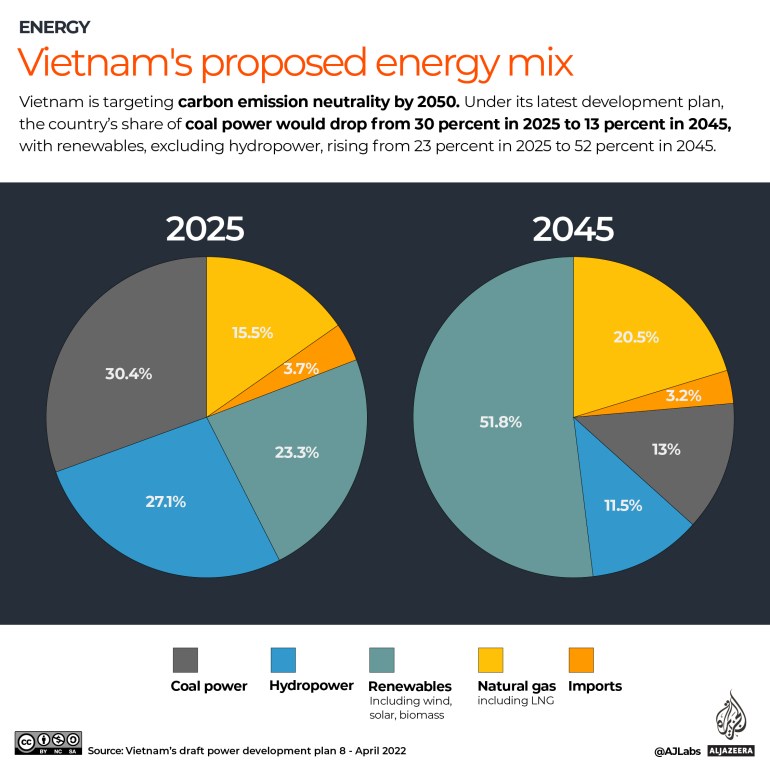 In the meantime, eyes are also on the potential for a green post-pandemic recovery that would keep Vietnam’s boom in renewable energy going.

In January, the World Bank urged Vietnam to launch competitive bidding programmes for renewable energy in lieu of the expired FITs while also modernising the national grid and introducing energy storage systems.

Investors are already taking action. Trung Nam Group is the first private entity to have built a transmission line, which traditionally has been an exclusive domain of the state. Meanwhile, smaller players like Kiet are looking into the option of offering affordable batteries for rooftop solar panels.

“We have a paradox that now there’s an excess supply of electricity from renewable sources, yet we have to import power from China,” Kiet said. “It’s such a waste of solar investment thus far.”

This story was produced with support from Internews’ Earth Journalism Network