Indian rupee tumbled to a record, while stocks retreated amid growing worries that accelerating inflation may force the central bank to tighten rates more aggressively.

The rupee dropped as much as 0.5% to 77.6313 per dollar on Thursday, hitting a new low for the second time this week before paring losses on possible central bank intervention. The benchmark Sensex Index tumbled 1.8% to the lowest in two months. 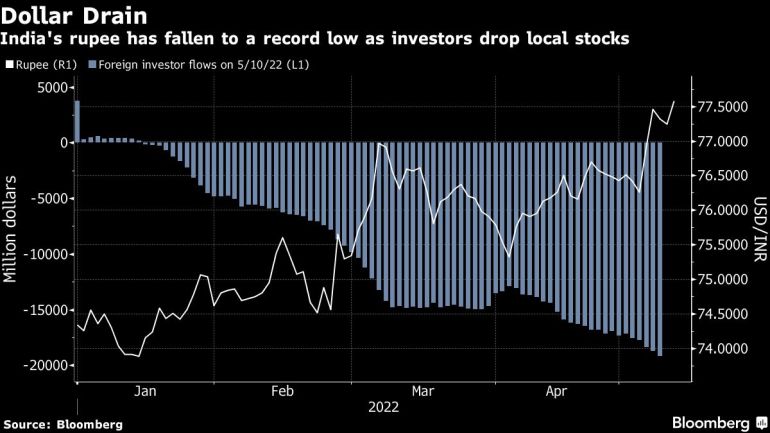 Investors are worried that inflation staying above the central bank’s upper tolerance band of 6% for the fourth-straight month may nudge it to continue hiking rates. The RBI will raise its inflation forecast in the June monetary policy meeting, possibly setting the stage for more interest rate increases by August, a person familiar with the matter said.

“Sentiment is low, the stock market is low, and every day you see red,” said Anoop Verma, a fixed income trader at DCB Bank Ltd. “The biggest barometer for the economy is the currency’s strength, and if that keeps weakening every day, it’s not a good sign for any market.”

The yield on benchmark 10-year bonds fell one basis point to 7.20% after climbing as much as seven basis points earlier in the day. Bonds had pared earlier losses on Thursday amid a rally in US Treasuries and covering of short positions by some traders, said Naveen Singh, head of trading at ICICI Securities Primary Dealership. The yields had increased to the highest since April 2019 on Monday after the central bank raised interest rates in an out-of-cycle move last week.