Coinbase Global Inc. shares and bonds fell to new lows Wednesday, signaling investor skepticism about the prospects of the crypto exchange in a bear-market.

Coinbase is “unlikely to return to recent levels of profitability in the near term absent a significant increase in crypto prices or volatility,” Will Nance, an analyst at Goldman Sachs Group Inc. wrote in a note. “We believe COIN’s stock will struggle to outperform in the near term.” 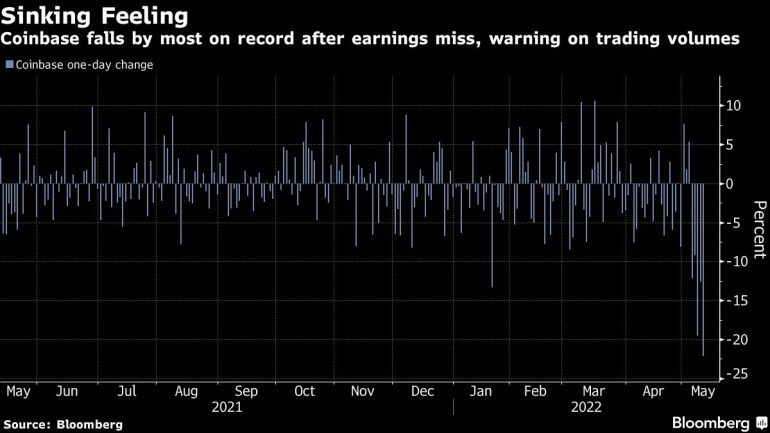 The company reported lower-than-expected revenues yesterday, and warned trading volume and monthly transacting users in the second quarter is expected to be lower than in the first. A new risk disclosure in its filing triggered concerns among some users about the safety of their crypto assets held in custody by the company in the event of a bankruptcy.

Brian Armstrong, Coinbase’s chief executive officer, took to Twitter to clarify that there is “no risk of bankruptcy” and users’ funds are safe, while apologizing for not communicating proactively about the disclosure.

1/ There is some noise about a disclosure we made in our 10Q today about how we hold crypto assets. Tl;dr: Your funds are safe at Coinbase, just as they’ve always been.

Bitcoin fell below $30,000 and touched its lowest level since June, while the TerraUSD stablecoin continued its downward spiral. Coinbase Chief Financial Officer Alesia Haas said yesterday that the company sees “bear-market conditions” but can still afford to make 2022 “an investment year.”

–With assistance from Claire Boston, Matt Turner and Olga Kharif.