New Delhi, India–The Reserve Bank of India (RBI) stands apart as a rare example of a central bank today that has shunned interest rate hikes in the post-pandemic era and remained open to rate cuts, despite rising inflation.

As the RBI’s monetary policy committee (MPC) meets from April 6-8 to decide its latest interest rate policy, official documents reviewed by The Reporters’ Collective (TRC) and Al Jazeera show the RBI has so far kept interest rates low by exploiting what the Ministry of Finance treats as a built-in “escape clause” in the monetary policy, which permits inflation to rise above the mandated target of 4 percent.

In the process, the federal government has been able to borrow much-needed funds from the markets at lower costs since the RBI is also tasked with managing the sovereign debt.

TRC obtained the documents, part of a trove that forms the basis of a three-part investigative series into the Modi government’s influence over the central bank, under the Right to Information Act. (See Part 1 & Part 2.)

At its December 2021 meeting, the RBI’s MPC kept interest rates unchanged, saying the economic recovery needed “sustained policy support” and that it would “wait for growth signals to become solidly entrenched while remaining watchful on inflation dynamics”. In February 2022, the RBI surprised observers by again declining to change its monetary policy stance, citing “uncertainties related to Omicron and global spillovers” and a manageable inflation outlook.

The decisions have triggered debate among policy analysts, some of whom took it as evidence of the RBI giving greater priority to its other objectives of growth and public debt management. Since the RBI borrows for the government, lower interest rates help the government raise money at lower rates from the market.

Das, in his public statements, has justified the MPC’s decisions by maintaining that the central bank is prioritising economic growth.

“While on the face of it the RBI says that growth is a priority, we feel it’s primarily their debt management responsibility that has prevented them from increasing the interest rates,” says Radhika Pandey, a senior fellow at the National Institute of Public Finance and Policy (NIPFP).

“The RBI should have at least acknowledged that inflation is getting entrenched,” she adds. Pandey is among those who worked closely with the finance ministry to help draft India’s inflation-targeting monetary policy framework.

Amid spiking inflation worldwide, central banks are winding down easy money policies. The Bank of England recently raised interest rates for the third time in a row, while the US Federal Reserve in March carried out the first of six planned rate hikes for this year. Even the emerging market central banks in Brazil, Mexico, South Africa, Chile, Russia, to name a few, have started increasing rates, keeping price stability as their priority.

But not India, where the inflation rate has been on the rise for five consecutive months, even before the Russia-Ukraine war. The inflation rate reached 6.1 percent in January 2022 and 6.07 percent the following month. And prices are expected to continue to rise. Japanese brokerage firm Nomura Holdings Inc projects that inflation will reach 6.2 percent in the financial year that started this April, well above the RBI’s projections of 4.5 percent, due to higher fuel prices, rising farm input costs and commodity prices. Analysts expect the RBI to change its inflation forecast in the upcoming monetary policy meeting. 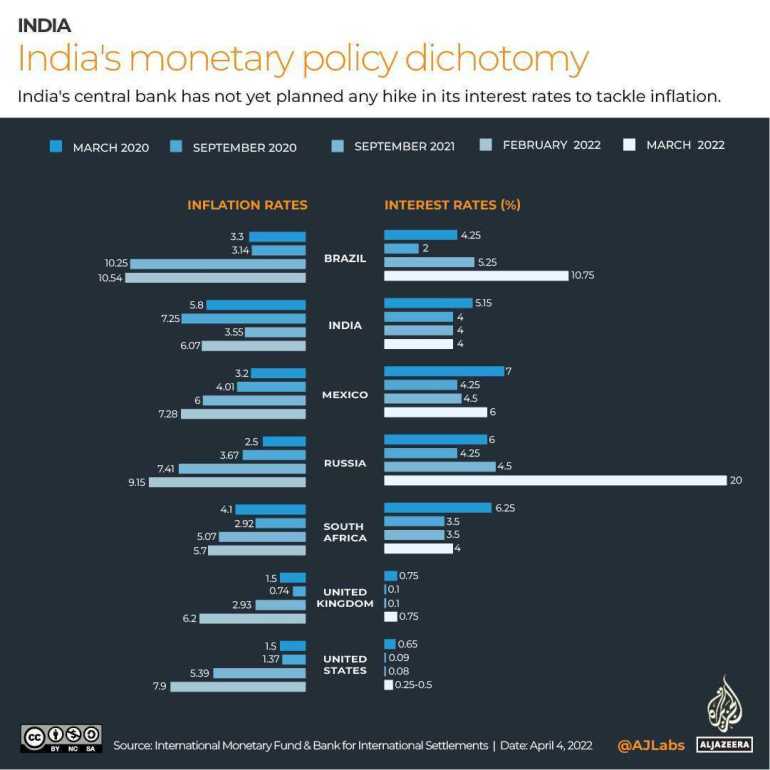 While embarking on a new monetary policy regime to target inflation in 2015, policymakers had suggested debt management be hived off to a separate entity to avoid a conflict of interest in the RBI’s policy objectives.

“In light of international experience and recommendations of expert committees, it is evident that there is an inherent conflict between monetary policy and debt management functions,” then-Principal Economic Adviser Ila Patnaik said in an internal note dated February 11, 2015, which was seen by TRC and Al Jazeera. “Therefore, monetary policy objectives should not be included in the RBI Act until the public debt management function is carved out from the RBI Act.”

The Indian government tried to address this anomaly by proposing changes to the law to establish a debt management agency and transfer oversight of the government bond market from the RBI to the capital market regulator, the Securities & Exchange Board of India (SEBI). But it withdrew the proposal after the RBI objected to giving up its debt management role.

The NIPFP’s Pandey said the multiple objectives that the RBI is saddled with, especially managing sovereign debt, do not bode well for the economy and “if inflation is not anchored at this point of time, inflationary expectations will get entrenched and it will be difficult to control prices”.

However, Jayanth R Varma, an external member of the MPC, said debt management is not a factor in deciding interest rates and there is no conflict of interest as half of the committee members are outside experts.

“I would like to assume that senior functionaries of the RBI who sit on the MPC have the intellectual integrity and epistemological dexterity to keep their MPC role separate from their RBI roles, and that they would vote in the MPC solely on the basis of the statutory mandate entrusted to the MPC,” Varma said. “Moreover, half of the MPC consists of independent external members who are not conflicted in this manner.” (His full response is here.)

The Ministry of Finance and the RBI did not respond to a list of questions from Al Jazeera.

At a customary meeting with reporters following the monetary policy announcement on December 8, 2021, a journalist asked Governor Das a straightforward, yet crucial, question: “What should be the priority for India’s central bank, growth or inflation?”

Das is well-versed in arguments against uncontrolled inflation. Back in 2016, Das, as the economic affairs secretary, was involved in drafting the cabinet note laying down the monetary policy goals. The cabinet note reads: “The foremost and the dominant objective of monetary policy must be to anchor inflation expectations and to address deviations from desirable levels of inflation.”

Indian law states that “the primary objective of the monetary policy is to maintain price stability while keeping in mind the objective of growth”. However, since taking over in 2018, Das has stressed time and again that supporting economic growth is equally or more important than price stability for the central bank, even when the economy is back on the recovery path, like it is now, but inflation rates continue to rise. 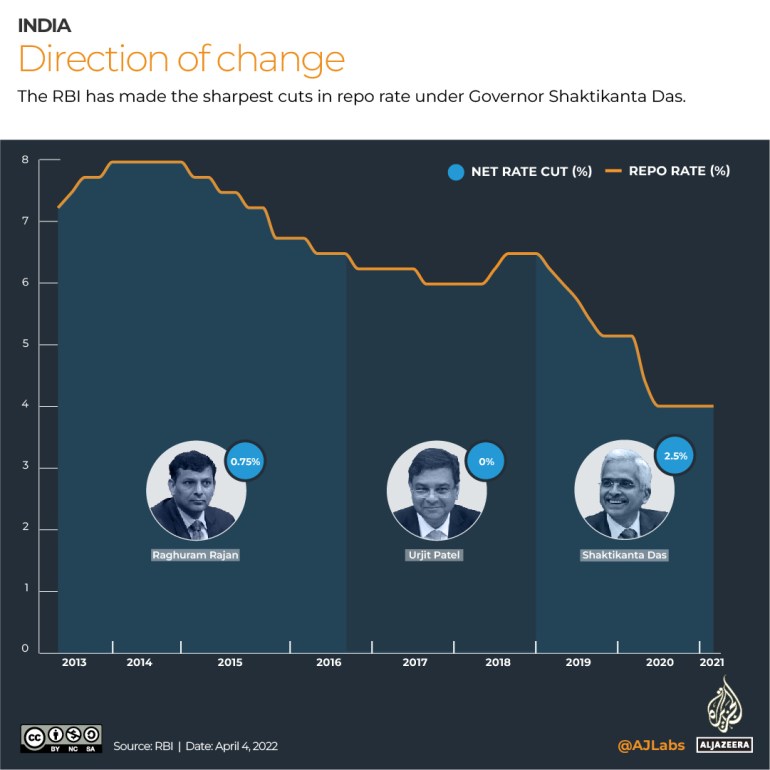 Under Das, the MPC began pumping money into the economy with five successive sharp interest rate cuts in 2019. In total, the RBI reduced the repo rate – the rate at which banks borrow from the RBI – by a record 135 basis points (100 basis points equals 1 percentage point) between February 2019 and February 2020. With the onset of the pandemic, Das signalled a continuation of loose policy by announcing the central bank would do “whatever is necessary” to support growth. The RBI cut interest rates by 115 basis points in 2020 to an all-time low of 4 percent, despite high levels of inflation. 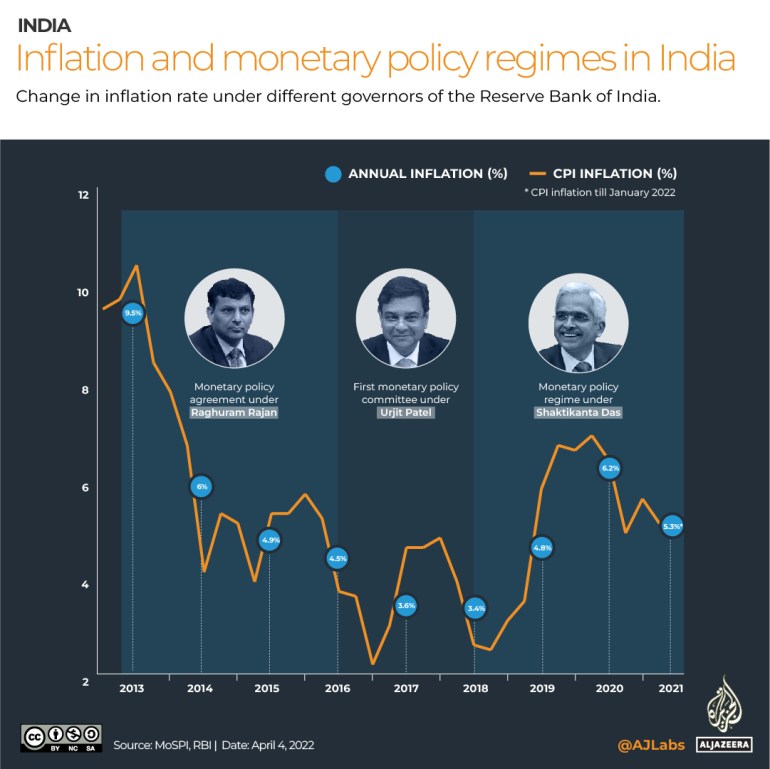 One of the key reasons for the different approach that Das has adopted is the difference in interpreting the objectives of the monetary policy enshrined in the law, experts say.

Willem H Buiter, adjunct professor of international and public affairs at Columbia University, said the RBI under Das has either “de facto changed its objective function to one that gives greater weight to real economic activity than to price stability, or it is underestimating the severity and persistence of the inflation challenge it faces”.

Despite inflation dropping in most parts of the world when the pandemic hit, India’s price growth remained high – averaging 6.2 percent for the financial year April 2020 to March 2021 – fuelled by supply-side bottlenecks and the government’s move to tax fuel.

In all the MPC meetings held since the pandemic, the central bank has said it will “continue with the accommodative stance as long as it is necessary to revive and sustain growth on a durable basis” and mitigate the effect of COVID-19 on the economy “while ensuring that inflation remains within the target”. An accommodative stance indicates that the central bank will remain open to interest rate cuts.

This is despite the inflation rate being on the rise since October as the economy continues to rebound from the pandemic.

Not all members of the MPC are comfortable with this stance.

Varma, who joined the MPC in August 2020, has objected to the RBI making economic growth the paramount concern.

“By creating the erroneous perception that the MPC is no longer concerned about inflation and is focussed exclusively on growth, the MPC may be inadvertently aggravating the risk that inflationary expectations will be disanchored,” Varma said during the committee’s August 2021 meeting, according to minutes of the gathering.

Varma has dissented from the RBI’s accommodative stance since then, making the case that the MPC must demonstrate its commitment to the inflation target with “tangible action”, which will help in sustaining lower interest rates for longer, “thereby aiding the economic recovery”.

Back in 2016, when it was setting the inflation target the government, after consulting with the RBI, its former governors and several expert committees, decided that if prices rose at 4 percent, it would actually let the economy grow at its most efficient pace. Anything higher than that would immediately hit the wallets of common Indians.

“A target of 4 percent +/(-) 2 percent would give sufficient flexibility to RBI. In any case, a CPI inflation of more than 6 percent (4 percent + 2 percent) would be unacceptable,” Das wrote in a finance ministry file in July 2016.

While discussing the inflation targets in March 2021 for the next five years, the finance ministry delved into whether there should be an escape clause in special circumstances, documents reviewed by TRC and Al Jazeera show. The Czech Republic and Romania have official escape clauses to allow their central banks to shelve their inflation target in the case of an economic shock.

The finance ministry came to the conclusion that, though not written in the law, India’s inflation target already operated similarly to those of central banks with such a clause as it allowed for a range of figures, “operationally very similar to point target with escape clauses”. Most countries have a range but usually set it closer to their inflation target. India and Turkey are the only two countries where the range is as high as 2 percent in either direction.

Moreover, unlike most countries where if the inflation target is missed even for a month it is considered a technical failure of the central bank, India permits the target to be missed for three consecutive quarters before qualifying it as a “failure”. These two monetary policy features “could be construed as equivalent to” having a flexible regime with an escape clause, according to a finance ministry note dated February 25, 2021.

Inflation has hovered just over the central bank target of 4 percent in only five out of 22 months from November 2019 to February 2022. It is expected to shoot up further in the coming months due to rising commodity and oil prices because of the Russia-Ukraine conflict.

In late March, Das said the 6 percent-plus inflation of recent months was “temporary” and defended the central bank’s move to not tighten its monetary policy stance by arguing that “a premature demand compression” would be counterproductive.

Columbia’s Buiter, however, said such an outlook was mistaken.

“It is time to recognise that this inflation is not transitory or temporary, that it is not driven by short-live supply shocks and increases in global fossil fuel prices that are unlikely to be repeated,” he said. Moreover, if the RBI is serious about its medium-term inflation target of 4 percent, “it should be raising its policy rates now”, he added.

Somesh Jha is a member of The Reporters’ Collective.