By Giles Turner and Craig TrudellBloomberg

Elon Musk took a 9.2% stake in Twitter Inc. to become the platform’s biggest shareholder, a week after hinting he might shake up the social media industry.

Twitter shares surged as much as 27% after Musk’s purchase was revealed Monday in a regulatory filing. The gain marked the stock’s biggest intraday increase since its first day of trading following the company’s 2013 initial public offering. The stake is worth about $2.89 billion, based on Friday’s market close.

Musk, 50, polled his more than 80 million followers on Twitter last month, asking them whether the company adheres to the principles of free speech. After more than 70% said no, he asked whether a new platform was needed and said he was giving serious thought to starting his own.

Free speech is essential to a functioning democracy.

Do you believe Twitter rigorously adheres to this principle?

“Given Elon’s prior comments about wanting to start a social media company, I would say it’s possible that he will increase his stake in Twitter or take a controlling interest in the company sometime soon,” said Tom Forte, an analyst at DA Davidson & Co.

Musk has been one of the biggest personalities on Twitter and has regularly run into trouble on the platform. The Tesla Inc. chief executive officer is currently seeking to exit a 2018 deal with the U.S. Securities and Exchange Commission that put controls in place related to his tweeting about the electric-car maker.

The announcement will be yet another major test for new Twitter CEO Parag Agrawal, who replaced Jack Dorsey after he unexpectedly resigned in November. Agrawal vowed to increase accountability, make decisions faster and to improve product execution. The company set ambitious goals for growth including increasing annual revenue to $7.5 billion and getting to 315 million daily users by the end of 2023.

Musk posted a cryptic meme in December after Twitter announced that Agrawal was taking over from Dorsey as Twitter’s CEO. It depicted Agrawal as Soviet dictator Joseph Stalin and Dorsey as Soviet secret police head Nikolai Yezhov being shoved into water. 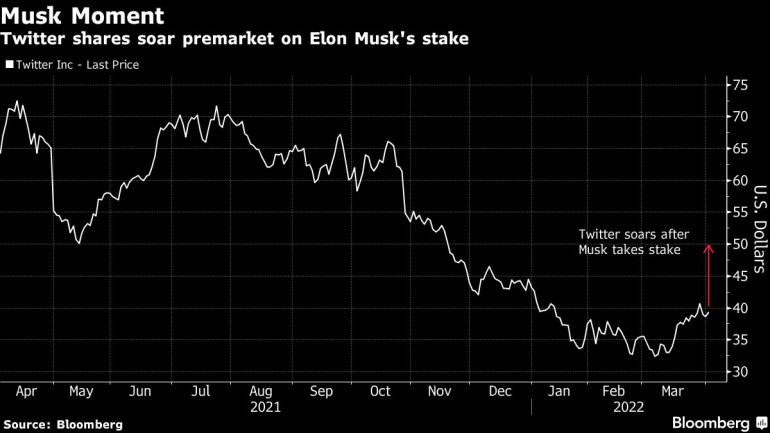 “It looks like Elon has his eyes laser set on Twitter,” said Wedbush analyst Dan Ives in a research note, adding that the stake could lead to a “more aggressive ownership role.”

Twitter is particularly vulnerable to outside pressure because unlike Google, Facebook, Amazon and Snap, the company’s founders don’t have special voting control over its future. The company has just recovered from activist pressure by Elliot Management that started in 2020 which led Dorsey, who was serving his second stint as CEO of Twitter, to set a succession plan.

It’s unclear what Musk is planning with his stake. The filing with the SEC shows that the date of the event that triggered the disclosure was March 14. The type of form used often indicates the investor isn’t seeking to acquire control of a company, or to influence who controls it.

Musk, already the world’s richest person according to the Bloomberg Billionaires Index, has made about $1.1 billion on his holding since mid March, based on the pop in Twitter’s shares in early trading Monday.

Twitter is under pressure to move faster in building new products. The company has set ambitious revenue and user growth goals to convince skeptical investors that it was serious about expanding its business. While Twitter has grown steadily for years, its stock gains have lagged behind industry peers.