Bengaluru, India – Leaning forward, arms resting on his desk, Russian President Vladimir Putin delivered a crisp message to leaders of the country’s energy sector earlier this month: they needed to plan for a decline in Western imports by shifting their focus from Europe to Asia.

From the Kremlin’s perspective, that directive makes sense. The United States, United Kingdom and Australia have already banned the import of Russian energy. And the European Union is under mounting pressure from the US and members like Poland and Lithuania to institute an embargo on Russian oil and gas in response to Moscow’s continuing war in Ukraine.

But a cocktail of infrastructure limitations, political pressure and poor economic demand could prevent Asian markets from absorbing energy supplies that would otherwise be headed to Europe if Brussels indeed bans all Russian hydrocarbons, according to analysts. Developed European nations account for almost two-thirds of Russia’s gas exports and half of its oil sales.

Most Russian pipelines are geographically built to cater to European markets and cannot supply Asia. Two of Russia’s biggest Asian customers — Japan and South Korea — are Western allies who will likely face intense pressure from the US to avoid any increase in energy imports. China, the largest importer of Russian oil, is witnessing an economic slowdown because of COVID-19 lockdowns that will only reduce its hunger for energy.

“If the EU does go ahead with a complete ban, I don’t see how Asian markets will be able to make up for that demand,” Hari Seshasayee, a global fellow at the Wilson Center, told Al Jazeera. “Russia might need to reduce its oil production by 30 percent by the end of 2022.”

For the moment, the EU does not have a “unified position” on any embargo against Russian energy, German newspaper Die Welt reported on Monday, quoting the bloc’s top diplomat, Josep Borell. Germany and Hungary are among the nations worried about a steep rise in energy costs if they stop buying Russian oil and gas.

Meanwhile, the EU is trying to devise a payment mechanism that will allow countries to both adhere to financial sector sanctions against Moscow and to the Kremlin’s diktat that European nations buy their energy in roubles.

But in the oil market, analysts think it is “a matter of time before Europe embargoes Russian crude and products,” Lydia Powell, a senior fellow at the New Delhi-headquartered Observer Research Foundation, told Al Jazeera. That could cut four million barrels per day from the global crude market, Powell said.

Aware of these risks, Moscow has been attempting to reduce its dependence on Western buyers for some years now. In 2012, Putin inaugurated the Eastern Siberia-Pacific Ocean oil pipeline, aimed at delivering crude to China and Japan. The Power of Siberia pipeline, launched in 2019, can supply up to 38 billion cubic metres of Russian gas to China. In February, during Putin’s visit to Beijing weeks before the start of the war, China and Russia announced plans for yet another gas pipeline.

But these projects only underscore the complexities involved in starting — or increasing —oil and gas trade between nations, analysts said.

“Transportation infrastructure plays an important role, and it is not developed to the same extent with Asian markets as it is with Europe,” Filip Medunic, a sanctions expert at the European Council on Foreign Relations, told Al Jazeera.

Those limitations aren’t stopping Moscow from offering oil at subsidised prices, and India, the world’s third-largest oil guzzler, appears to be biting: It increased its Russian oil imports in March. Russian and Indian officials also met last week to try to overcome an impasse over the shipping of coking coal to Indian steelmakers, which has declined since March over payment and logistics complications, Reuters reported on Monday, citing a trade source and Indian government source. 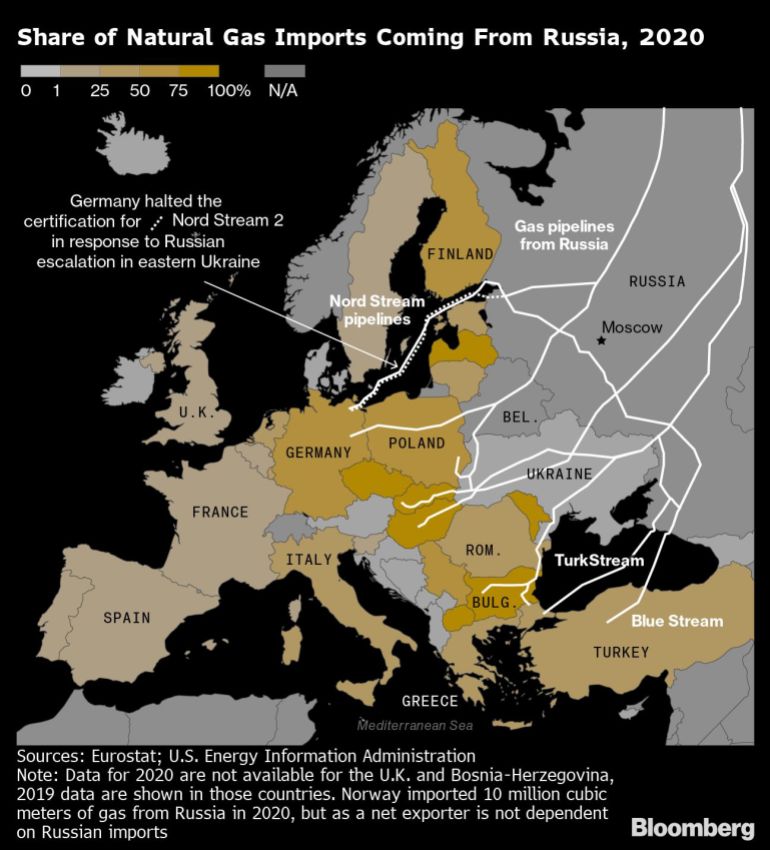 Even so, crude from Russia constituted only 1.4 percent of India’s oil imports in 2020, meaning that a spike will not help Putin much. Moreover, different countries produce crude of different densities, and it will not be easy for India’s older public sector refineries to switch from the Middle Eastern, American and Latin American oil they currently work with, Powell said. Some private refineries might also be hesitant to alienate Western customers by using Russian crude, she added.

At a time when India is strengthening ties with the US and the EU, an increase in energy purchases from Russia could damage those relationships, Niklas Swanström, director of the Stockholm-based Institute for Security and Development Policy, told Al Jazeera.

South Korea and Japan, among Russia’s top 10 oil purchasers, would face even harsher censure from the US — their principal security provider — if they were to try and soak up more crude, experts said.

Seoul has a new pro-American leader in President-elect Yoon Suk-yeol, making it even less likely that it would risk taking on Washington, Troy Stangarone, senior director at the Korea Economic Institute of America, told Al Jazeera.

Then there is China. The world’s largest oil importer purchased a third of all Russian oil in 2020. But the country has its own limitations, according to Wang Huiyao, president and founder of the Beijing-based Center for China & Globalization.

China’s dependence on crude imports means Beijing needs to maintain good relations with all of its major suppliers, Wang said, and wouldn’t want to jeopardise those by reducing purchases from some nations to accommodate extra Russian oil. An indefinite lockdown in Shanghai and mounting COVID-19 cases in Beijing are also putting the brakes on the country’s economic recovery. “There’s no demand in China for even more oil,” Wang told Al Jazeera.

Even if the EU imposes a strict embargo, Russia’s energy sector is unlikely to collapse entirely. Belarus is Russia’s ninth-largest oil buyer. Like China, it is a strategic partner and unlikely to join any measures against Moscow.

China, Japan, India and Vietnam also have investments in Russia’s fossil fuels sector and have not signalled any plans to pull out. Oil and gas fields have life spans of up to three decades, so companies can afford to wait out crises — Chevron, for instance, retains its investments in Venezuela despite US sanctions against Caracas.

This, in turn, will incentivize countries and their firms with stakes in Russian fields to keep oil and gas flowing from them, said Seshasayee, the Wilson Center fellow.

Still, the economic hurt will be deep if Russia loses the market responsible for most of its oil and gas exports, which contribute 45 percent of the national budget, said experts. Taking such a bold step will not be easy for Brussels, but it may just be a matter of time before one side decides to completely pull the plug on their soured relationship.

“Europe and Russia will both try to become independent of the other first,” said Medunic, the European Council on Foreign Relations analyst.