The German economy is at risk of shrinking nearly 2% this year if the war in Ukraine escalates and an embargo on Russian coal, oil and gas leads to restrictions on power providers and industry, according to the Bundesbank.

The estimate translates into a hit to output of about 5 percentage points compared to a March baseline, Germany’s central bank said in its monthly report.

While losses in the following years should be somewhat smaller, particularly if Russian energy deliveries are gradually substituted and rationing effects ease, activity in 2024 would still be significantly below previously forecast levels. 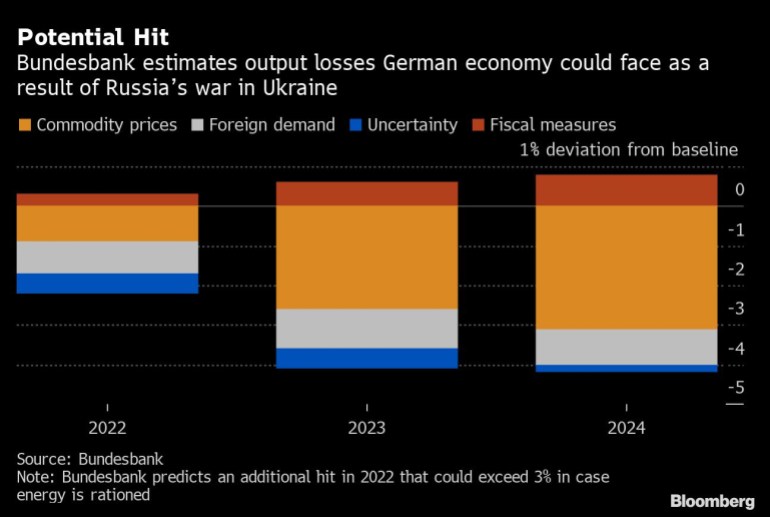 Economists have struggled in the past weeks to come up with estimates of the economic fallout of the war for Europe. Risks are high that Russian’s escalation of its attack on Ukraine will trigger aggravated sanctions and counter-sanctions, with a complete ban on energy having the biggest impact on growth.

Research institutes advising the German government said last week that such a step would cost Europe’s largest economy some 220 billion-euro ($239 billion), the equivalent of 6.5% of annual output, over the next two years.

The Bundesbank calculates that losses amount to 165 billion euros this year and 115 billion euros in each of the following ones. Only the 2022 forecast includes rationing effects.

The central bank estimates that the worst damages will come from higher commodity costs. It said the findings of its two main models complement each other in the short term so that their findings can be added up to show the war’s full impact. 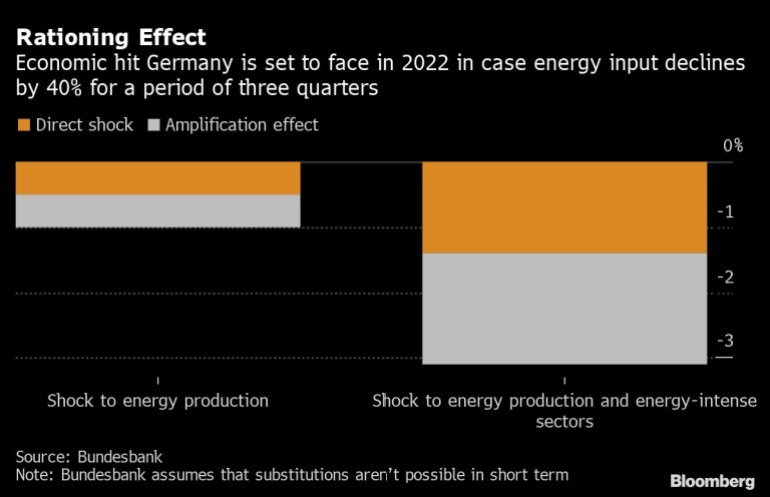 These models assume that fighting will intensify but remain contained to Ukraine. They also include an embargo on fossil fuels, a surge in Brent crude above $170 a barrel, strong increases in the cost of coal and gas and moderate ones for non-energy commodities. Prices are seen peaking this spring.

While the import ban is assumed to remain in place through 2024, the Bundesbank does consider shifts in supply and demand across the world. It said consequences of any financial-market disruptions aren’t included, and that fiscal stimulus could be significantly stronger than currently anticipated if the crisis intensifies.

The German central bank predicts output in the euro area will be some 1 3/4% weaker this year than the European Central Bank’s 3.7% forecast in March. Next year’s hit should be similar, before the damping effects of the war ease in 2024.

Unlike the ECB, the Bundesbank doesn’t publish quarterly projections.

Since then, price pressures have intensified while economic momentum has weakened.

The Bundesbank said the German economy “more or less stagnated” in the first quarter, adding that the economic implications of the war in Ukraine are uncertain and depend on how the situation evolves.