U.S. stocks slid as the selloff in Treasuries resumed, with traders bracing for the possibility of more aggressive policy tightening by the Federal Reserve. The dollar gained.

The S&P 500 dropped 1.5% in a dramatic reversal of a more than 1% rally in early trading Thursday on the back of upbeat earnings. The tech-heavy Nasdaq 100 fell about 2%, underperforming than main benchmarks, as the jump in yields weighed on growth-related stocks.

Treasury yields rose across the curve, with the policy-sensitive two-year rate climbing as much as 15 basis points 2.73% as traders priced in 50 basis-point rate hikes at each of the next three meetings. The dollar gained against all of its major peers following the surge in yields.

Fed Chair Jerome Powell said he saw merit in the argument for front-loading interest-rate increases and that a half-point hike “will be on the table for the May meeting.” He declined to comment on market pricing but noted minutes of the March meeting showed that many officials backed one or more half-point hikes. 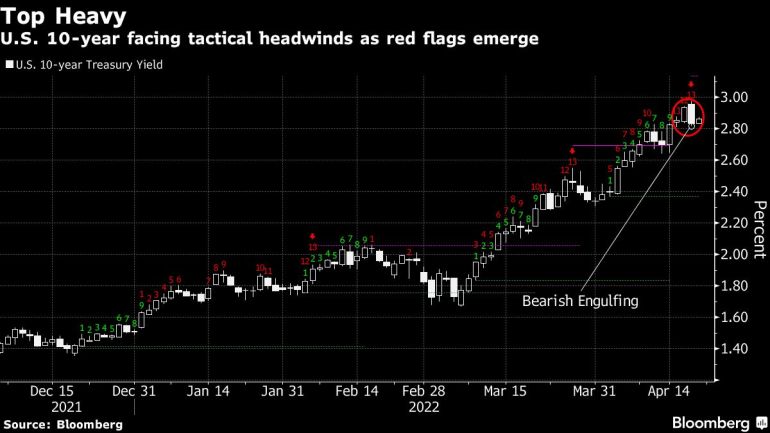 On the earnings front, Tesla Inc. gained after posting record profits that blew past estimates and with Elon Musk predicting output will grow at a fast clip for the rest of the year. The stock rose 3.2% on the day, after rising as much as 12% in early trading.

While inflation and central-bank reactions to the spike in rising prices are big drivers of markets right now, earnings have been important this week too, especially after Netflix Inc.’s selloff, Chris Gaffney, president of world markets at TIAA Bank, noted.

“On the flip-side, we get Tesla this morning and it’s rallying back up on their profits,” Gaffney said by phone. “American Airlines released — so travel and leisure, even with higher gas prices, they’ve been able to raise their ticket prices. So far, it looks like consumers are shrugging off the price increases, but everybody is complaining about it. We’ll see how long that lasts.”

While it’s early in the U.S. earnings-reporting season, the signs are encouraging so far. Of the 87 S&P 500 companies that have posted results, about 80% have beaten estimates, according to Bloomberg data.

U.S. jobless claims eased last week to a level that’s consistent with an exceptionally tight labor market, Labor Department data showed Thursday. Initial unemployment claims decreased by 2,000 to 184,000 in the week ended April 16, while continuing claims for state benefits dropped to 1.42 million in the week ended April 9, the lowest since 1970.

Will value stocks finally outperform growth peers? What will be the best-performing EM stock market for the rest of 2022? “Rotations” is the theme of this week’s MLIV Pulse survey. Participation takes one minute and is anonymous, so please click here to get involved.