The report from the United States Department of Labor on Thursday also showed unemployment rolls shrinking to the lowest level in 52 years in the first week of April, reinforcing the tightening labour market conditions. An acute shortage of workers is keeping layoffs low, helping to fuel inflation, and forcing the US Federal Reserve to adopt a restrictive monetary policy stance.

“Jobless claims at near-record lows mean worker wages will continue to go up and up, guaranteeing that inflation remains more persistent and at more worrisome levels for longer than Fed officials believe,” said Christopher Rupkey, chief economist at FWDBONDS in New York.

Initial claims for state unemployment benefits declined 2,000 to a seasonally adjusted 184,000 for the week ended April 16. Data for the prior week was revised to show 1,000 more applications received than initially reported.

Economists polled by Reuters news agency had forecast 180,000 applications for the latest week. Claims plunged to a more than 53-year low of 166,000 during the week ending March 19. There is probably limited scope for further declines.

Last week, applications tumbled by 7,656 in the US state of Missouri. There were also substantial declines in Ohio, Texas, New York and Michigan, which offset increases in Connecticut and California.

The Fed in March raised its policy interest rate by 25 basis points, the first rate hike in more than three years. Economists expect a half-percentage-point rate increase next month, and for the US central bank to soon start trimming its asset holdings. 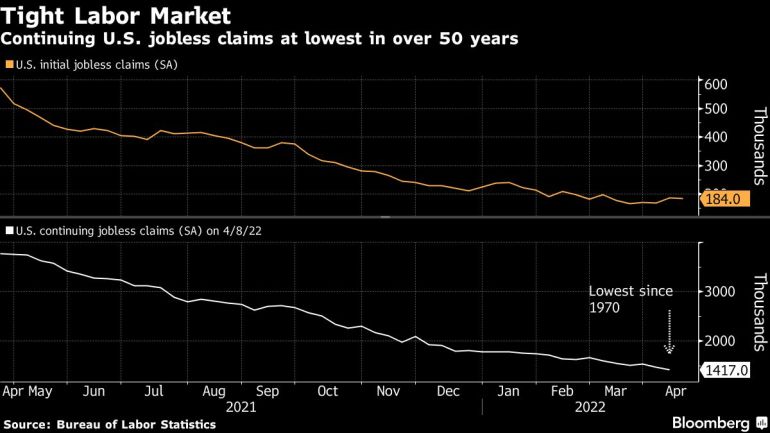 Claims, which have dropped from a record high of 6.137 million in early April 2020, will be closely watched for signs of whether rising borrowing costs are curbing demand.

So far, demand for labour is holding strong. The Fed’s Beige Book, based on information collected on or before April 11 from the central bank’s business contacts, showed on Wednesday that “demand for workers continued to be strong across most districts and industry sectors,” but noted “hiring was held back by the overall lack of available workers”.

There were a near-record 11.3 million job openings at the end of February. The unemployment rate is at 3.6 percent, just one-tenth of a percentage point above its level before the coronavirus pandemic.

But there are signs labour supply will soon improve. The claims report showed the number of people receiving benefits after an initial week of aid dropped 58,000 to 1.417 million during the week ending April 9. The was the lowest level for the so-called continuing claims since February 1970.

Economists are expecting strong employment growth in April. Payrolls increased by 431,000 jobs in March, marking the 11th straight month of employment gains in excess of 400,000.