A Sri Lankan delegation is headed to Washington next week, looking to secure up to $4 billion from the International Monetary Fund and other lenders to help the island nation pay for food and fuel imports and limit debt defaults.

The team led by newly appointed Finance Minister Ali Sabry hopes to start talks with the lender of last resort on April 18 and secure aid as early as a week after negotiations.

Sabry will be joined in the talks by central bank Governor Nandalal Weerasinghe and Treasury Secretary Mahinda Siriwardana, both of whom have had stints with the IMF.

Still, political turmoil at home, with street protests by citizens calling for the ouster of Rajapaksa only make the job of convincing the IMF to lend money more difficult. The $81 billion economy faced $8.6 billion worth of debt obligations this year before it suspended payments on foreign loans to preserve cash to pay for essential food and fuel imports.

“With all their expertise we are looking at putting up a decent case for us, which will preserve the Sri Lankan economy,” Sabry said, affirming confidence in the team he will be leading. Governor Weerasinghe replaced Ajith Nivard Cabraal, one of the strongest proponents of ending reliance on the IMF, while Secretary Siriwardana took over from Sajith Attygalle, also known for resisting aid from the multilateral lender.

Even with officials more amenable to working with the IMF in place, it will be an uphill task for Sri Lanka to raise the kind of funds Sabry said the country needs to tide over a balance of payments crisis this year.

The last time IMF extended help to Sri Lanka in 2016, the loan was capped at $1.5 billion and the program was prematurely terminated after disbursing $1.3 billion. That was when the economy was growing at about 5% and tourism accounted for a similar percent of gross domestic product.

In the absence of revenue from tourism, Sri Lanka has in recent times turned to countries including China and India for support amid a weak foreign-reserves position. The nation is also in talks with the World Bank and the Asian Development Bank for support, Sabry said.

Sri Lanka’s High Commissioner to India Milinda Moragoda met Finance Minister Nirmala Sitharaman in New Delhi to seek further help for securing food and fuel imports for the island nation, a statement from the high commission said. New Delhi has already provided a $1 billion credit facility to buy food, medicines and other essential items as well as $500 million for fuel imports, since the crisis. 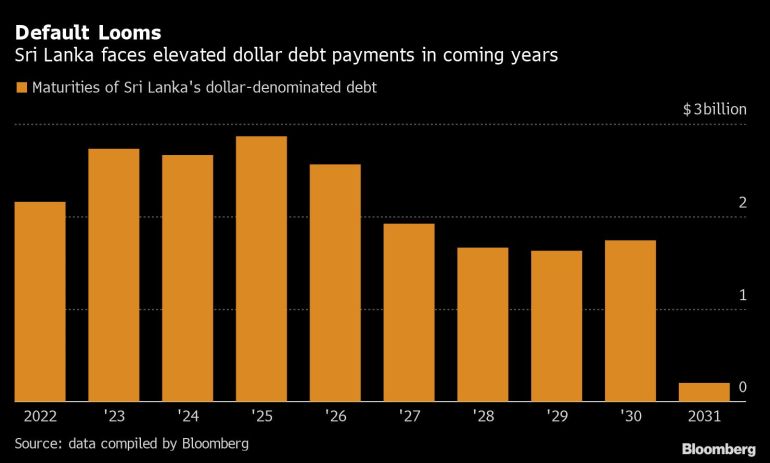 Citigroup Global Markets expects the IMF’s involvement to help negotiations with bond holders, as Sri Lanka looks to request them to take a haircut on payments owed to them. The government may ask investors to accept a loss of 50% on interest payments, and 20% on the principal, analysts Donato Guarino and Johanna Chua wrote in a note to clients.

“If you have been part of our prosperity and made money out of it, when we are not doing well, you need to take some sort of a haircut,” Sabry said. “That’s going to be a long, protracted discussion.”

The loan restructuring plan needs to be credible and one that will reduce the debt quantum to a sustainable level, said Sanjeewa Fernando, strategist at CT CLSA Securities in Colombo. He also underlined the need for fiscal reforms with a formal time line.

The authorities are also seeking to cut expenditure, including freezing hiring at government departments.

“Given that we have started discussions with the IMF, strengthening our fiscal space is key,” Siriwardana said, adding that the government will also be looking at ways to increase state revenue.

Ahead of the talks, Sri Lanka has raised interest rates, devalued the local currency and placed curbs on non-essential imports. Its Prime Minister also called on citizens to be patient as prices surge and shortages of food to fuel to medicines worsen.

The IMF has said it is “monitoring the political and economic developments very closely,” and is “very concerned” about the hardships suffered by the people, especially the poor and vulnerable.