The U.S. added close to half a million jobs in March and the unemployment rate fell by more than expected, highlighting a robust labor market that’s likely to support aggressive Federal Reserve tightening in the coming months. 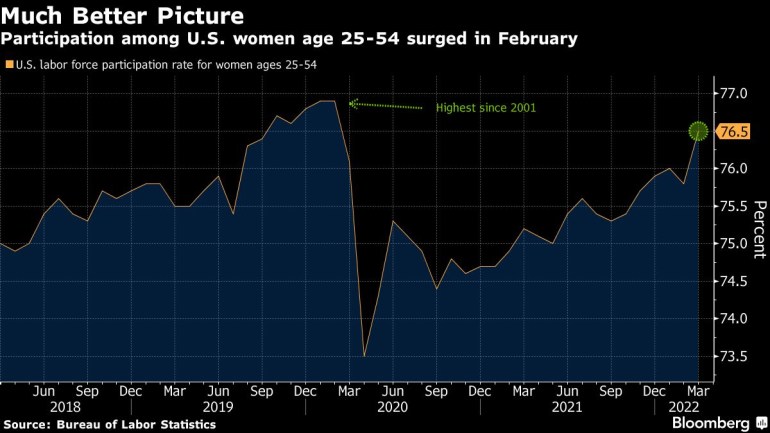 The median estimate in a Bloomberg survey of economists called for a 490,000 advance in payrolls and for the unemployment rate to fall to 3.7%.

Shorter-term Treasury yields rose, S&P 500 futures pared gains and the dollar strengthened after the release on expectations that the data will bolster more hawkish Fed policy.

“This is an economy and labor markets overheating, the Fed has to accelerate” its tightening, Jeffrey Rosenberg, senior portfolio manager for systematic multi-strategy at BlackRock Inc., said on Bloomberg Television.

The data suggest that the labor market recovery is continuing at a robust pace as employers have better success filling a near-record number of positions. Inflation, shrinking excess household savings and solid wage growth are factors that could attract more Americans to jobs in the coming months. Covid has also become less of a factor as states broadly lift restrictions.

Fed officials, including Chair Jerome Powell, have said in recent weeks that they would support more aggressive monetary policy to curb decades-high inflation, including a possible 50-basis-point hike at the next policy meeting in May. Central bankers have repeatedly pointed to a strong labor market as one reason that the U.S. economy can handle a series of interest rate hikes that’s expected to extend into next year.

Friday’s report showed average hourly earnings rose 0.4% from February and 5.6% from a year ago, the most since May 2020. However, inflation — at the highest since the early 1980s — is outpacing wage growth, effectively dealing a pay cut to many Americans and starting to dent consumer demand.

Despite the labor-market strength, President Joe Biden’s approval ratings from Americans have suffered due to the surge in inflation. Biden on Thursday announced that the U.S. would release a million barrels of oil a day from reserves for six months to help ease a spike in gasoline prices. He’s scheduled to speak on the jobs report later Friday morning from the White House. 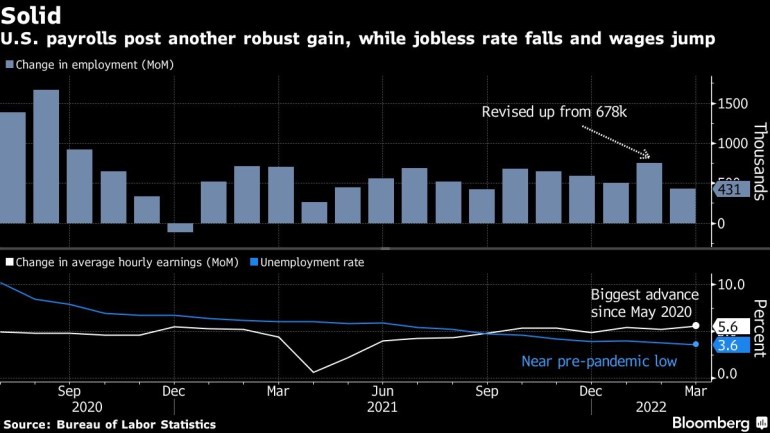 However, as Covid cases broadly decline across the country, Americans are more encouraged to go back to work. The number of employed Americans not at work due to illness fell to the lowest since February 2020.

Unemployment rates fell broadly across all major demographic groups. Notably, participation for prime age women rose by the most since June 2020. The jobless rate for high school graduates without a college degree fell to the lowest since February 2020.