The turmoil on global financial markets intensified Monday as U.S. stocks plunged the most in 17 months and commodity prices relentlessly powering higher as the fallout from war in Ukraine threatened to the global economy.

The S&P 500 sank almost 3% for its worst day since October 2020, while the tech-heavy Nasdaq 100 Index dropped 3.7%. Nickel surged 90% to a record on worry over potential shortages, oil settled at the highest in a decade and wheat approached records after a 7% jump. Earlier, the Euro Stoxx 50 and Germany’s DAX index closed in bear markets. The spread between two-year and 10-year Treasuries briefly dropped below 20 basis points, a level not seen since March 2020 and a bearish sign for the economy.

Russia’s war on Ukraine and the sanctions from U.S. and European allies on Russian assets have sent a jolt through financial markets that were already unsteady after two years of the pandemic and the threat of central banks pulling back on stimulus. Investors have grown leery of owning riskier assets as surging commodity prices exacerbate inflationary pressures that could force policy makers to tamp down growth.

“The longer oil prices and inflation remain elevated — and thereby threaten an early demise of this economic expansion and bull market — the more investors will trim their exposure to equities,” wrote Sam Stovall, chief investment strategist at CFRA. “Investor uncertainty should elevate the angst.”

Markets emerged from the weekend on edge after reports that the Biden administration is considering whether to ban the import of Russian oil and energy products, a move that could add to economic pressure as more companies pull out of the country in response to Moscow’s invasion of Ukraine. European Union governments were divided over whether to join the U.S.

The U.S. bond market’s 10-year inflation forecast jumped to a record 2.785%, while the yield on the benchmark Treasury bond rose 5 basis points at 1.78%. A gauge of the dollar rose for a third day, trading at the highest since 2020. 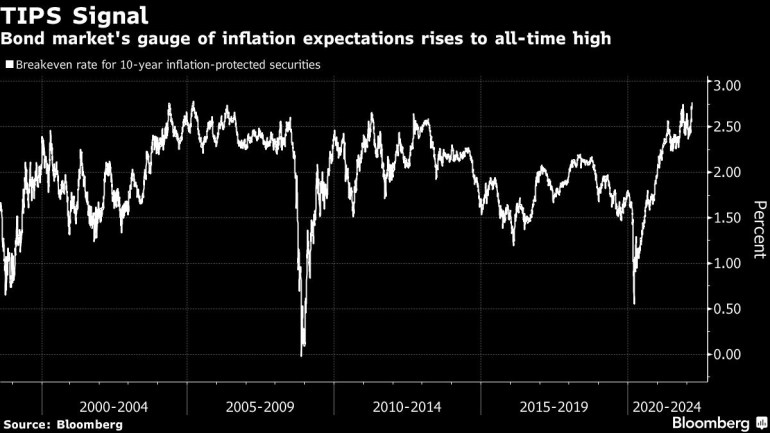 There was no immediate statement from the Russian negotiators. With President Vladimir Putin saying Kyiv must agree to his demands if fighting is to end, the discussions face severe challenges.

Putin signed a decree allowing the government and companies to pay foreign creditors in rubles, seeking to stave off defaults while capital controls remain in place. Still, some holders of a $1.3 billion Gazprom PJSC bond due Monday said they received payment in dollars.

More businesses pulled back on their operations in Russia, including streaming giant Netflix Inc. and social-media service TikTok, which is owned by China-based ByteDance Ltd.

Meanwhile, China warned the U.S. against trying to build what it called a Pacific version of NATO, while declaring that security disputes over Taiwan and Ukraine were “not comparable at all.”

The global economy was already struggling with high inflation due to the pandemic. The Federal Reserve and other key central banks now face the tricky task of tightening monetary policy to contain the cost of living without upending economic expansion or roiling risky assets.

“There’s no easy map for navigating market volatility,” said Saira Malik, chief investment officer at Nuveen. “Volatility is normal late in economic cycles, and it is needed to some degree to generate positive returns in any environment. Investors, however, are concerned that this latest market disruption could hasten the end of the cycle.”