By Pratik Parija and Ruchi BhatiaBloomberg

In a world where people are worrying more than ever about food shortages and rising inflation, India’s warehouses are brimming over with grain and the country’s farmers are gearing up for yet another record harvest.

The country is the top global producer of wheat after China and has the potential to ship 12 million tons to the world market in the 2022-23 year, the most on record, according to the median of five estimates in a Bloomberg survey of traders, millers and analysts. That compares with shipments of 8.5 million tons in 2021-22, U.S. Department of Agriculture data show.

Prices of farm commodities were already on a tear before the Russian invasion of Ukraine as drought shriveled global harvests and demand increased, helping send world food costs to the highest on record. The war made matters even worse because it has choked shipments from one of the planet’s top producing regions, cutting off more than a quarter of the world’s wheat supplies. 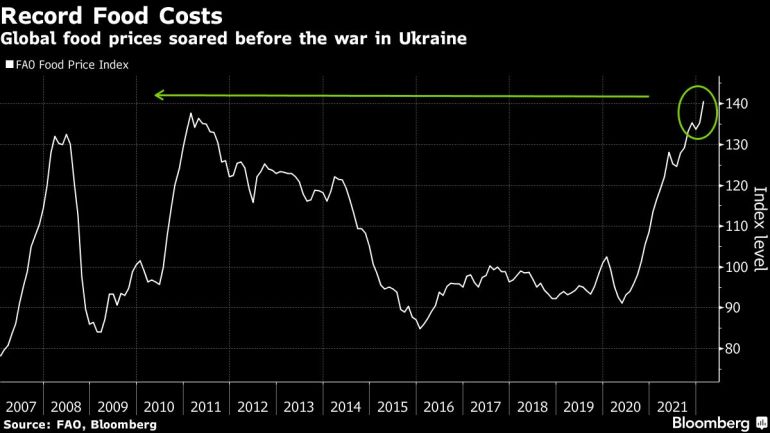 “Indian wheat exports help the market in a tight world supply situation,” said Vijay Iyengar, chairman and managing director of Singapore-based Agrocorp International, which trades about 12 million tons of grain annually. “It helps to keep a lid on global prices as well. If India wasn’t exporting wheat in large quantities, prices would have probably escalated further.”

Benchmark wheat prices in Chicago surged to an all-time high of $13.635 a bushel this month after the Russian invasion, compared with an average of only around $5.50 a bushel in the five years through the day preceding the attack.

Tightening supply and rising prices for grain from major exporting countries have made Indian wheat competitive for the first time in years. With ballooning inventories after five straight record crops, India has a huge exportable surplus. That will be crucial for importers in North Africa and the Middle East where soaring food prices sparked violent uprisings more than a decade ago.

While India has tended to ship wheat mostly to neighboring countries such as Bangladesh and to some Middle Eastern markets, exporters are now likely to find buyers across Africa and in other areas of the Middle Eastern region.

“Practically every market needs to consider Indian wheat now, particularly in the vicinity of Asia, Africa and the Middle East,” said Iyengar, who has traded commodities for more than three decades. “We have not seen this kind of frenzy for Indian wheat in the global market before.”

India is in final talks to start wheat shipments to Egypt, the world’s top buyer, while discussions are in progress with countries such as China, Turkey, Bosnia, Sudan, Nigeria and Iran, the commerce ministry said this month. Wheat exports from India were already up more than fourfold to about 6 million tons in the 10 months through January from a year earlier, government data show.

Shipping times to the Middle East will be longer than from traditional Black Sea exporters Ukraine and Russia, but India is well positioned to step in as a low-cost wheat supplier, according to the USDA’s Foreign Agricultural Service.

Australia, one of the world’s top exporters, is already feeling the heat. Australian wheat is competitively priced, said Jason Craig, chief marketing and trading officer at CBH Group, the biggest shipper. “But Indian wheat is certainly at a lower value,” and “we’re starting to see that compete against Australian wheat in some of our traditional markets,” like Indonesia, he said.

State-run warehouses in India held more than 23 million tons of wheat at the beginning of March, about three times the level required by the government for this time of year, Food Corp. of India data show.