The Conference Board’s index increased to 107.2 from a downwardly revised 105.7 reading in February, which was the lowest in a year, according to the group’s report Tuesday. The median forecast in a Bloomberg survey of economists called for a reading of 107. 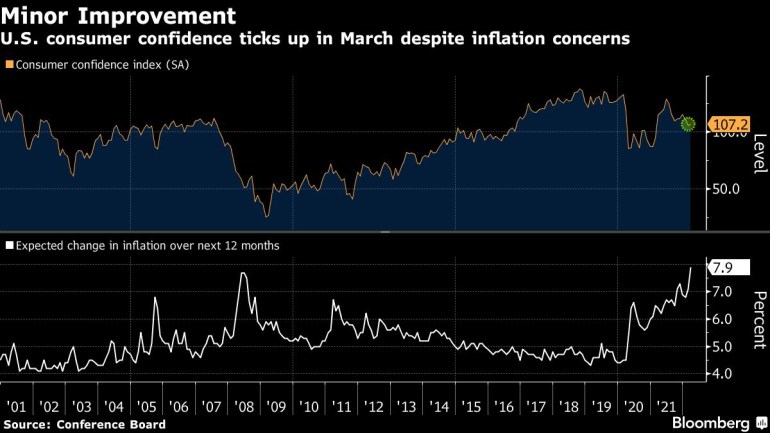 Even though confidence edged higher, Americans are facing the highest inflation since 1982, which is outpacing wage gains and being fanned further by the war in Ukraine. That’s already causing some to limit their purchases of certain goods or services, and a slowdown in consumption would pose a risk to economic growth.

Inflation-adjusted spending data for February will be released Thursday.

Still, steady labor market gains have pushed employment back to pre-pandemic levels in some sectors, buoying U.S. households. The economy probably added close to a half million jobs in March as the unemployment rate fell to 3.7%, according to the median projections in a Bloomberg survey ahead of government data Friday.

The share of consumers who said jobs were “plentiful” increased to a record high 57.2%. A separate report Tuesday showed U.S. job openings remained near a record in February.

Consumers were also mixed about their short-term financial prospects. The share who expect their incomes to rise in the next six months increased, but those who see their pay dropping also rose.

A gauge of current conditions rose by the most since June to 153, suggesting consumers had a more upbeat assessment of business conditions and the labor market. The Conference Board’s expectations index — which reflects consumers’ six-month outlook — declined to 76.6, the lowest since 2014.

Concerns over inflation intensified in March, the report showed. Consumers expect prices to rise 7.9% in the next year, an all-time high.

A measure of home buying conditions held at the lowest since November. Mortgage rates have quickly surged to the highest level in over three years as the Federal Reserve tightens monetary policy to rein in spiraling prices, pushing homeownership out of reach for many aspiring buyers.

“These headwinds are expected to persist in the short term and may potentially dampen confidence as well as cool spending further in the months ahead,” Lynn Franco, senior director of economic indicators at the Conference Board, said in a statement.