Wall Street and individual investors are once again dashing in and out of so-called meme stocks as the appetite for riskier assets revives and volatility grips the group.

A basket of 37 meme stocks tracked by Bloomberg has surged 45% off a March bottom, rallying in 9 of 11 sessions as millions of shares change hands. A flurry of trading activity in out-of-the-money call options — a favored trading method among retail investors seeking to capitalize on rapid gains in an individual stock — have helped fuel the latest swings.

The pick up in that options volume  “suggests that the most speculative retail crowd on WallStreetBets and similar is chasing the rebound aggressively,” said Giacomo Pierantoni at Vanda Securities, which tracks retail-trading flows.

Meme stocks saw a pick-up in retail-investor demand on Monday, Vanda data showed, with AMC Entertainment Holdings Inc. and GameStop Corp. seeing the largest flow of individual investor money in months as both surged higher. Retail traders snapped up $48.1 million in AMC shares Monday, bringing net purchases over the past week to $102.7 million, while GameStop saw a $2.4 million inflow, the most since January, according to Vanda. 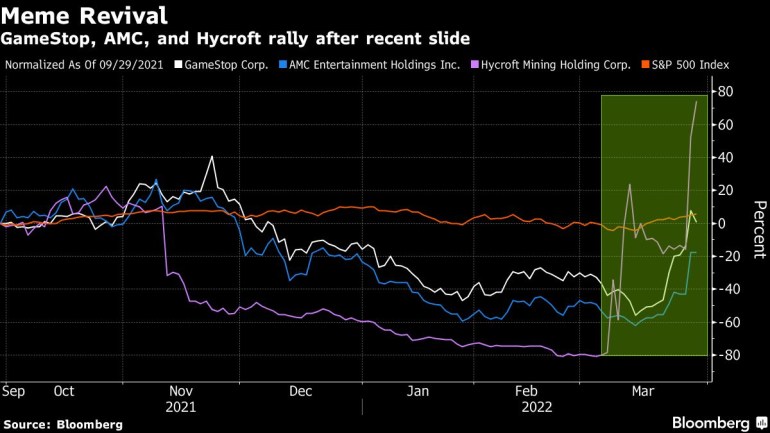 The seller of video-games and the movie-theater firm both closed on Monday at their highest level in at least three months, with AMC extending the gain Tuesday and GameStop giving back a sliver of the rise. While eye-catching, the recent rallies in meme stocks pales in comparison to rallies seen in 2021, when stocks such as GameStop nearly tripled in a single morning.

Still, the stocks’ appeal — and the trading volatility surrounding the memes — is not over yet, according to Ed Moya, senior market strategist at Oanda.

“Some of the favorite meme stocks, AMC and GameStop have long-term visions that include betting on gold mines and crypto,” he said in a message.

AMC gained some 1.9% Tuesday, a modest move compared with the 45% advance Monday. But Hycroft Mining Holding Corp., the gold miner in which AMC bought a 22% stake earlier this month, jumped 11% after rallying 81% on Monday.

Short covering from institutional investors may have boosted the recent surge, analysts said, given retail investors’ contrarian trading approach, which usually pitches them against short sellers. Nearly one-quarter of GameStop shares available for trading are currently sold short, according to data from analytics firm S3 Partners, while AMC’s short interest sits at roughly 21%.

“In a bullish market, professional investors would not try to short these stocks again,” Vanda’s Pierantoni said. “But in this bearish environment/high vol regime, it will be harder to see a melt-up similar to what we had in Q1 2021.”