Businesses’ payrolls rose by 475,000 last month, according to ADP Research Institute data released Wednesday. The median forecast in a Bloomberg survey of economists called for a 375,000 rise. The initial January print showed a 301,000 plunge in the month, the worst since April 2020, but was revised up to a 509,000 gain. 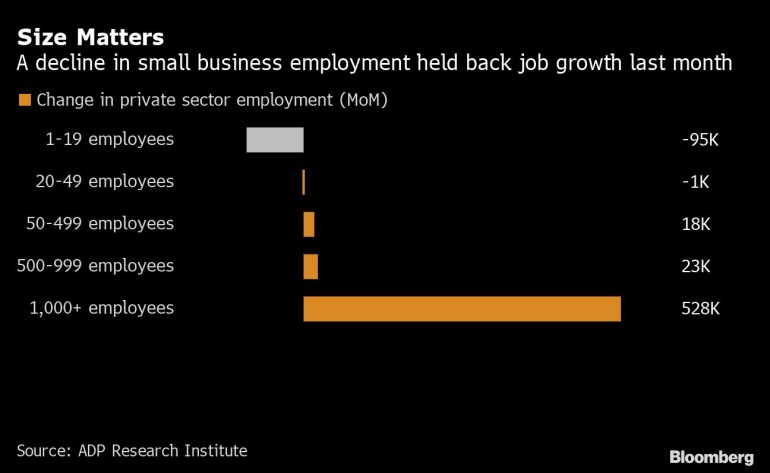 The greater-than-expected job growth points to a labor market rebounding strongly from the omicron variant’s spread in January, which led to business closures and kept many workers at home sick. Covid-19 cases have dropped significantly and restrictions are easing across the country, which should help wary Americans get off the sidelines and back to work.

The data precede Friday’s monthly employment report from the Labor Department, which is currently forecast to show that private payrolls increased by 383,000 in February. The ADP figures don’t always follow the same pattern as the Labor Department’s data.

“Last month large companies showed they are well-poised to compete with higher wages and benefit offerings, and posted the strongest reading since the early days of the pandemic recovery,” ADP Chief Economist Nela Richardson said in a statement.

“Small companies lost ground as they continue to struggle to keep pace with the wages and benefits needed to attract a limited pool of qualified workers,” she said.

Service-provider employment rose by 417,000 in February, led by leisure and hospitality, trade and transportation and professional and business services. Payrolls at goods producers increased by 57,000.

(Adds graphic.)
–With assistance from Jordan Yadoo and Reade Pickert.