Bengaluru, India – A drumbeat of explosions played out in the background as Azam Hassan explained over the phone how he felt like he was living the lyrics of the Eagles classic, Hotel California. “It’s like the song goes,” he said. “You can check out any time you want, but you can never leave.”

The 23-year-old from Morocco is a student at Kharkiv National Medical University, a crown jewel among Ukraine’s higher educational institutions that in recent years have proven a magnet for overseas students – especially of medicine – because of aggressive marketing and low fees. But Kharkiv, the country’s second-biggest city, is now witnessing some of the most intense battles between Ukraine’s soldiers and invading Russian forces. An Indian student in the city was killed in Russian shelling on Tuesday morning.

Hassan has twice tried to escape from the war zone on buses organized by local operators, only for the vehicles to be ordered back. The highways outside Kharkiv are too dangerous for travel amid Russian bombardment, the Ukrainian military told those trying to leave.

So Hassan sat huddled with hundreds of other foreign students in the city’s underground metro, which is doubling as a bomb shelter, as he spoke to Al Jazeera. He does not know when he will be able to get out of Ukraine and get back to his family in Fez. But he is clear about one thing. “Whatever happens, I’m not coming back,” he said.

Ukraine’s sovereignty is at stake. Yet even if the country’s resistance manages to hold off the Russian assault, an important economic engine might struggle to recover: Better known for its export of wheat and corn, this country also earns significant revenue from foreign students.

In fact, international students contribute a greater chunk of Ukraine’s GDP than they do America’s, even though the US is the world’s top destination for foreign education. According to the Ukrainian government, 76,548 international students from 155 nations are enrolled at the country’s universities. India sends more than 18,000 – or nearly a quarter – of those students, followed by Morocco, Turkmenistan, Azerbaijan, Nigeria, China and Turkey. 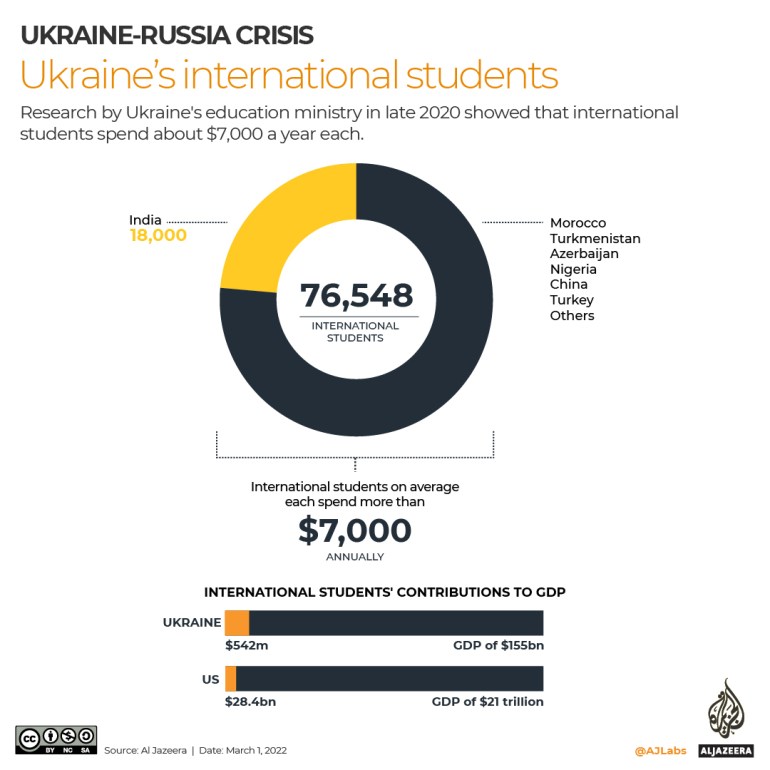 But with the war intensifying, many nations have asked their students to leave the country. Others are not waiting for official government advice. With students fleeing, Ukraine risks bleeding this revenue, said Anatoly Oleksiyenko, director of Hong Kong University’s Comparative Education Research Centre and a leading Ukrainian scholar on post-Soviet education systems, in an interview with Al Jazeera. To mitigate those losses, he said, the nation’s universities must adapt fast “to move the learning processes online, and make the whole educational admissions, participation and progress more flexible.”

That is possible, as many Ukrainian universities already made the shift to hybrid classes during the pandemic, Oleksiyenko pointed out. But Ukrainian government data suggests that tuition fees constitute less than half of the revenue the country earns from foreign students. The rest – what students spend while in Ukraine – will not be recovered through remote classes. There are also practical limitations to teaching medicine online. “How do we practice surgery online, sitting at home far away from our university labs?” asked Hassan.

Indeed, the low fees are a major draw for international students, said Yukti Belwal, co-founder of BookMyUniversity, an Indian education consulting firm that has helped send dozens of students to Ukraine. The annual fee in a top Ukrainian medical school, about $4,000, is less than half of what a comparable private university in India or the US would charge. “Some of the best universities of the former Soviet Union are in Ukraine,” Belwal told Al Jazeera. “And they’re affordable.”

But Ukraine’s success in attracting students, especially from developing nations, is not only about cheap education. Over the past three years, the country has made a concerted effort to promote its universities abroad, said Oleksiyenko, setting up the Ukrainian State Centre for International Education, tasked with attracting foreign students.

“The Ukrainian government took a proactive approach,” Oleksiyenko said. “The way they approached it – to establish it as an enterprise rather than a cultural entity – indicates that the government was pursuing the revenue generation strategy seriously.”

Ukrainian university deans have been visiting India and other major source countries in recent years, trying to nudge potential students towards their medical schools, said Belwal.

Now those gains could unravel. While Ukraine’s economy as a whole has taken a hit, its higher education sector is particularly vulnerable – in part because of geography. Many of the country’s top universities – the VN Karazin Kharkiv National University and the Kharkiv National Medical University are the most popular among foreign students – are in eastern Ukraine, which has borne the brunt of Russia’s invasion. “The possibility of dying in college is the last thing on your mind when you apply to a university,” Vishnu Mohan, an Indian student stuck in Kharkiv, told Al Jazeera, adding that he did not think it likely that he would return if he managed to get out safely.

As countries like India struggled to evacuate their citizens, videos of harrowing experiences – students begging their government for help or getting thrashed at the Ukraine-Poland border – have gone viral on social media. Families considering sending their children abroad for studies will not forget that easily.

Belwal, who is currently in Georgia, said her phone has been ringing nonstop. “Parents are so desperate, so worried about their children,” she said. She organised two chartered planes to get students out of Ukraine before the country closed its airspace to civilian aircraft last week. The Indian government, she said, was simply not doing enough to help students. “They were too late to respond, and then too slow,” she said.

To be sure, Ukraine and its higher education industry are not totally unfamiliar with crises. In 2014, Russia’s annexation of Crimea led to a loss of revenue from universities in that region.

Foreign students in other parts of Ukraine were concerned too, said Belwal, though they were soon reassured because the rest of the country stayed peaceful.

This time, there is no peace anywhere in Ukraine. Universities don’t know what the future holds for them or their country. Some experts remain optimistic that, eventually, Ukraine will once again regain its spot as a popular destination for foreign students.

Its universities could also try and diversify their market by partnering with American and European institutions for joint degrees and programs, Oleksiyenko said.

But none of that will change Hassan’s mind, he insisted. He has already checked out, and is only waiting to leave. For good.