German inflation resumed its ascent, bolstered by a surge in energy costs that’s in danger of intensifying due to Russia’s invasion of Ukraine.

After snapping six straight months of acceleration in January, consumer prices jumped 5.5% from a year earlier in February — more than the 5.4% median estimate of economists surveyed by Bloomberg. A national measure reached 5.1% — the highest since 1992. 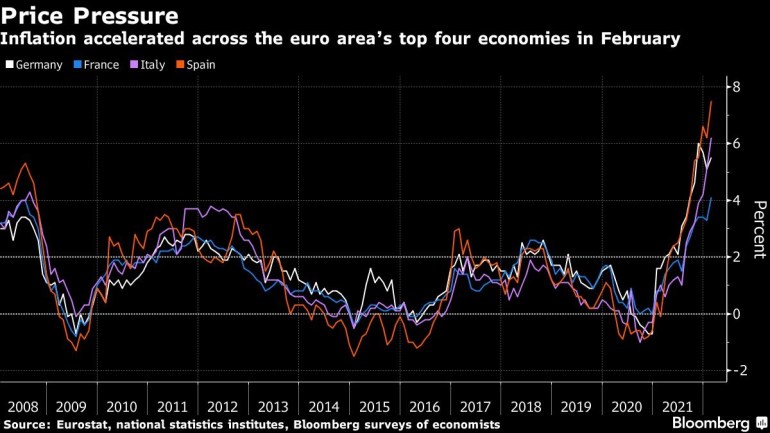 A spike in energy costs is largely to blame for the elevated inflation that’s swept the whole of Europe in recent months. European Central Bank officials warn the situation will likely persist for longer, while President Christine Lagarde has vowed to do whatever is needed to ensure price stability.

The ECB’s Governing Council will discuss monetary policy next week. While the meeting was originally envisaged to further chart the exit from pandemic stimulus, the focus has more recently shifted to how the war in Ukraine will affect the economy — particularly if natural gas deliveries are disrupted.

Initial estimates from the ECB suggest growth may be 0.3 to 0.4 percentage point weaker this year. Staff projections released at next week’s meeting will offer a more detailed assessment.

So far, officials have signaled the war may delay, but not stop, the normalization of monetary policy. Inflation was headed toward the ECB’s medium-term goal before the invasion, warranting preparations to end bond-buying and raise interest rates.

With no sign of the fighting in Ukraine ending, rates traders are betting the European Central Bank will put off raising borrowing costs until 2023.

One key factor central bankers are watching on inflation is whether there are so-called second-round effects, though these are yet to materialize in the euro zone. Data published earlier Tuesday by Germany’s statistics office showed negotiated wages had an average increase of just 1.3% last year — the weakest annual gain since the series started in 2010.