Meta Platforms Inc.’s one-day crash may rank as the worst in stock-market history.

The Facebook parent plunged 22% in early U.S. trading on the back of poor earnings results, putting it on track to erase about $195 billion.

At current levels, that’s the biggest collapse in market value for any U.S. company. But there’s no certainty the losses will hold, especially given the recent volatility that’s whipped across technology shares. Markets have swung wildly in recent weeks, with buy-the-dip traders sometimes storming in during the final hours of the trading day. 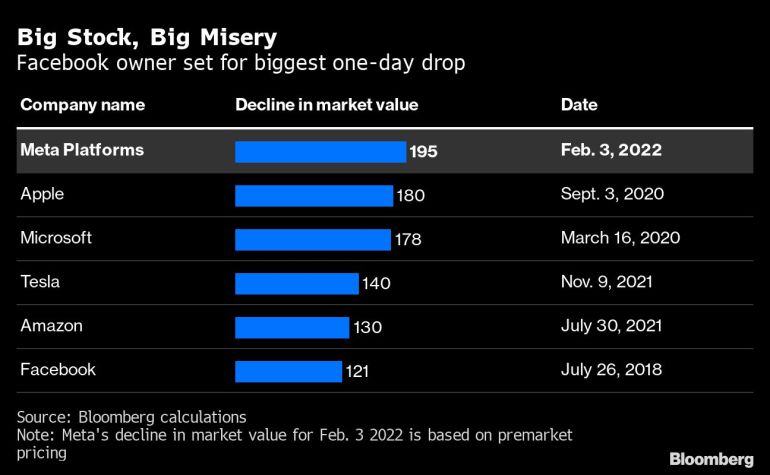 Still, analysts were bleak in their assessments, pointing out that Meta faces stiff competition from rivals like Tiktok and revenue was far lower than expected. Michael Nathanson, an analyst at brokerage Moffett Nathanson, titled his note “Facebook: The Beginning of the End?”

“These cuts run deep,” he wrote. The results were “a headline grabber and not in a good way.”

The sheer size of Facebook’s collapse illustrates just how tech companies have ballooned in size to become behemoths with unprecedented market power, and the drama that can ensue when they stumble.

Another way of illustrating the decline: a 20% decline in Meta would be more than the market value of 452 of the S&P 500’s members.

Meta “finds itself in the middle of a perfect storm” wrote Youssef Squali, an analyst at Truist Securities.

Meta’s market cap as of the previous close stood at roughly $900 billion. The company makes up one of the original Faang cohort of tech megacaps, including Google’s parent Alphabet Inc., Amazon.com Inc. and Apple Inc.

It’s not the first time Meta shares have dropped dramatically. The stock plunged 19% in July 2018 on a slowdown in user growth, translating to a about $120 billion decline in market capitalization. At the time, it set the record for the largest-ever loss of value in one day for a U.S. traded company.

READ: Meta Slump Accounts for Half of Nasdaq 100 Futures Losses