Benchmark Dutch gas futures rose as much as 62%, the most since at least 2005, in their fourth-straight daily advance. German power for March jumped as much as 58%. Coal and oil also surged.

Russia began a full-scale invasion of Ukraine after President Vladimir Putin vowed to “demilitarize” the country and replace its leaders. The attacks have triggered the worst security crisis Europe has faced since World War II and threaten to exacerbate the continent’s energy-supply crunch, already the deepest in decades.

The government in Kyiv declared martial law and pleaded for international support including harsher sanctions, with President Volodymyr Zelenskiy calling on citizens to take up arms. NATO said it is deploying additional land and air forces to member countries near Ukraine. 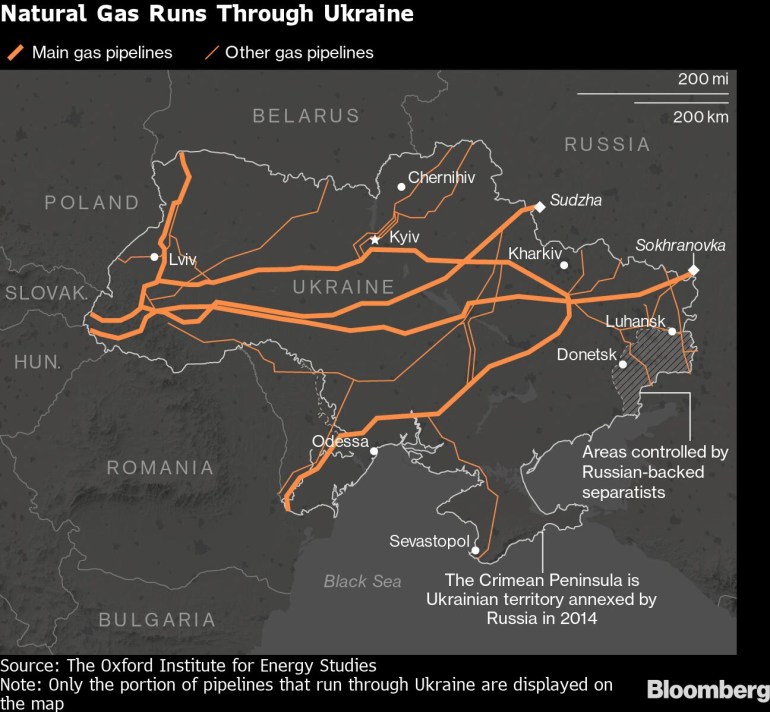 U.S. President Joe Biden is expected to address the crisis around 12:30 p.m. ET, according to a White House official. Leaders from the Group of Seven countries are speaking by phone as countries grapple with how to respond. EU Commission President Ursula von der Leyen said “massive and targeted sanctions” are being readied.

The crisis puts fuel supplies in Europe at further risk. The continent depends on Russia for more than a third of its gas supplies, and about a third of those flows are shipped via Ukraine. Low inventories of the fuel last year sent prices to record levels, and volumes from Russia have been curbed since the second half 2021.

“In the extreme risk case, which we would define as one that has a lasting and material negative impact on global growth, the conflict could escalate to a level that pushes Western nations to accept a disruption of Russia’s energy flow,” analysts from UBS Group AG said in a note Thursday.

Russian gas exporter Gazprom PJSC said Thursday its shipments to Europe via Ukraine were normal. Russian gas flows through Ukraine, which have been low in recent months, actually rose on Thursday amid higher prices, data from Slovakian gas transport operator Eustream AS show. 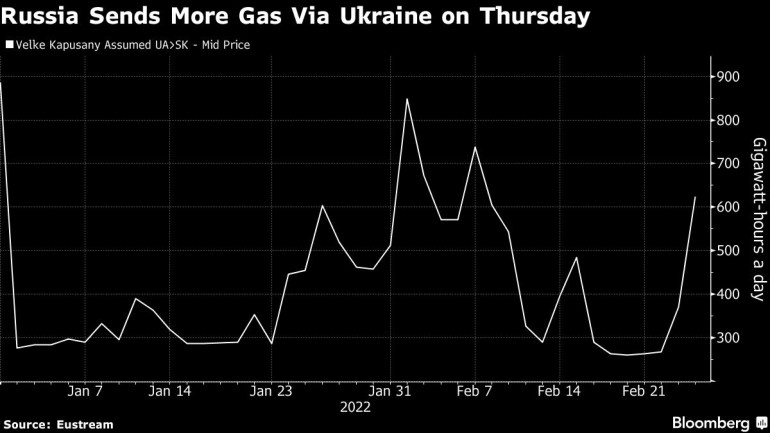 Ukraine’s gas transit operator also said it’s operating normally and that there had been no accidents as of 10 a.m. local time. Austrian refiner OMV AG said Thursday that supplies of natural gas from Russia have continued in line with the company’s contracts with Gazprom.

European coal for next year gained as much as 23%, while oil surged above $105 a barrel for the first time since 2014.

European Union ambassadors unanimously backed a broad Russia sanctions package that had been drafted in the event of a Ukraine invasion, a senior diplomat told Bloomberg News. European leaders will discuss ways to toughen the package when they meet Thursday evening.

Germany earlier this week suspended its certification of the Nord Stream 2 pipeline that would ship gas directly from Russia to Europe. The U.S. on Wednesday added the project to its sanctions on Russia. The pipeline is unlikely to start in the medium term because of the Russian attack, Germany’s Vice Chancellor Robert Habeck said Thursday.

Any sanctions curbing Russia’s access to foreign currency could upend commodity markets from oil and gas, to metals and food. Traders are waiting to see what further penalties will bring — particularly any measures related to oil and gas — and whether Russia will be excluded from the the SWIFT international payment system used by banks.

“If the West were to decide to cut Russia off from SWIFT, payments for Russian gas supplies would become impossible,” said Katja Yafimava, a senior research fellow at the Oxford Institute for Energy Studies. “That would be a cause for contractual force majeure leading to a halt in supplies, with dramatic consequences for European consumers from physical availability and price perspectives.”

(A previous version of this story corrected the size and scope in the second paragraph.)
–With assistance from Isis Almeida, Jesper Starn, Stephen Stapczynski, Elena Mazneva and Daryna Krasnolutska.