Shopify Inc. plunged 17% in Toronto, the most ever, after giving a weaker outlook for growth this year, as online spending resets and consumers face higher inflation.

“The Covid-triggered acceleration of ecommerce that spilled into the first half of 2021 in the form of lockdowns and government stimulus will be absent from 2022,” the Canadian e-commerce firm said in a statement on Wednesday. “There is caution around inflation and consumer spend near term, for the full year.”

As a result, Shopify said full year revenue growth will be lower than the 57% increase in 2021. The Canadian-traded shares fell as much as 19.3%. The company has lost nearly C$100 billion ($78.8 billion) in market value since the start of the year.

Shopify, which provides software and other services that underpin the websites of many small businesses, grew dramatically during the early stages of the pandemic, with sales jumping 86% in 2020. Investors, however, fear the company can’t sustain its growth as shoppers return to more normal buying patterns. Those concerns intensified last month when Shopify said it had terminated contracts with several warehouse and fulfillment partners, sending shares to a 16-month low.

But for the fourth quarter, Shopify beat analysts estimates for revenue and profit.

Revenue increased 41% to $1.38 billion. Analysts, on average, projected $1.34 billion, according to data compiled by Bloomberg. Profit, excluding some items, was $1.36 a share, compared with analysts’ average estimate of $1.26.

Gross merchandise volume, the value of merchants sales flowing through Shopify’s platform, increased 32% in the fourth quarter from a year earlier to $54.1 billion. Analysts, on average, estimated $52.6 billion. 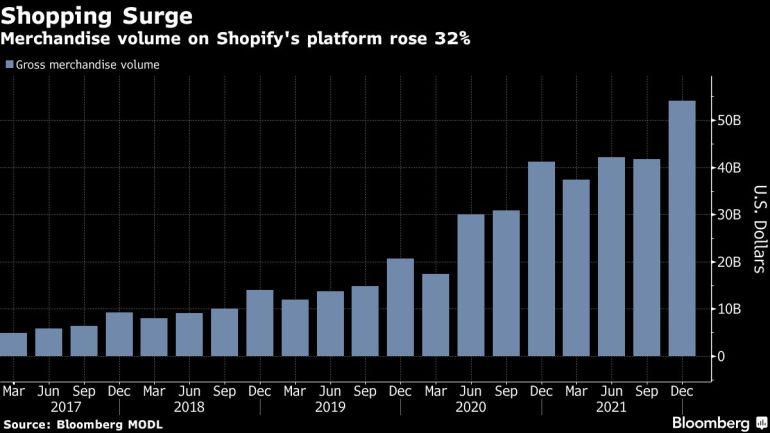 The company’s successful fourth quarter follows a rocky previous period, when the company’s results failed to meet analysts’ estimates for the first time since Shopify went public in 2015. At the time, Shopify cited supply chain issues and rising inflation for the disappointing results.

In its outlook for this year, Shopify also said new contract terms with apps and theme developers that would cause a “headwind” to revenue from its store subscription plans in the first half.